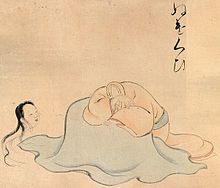 An Edo-period drawing of a nukekubi.

Nukekubi (抜首, written in Chinese characters, meaning Detachable Neck?, also written in Japanese Hiragana characters as "ぬけくび" or Japanese Katakana characters as "ヌケクビ" (But still read as "Nukekubi")) are monsters found in Japanese folklore. By day, nukekubi appear to be normal human beings. By night, however, their heads detach at the neck smoothly from their bodies and fly about independently in search of human prey. These heads attack by screaming (to increase their victims' fright), then closing in and biting.

While the head is detached, the body of a nukekubi becomes inanimate. In some legends, this serves as one of the creature's few weaknesses; if a nukekubi's head cannot locate and reattach to its body by sunrise, the creature dies. Legends often tell of would-be victims foiling the creatures by destroying or hiding their bodies while the heads are elsewhere.

By day, nukekubi often try to blend into human society. They sometimes live in groups, impersonating normal human families. The only way to tell a nukekubi from a normal human being is a line of red symbols around the base of the neck where the head detaches. Even this small detail is easily concealed beneath clothing or jewelry.

In writing a folktale about nukekubi for his book, Kwaidan, Lafcadio Hearn misidentified them as Rokuro-Kubi, an error that also appears in the Fighting Fantasy book, Sword of the Samurai, and in Stephen Dedman's novel The Art of Arrow-Cutting. Rokuro-kubi are a similar but distinct class of beings from Japanese folklore; instead of heads that completely sever, the rokuro-kubi have necks that stretch to enormous lengths during night-time. The book Even More Short & Shivery by Robert D. San Souci has a tale called Rokuro-kubi, but the descriptions in the book are Nukekubi, not Rokurokubi.

Another story that nukekubi have appeared in is the 1998 Hellboy comic book story entitled Heads, collected in the Hellboy anthology The Right Hand of Doom. A group of six nukekubi appear briefly in the animated film Hellboy: Sword of Storms, which is partially adapted from the earlier comic story. The Hellboy Nukekubi appeared in action figure form as a San Diego Comicon exclusive, packaged with a Hellboy toy. The toys were designed and released by Mezco.