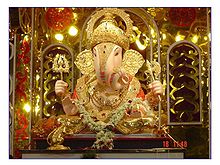 In Hinduism, a murti (Devanagari: मूर्ति), or murthi, or vigraha or pratima[1] typically refers to an image which expresses a Divine Spirit (murta). Meaning literally "embodiment", a murti is a representation of a divinity, made usually of stone, wood, or metal, which serves as a means through which a divinity may be worshiped.[2] Hindus consider a murti worthy of serving as a focus of divine worship only after the divine is invoked in it for the purpose of offering worship.[3] The depiction of the divinity must reflect the gestures and proportions outlined in religious tradition. It is a means of communication with the god or Brahman in Hinduism.[2] Murti is a Sanskrit term which is meant to point to the transcendent "otherness" of the divine[4] and when substituted with statue or idol - its inherent meaning is lost since neither is a correct translation of the word murti.

The murti is regarded by some Mahayana Buddhists (e.g. Muktinath) during worship as a point of devotional and meditational focus. Puja of murtis is recommended, especially for Dvapara Yuga,[5] and described in Pañcaratra texts.

Many Hindus believe everything is God and contains the divine energy of God, so everything is worthy of worship be it the Murti, an icon, or nature itself.[6]

Murti-worship as distinct from idol-worship

The notion that the term murti is equivalent to the English word "idol" is a misconception. The scholar Steven Rosen notes that early European missionaries were largely responsible for conflating the two terms by informing local Hindus that "idol" was the correct translation for "murti".[7] Furthermore, scholar Diana Eck explains that the term murti is defined in Sanskrit as “anything which has definite shape and limits; a form, body, figure; an embodiment, incarnation, or manifestation.” Thus, the murti is more than a likeness; it is the deity itself taken “form".The uses of the word murti in the Upanishads and the Bhagavad-Gita suggest that the form is its essence."[8] Thus, a murti is considered to be more than a mere likeness of a deity, but rather a manifestation of the deity itself.The Murti is like a way to communicate with the abstract one god (Brahman) which creates,sustains and dissolves creation. 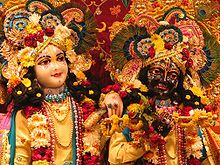 Murtis are typically representations of gods in anthropomorphic or zoomorphic forms like Shiva, Ganesha, Rama, Kali, etc. From a religious point of view, these aspects of God are transcendental and have nothing to do with humanness, zoomorphism or even anthropomorphism, for God is eternal, He is 2 or four-handed, but it is rather so that humans are similar to God, but not that God is created by human and humans ascribe to Him human features: "Those who adhere to the Māyāvāda philosophy of anthropomorphism say, "The Absolute Truth is impersonal, but because we are persons we imagine that the Absolute Truth is also a person." This is a mistake, and in fact just the opposite is true. We have two hands, two legs, and a head because God Himself has these same features. We have personal forms because we are reflections of God." [3]). Although Hinduism is commonly represented by such anthropomorphic religious murtis, aniconism is equally represented with such abstract symbols of God such as the Shiva linga and the saligrama.[9] Furthermore, Hindus have found it easier to focus on anthropomorphic icons, as Lord Krishna said in the Bhagavad Gita, Chapter 12, Verse 5,

Murtis are made according to the prescriptions of the Śilpa Śāstras.[11] They are shaped and formed by special artists known as shilpins. These artists "enter into moods of deep yogic meditation, thus fashioning images not in accordance with fancy but in accordance with scriptural canon"[7] The five-metal alloy Panchaloha is sometimes used.[12] They are installed by priests through the Prana pratishta ('establishing the life') ceremony.

Devotional (bhakti) practices centered on cultivating a deep and personal bond of love with God often include veneration of murtis. Acts of devotion can include awakening the murti in the morning and making sure that it "is washed, dressed, and garlanded."[13] Furthermore, the building of a temple for the murti is considered the highest act of devotion.[13] Some Hindu denominations like Arya Samaj and Satya Mahima Dharma, however, reject it, equating it with an idol worship.[14][15][16]

According to Satguru Sivaya Subramuniyaswami, “This is similar to our ability to communicate with others through the telephone. One does not talk to the telephone; rather the telephone is a way to interact with another person. Without the telephone, one could not have a conversation across long distances; and without the sanctified image in the temple, one cannot easily talk with the Deity.”[17] Moreover, anthropologist Christopher John Fuller notes that an image in Hinduism cannot be equated with a deity and the object of worship is the divine whose power is inside the image, and the image is not the object of worship itself, Hindus believe everything is worthy of worship as it contains divine energy emanating from the one god.[18]

According to the Agamas, the स्थूलमूर्ति / बिम्बमूर्ति (bimbamurti, corporeal idol) is different from the मन्त्रमूर्ति (mantramurti, the idol with power), which is worshipped in classical temples. The mantramurti in the bimbamurti is worshipped only by the use of the appropriate rituals, gestures, hymns and offerings.

The human body as a temple

A common Hindu belief is that the body acts as a temple for the soul. Within that soul resides the Supreme Being. Thus in an attempt to faithfully serve the God that lies within, Hindus must maintain bodily purity. This would include purity via food consumption, personal hygiene, and mental processes. Furthermore, an external, manifest temple helps to keep the internal, intangible temple pure by offering ample opportunity for physical service.[19]

The requirements for the materials, measurements, proportion, decoration and symbolism of the murti are provided in technical manuals known as Shilpashastras. Explanation of the metaphysical significance of each stage of manufacture and the prescription of specific mantras to sanctify the process and evoke and invoke the power of the deity in the image are found in the liturgical handbooks (the Agamas and Tantras).[20] In Southern India, the material used predominantly for murtis is black granite, while material in North India is white marble,but it is not the materials used that matter but the faith and belief of the followers in the one god, Brahman communicating with him, this is the significance of the Puja of the Murti.[21]