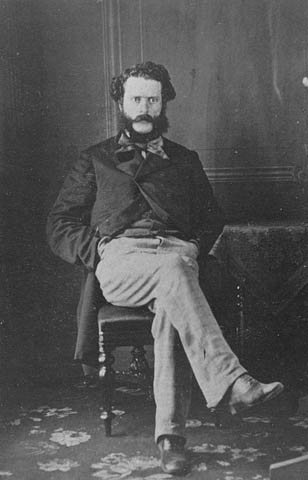 John Robson ( , &ndash; , ) was a Canadian journalist and , who served as the ninth premier of the Province of .

Robson spent his early life as a merchant in southern and . In 1859, upon news of the , Robson moved west to the then from . Unsuccessful at , Robson helped his brother, a Methodist minister, complete construction of a church in , the capital of the new colony. He settled there, and evidently began to become known in reformist circles as an articulate advocate of , for he was shortly hired as editor of a new newspaper, "The British Columbian". His advocacy of devolution of power from the colonial governor, Sir James Douglas, to a democratically-elected assembly brought him into conflict with the august and autocratic Douglas. Douglas governed both British Columbia and the from Victoria, and this absence incurred further complaint from Robson and his paper.

Robson joined forces with other colonial-era editors such as in railing against the Governor and his officials, including Chief Justice Sir . In 1862, Begbie cited contempt of court charges against Robson during the for publishing an unproven allegation that the Chief Justice had accepted a bribe from land speculators. Robson served on the New Westminster town council in the 1860s before being appointed to the British Columbia .

By 1864, Douglas had retired and the colony finally had its own resident governor, . By now, Robson had toned down his rhetoric about responsible government as the colonial assembly began to accrue more power. He was a reluctant supporter of the colony's union with Vancouver Island in 1866, but by 1869, Robson had moved his newspaper's operations across the Strait to Victoria. It was soon bought out by the rival "Daily British Colonist" (today the ""), which had been founded by De Cosmos. There Robson served as political editor for six years, and became a passionate advocate for the colony's union with , formed as a confederation of four colonies of on , . Together with De Cosmos and (also future premiers), Robson founded the Confederation League which lobbied Seymour, as well as and , for British Columbia's entry into Confederation.

Robson's advocacy eventually paid off when British Columbia was admitted as the sixth province on , .

During British Columbia's colonial days, Robson had briefly served in the colonial assembly, but otherwise his political activity was limited to editorializing and lobbying. Once the colony joined confederation in 1871, however, he ran and was elected to the new province's first as a representative for Nanaimo. There he became an opponent of his former ally De Cosmos as well as Premier , and advocated reforms, including . His support for 's Liberals in the 1874 federal election, won him a patronage appointment with the , a position he held for five years. Following this, Robson purchased a newspaper in New Westminster, which he published and edited for two years.

In 1882, after a seven year absence, Robson returned to the provincial legislature as one of the members for New Westminster. He served in various high-profile cabinet portfolios under Premiers and , where he earned a reputation as an advocate for , accelerated settlement, improved and surveys, and subsidies to transportation providers, such as s. He was also a vigorous opponent of land , seeing it as a hindrance to settlement and transforming land into economically viable resources. Perhaps his greatest success came as the leading advocate for constructing the terminus at Granville, and his encouragement of the citizens there to incorporate their locality. It was Robson who was responsible for having the legislature name the new municipality upon its incorporation in 1886.

Upon Davie's death 1889, Robson was appointed premier. In 1890, in order to ease his workload, he moved from representing the busy, growing riding of New Westminster to becoming one of the members for the vast, frontier electoral district of Cariboo in the province's Central Interior. His brief tenure is chiefly remembered for his continued actions to enable , as well as his lobbying the federal government to construct a at , just west of Victoria. Robson remained premier until his death in 1892, which occurred after he hurt his finger in the door of a carriage during a visit to London, and got .

John Robson is interred in the in .

* Robson Cove is located near the entrance to .
* , a major east-west thoroughfare in downtown Vancouver.
* town near Castlegar.
* John Robson Building on