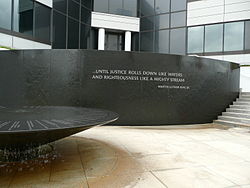 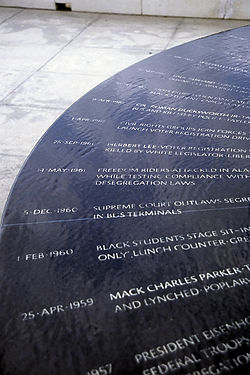 The Civil Rights Memorial is a memorial in Montgomery, Alabama to 40 people who died in the struggle for the equal and integrated treatment of all people, regardless of race, during the Civil Rights Movement in the United States.[1] The memorial is sponsored by the Southern Poverty Law Center.[2]

The names included belong to those who died between 1954 and 1968. Those dates were chosen because in 1954 the U.S. Supreme Court ruled that racial segregation in schools was unlawful and 1968 is the year of Martin Luther King's assassination. The monument was created by Maya Lin who created the Vietnam Veterans Memorial in Washington, D.C.[2] The memorial was dedicated in 1989.[1]

The concept of Maya Lin's design is based on the soothing and healing effect of water. It was inspired by Martin Luther King, Jr.'s paraphrase "... we will not be satisfied until justice rolls down like waters and righteousness like a mighty stream. ...", from the "I Have a Dream" speech, delivered at the Lincoln Memorial, Washington D.C. on August 28, 1963.[2] This passage in King's speech is a direct reference to Amos 5:24, as translated in the King James version of the Bible. The memorial is a fountain in the form of a round stone inverted cone. A film of water flows over the base of the cone, which contains the 40 names included. It is possible to touch the smooth film of water and temporarily alter the surface film, which quickly returns to smoothness. As such, the memorial represents the aspirations of the American civil rights movement against racism.

The memorial is located in an open plaza and may be visited freely from dawn to dusk, 7 days a week.[2] The Civil Rights Memorial Center, located at 400 Washington Avenue, offers guided group tours lasting approximately one hour. Tours are available by appointment, Monday through Saturday.[3]

The memorial is within walking distance of other historic sites including the Dexter Avenue King Memorial Baptist Church, the Alabama State Capitol, the Alabama Department of Archives and History and the Rosa Parks Library and Museum.