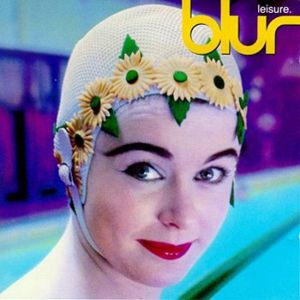 The U.S. version of "Leisure" was front loaded with Blur's three UK singles and the song "Sing" was replaced by the B-side "I Know" (see track listings for exact changes). "Sing" was included on the "Trainspotting" soundtrack in 1996.

The album was released during the waning days of the period in the UK and as a result Blur and "Leisure" were seen as catching the end of a trend. With the release of their second album "" in 1993, Blur would drastically reinvent themselves. In 2007, lead singer was disparaging of "Leisure", opining that "I've made two bad records. The first record, which is awful, and "The Great Escape", which was messy." [cite web | url=http://www.digitalspy.co.uk/music/a46469/damon-albarn-criticises-blur-albums.html?rss | title=Digital Spy - Albarn cusses own albums. | accessdate=2007-05-11 |]

Nonetheless, announced upon the release of 2008's "" that "Sing" from "Leisure" provided a starting point for "Lost!", one of the highlights of the aforementioned Coldplay album. [ [http://www.mtv.com/news/articles/1589032/20080609/coldplay.jhtml?rsspartner=rssColdFusion Coldplay Give Track-By-Track Tour of Viva La Vida - News Story | Music, Celebrity, Artist News | MTV News ] ]

*"She's So High" and "I Know" produced by Steve Lovell and Steve Power
*"Fool", "Birthday" and "Wear Me Down" produced by Mike Thorne
*"Sing", "Inertia" and "Mr. Briggs" produced by Blur
*"There's No Other Way", "Bang", "Slow Down", "Repetition", "Bad Day", "High Cool" and "Come Together" produced by Stephen Street

*"She's So High" and "I Know" was recorded with Steve Lovell and Steve Power during the World Cup 1990. [Blur 3862 days. official history by stuart mcconie]
*In December 1990 Blur return to the studio after releasing "She's So High". However, sessions with Steve Power prove to be problematic, with the two songs "Close" and "Bad Day" as a possible follow up single, but it was simply not working. Producer Stephen Street, had seen the band's video for "She's So High" on the BBC and had wanted to work with them. [http://www.vblurpage.com/info/history/8991.htm]
*"Repetition" was the only track attempted by both Stephen Street and Mike Thorne, Street's was preferred over Thorne's earlier one. [Select 1995 (How did they do that) by David Cavanagh and Stuart Maconie]