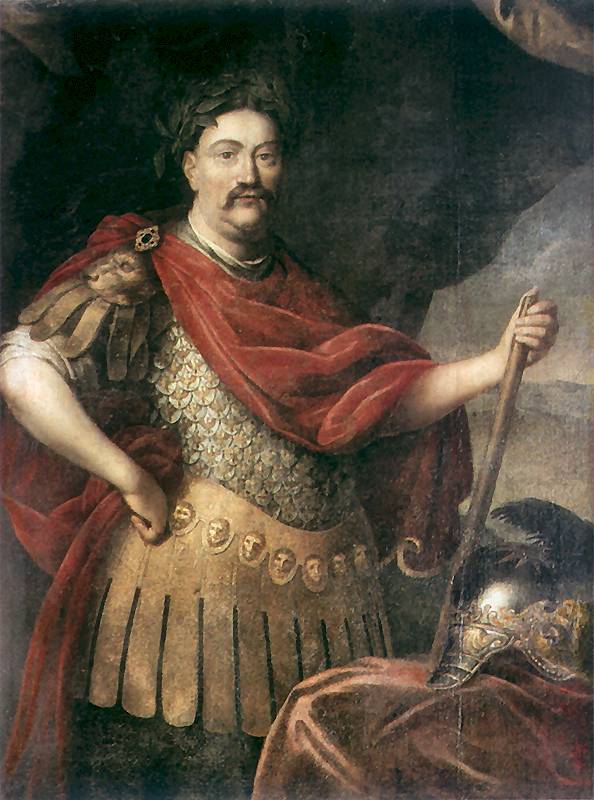 John III Sobieski, ( _pl. Jan III Sobieski) (17 August 1629 - 17 June 1696) was one of the most notable monarchs of the , from 1674 until his death and . Sobieski's 22-year-reign was marked by a period of the Commonwealth's stabilisation, much needed after the turmoil of the Deluge and . Popular among his subjects, he was also a brilliant military commander, most famous for the victory over the Turks in the 1683 . For his victories over the , he was dubbed by the Turks the "Lion of Lechistan."

Jan Sobieski was born 1629 in , a small town near (modern , ), to a notable noble family de Sobieszyn Sobieski of Clan Janina. His father, , was the Palatine of Ruthenia and of ; his mother, was a granddaughter of . After graduating from the Nowodworski College in Kraków, young Jan Sobieski graduated from the philosophical faculty of the . After finishing his studies, together with his brother , Jan left for western Europe, where he spent more than two years travelling. During that time he met major political figures: , and , and learned French, German and Italian, in addition to . This proved to be vital during his later military career.

Both brothers returned to Poland in 1648 and volunteered for the army during the Chmielnicki Uprising. Jan founded his own banner of cavalry and commanded it in the rank of Rotamaster. After the , the brothers were separated and Marek died in captivity the following year. Jan was promoted to the rank of and fought with distinction in the . A promising commander, Jan was sent by King to in the as an envoy. There, Sobieski learned the and studied the Turkish military traditions and tactics.

After the start of the known there as "The Deluge", Jan Sobieski was among the Greater Polish regiments led by , Palatine of Poznań which capitulated at , swearing allegiance to the Swedish king Charles X Gustav. However, in less than a year he returned with his unit to the Polish side, and after April 1656 he fought for the Polish king.

During the three-day long battle of Warsaw of that year, Sobieski brilliantly commanded a 2000 men strong regiment of Tatar cavalry, for which he was promoted to the title of Lord Standard-Bearer of the Crown. A strong supporter of the French faction, Sobieski remained loyal to the King during the infamous , which also helped in his military career. In 1665 he married and was promoted to the rank of Grand Marshal of the Crown and the following year to the rank of Field of the Crown. In 1667 he achieved another great victory over the Cossacks and their Tatar allies in the during the . A famed and much esteemed commander, in February 5, 1668 he achieved the rank of Grand Hetman of the Crown, the highest military rank in the Polish-Lithuanian Commonwealth and the "" of the entire .

During the , on November 11, 1673 Sobieski added yet another brilliant victory to his list, this time defeating the Turks in the battle of Chocim and capturing the mighty fortress located there. The news of the battle spread across the country simultaneously to the news of the recent death of Michał I, King of Poland, who had died only a day before the battle. This made Sobieski one of the most popular personalities in the state and the following year, on May 19, he was elected the new monarch of the Commonwealth. The support of his candidacy was almost complete, with only a dozen or so members of the diet opposing him. Among the most notable partisans of his candidacy was his wife. Jan Sobieski was crowned Jan III February 2, 1676

Although Poland-Lithuania was at that time the largest and one of the most populous states of Europe, Sobieski became a king of a country devastated by almost half a century of constant war, which brought an end to Poland's economic well-being. The treasury was almost empty and the court had little to offer for the powerful s, who often allied themselves with foreign courts rather than the state they lived in. Sobieski decided to stabilise the situation of the country by forcing the Ottomans to accept a peace treaty to end the constant wars on the southern border. In the autumn of 1674 he recommenced the war against the Turks and managed to recapture the mighty fortresses of , Bar and , which re-established a strongly-fortified line defending Poland's southern border in the . Polish historian and others noted, that Sobieski also planned to conquer with Swedish troops already approaching and with monetary French support. This secret pact, later exposed, was doomed because the war with Turkey took too long, by then the Great Elector had made treaties with France, the Swedes were repelled and by opposition from the Commonwealth's , many of them on the Great Elector's side. Sobieski's plan was torpedoed by , the and a supporter of , who simply defected with his army and disbanded it.

In 1675 the Tatars started a counter-offensive and crossed the , but could not retake the strategic town of and the peace treaty was signed soon afterwards. Although Kamieniec Podolski remained a part of Turkey, Poland levelled its significance by the construction of the and return of the town of . With signing of the treaty a period of peace started, much needed to repair the country and strengthen the royal authority. Although constantly harassed by the magnates and foreign courts of and (Austria even tried to oust Sobieski and replace him with Charles of Lorraine), Sobieski completely reformed the Polish military. The military was reorganised into regiments, the infantry finally dropped pikes replacing them with s and the adopted the formations of s and s. Also, Sobieski greatly increased the number of guns and developed a new tactics of artillery.

As a diplomat, Sobieski envisioned an alliance of Poland with France and the Ottomans against the Austrian empire and . However, his plans never came true and finally in 1683 had to be completely abandoned. Conscious that Poland was risking a war against most of its neighbours similar to the Deluge and was lacking allies, Sobieski allied himself with Leopold I, the . The alliance, although aimed directly against Turks and indirectly against France, had the advantage of gaining support for the defence of Poland's southern borders.

In the spring of that year royal spies uncovered Turkish preparations for a military campaign, and Sobieski feared that the target might be the Polish cities of and . To prevent the risk, Sobieski started the fortification of the cities and ordered universal military .

Sobieski's military prowess demonstrated in war against the contributed to his election as King of Poland. One of his ambitions was to unify Christian Europe in a crusade to drive the Turks out of Europe. He joined the alliance of the and joined the Holy League initiated by to preserve Christendom.

Sobieski's greatest success came on September 12, 1683 with his victory at the , in joined command of Polish, Austrian and German troops, against the invading Turks under .

Upon reaching Vienna, he joined up with the Austrians and Germans. Sobieski had planned to attack on the 13th of September, but with Turkish undermining efforts being close to succeeding, he ordered full attack on September 12. At 04:00 a united army of about 81,000 men attacked a Turkish army that numbered about 130,000 men which were divided between attacking the town walls and fighting off the united army. At about five o'clock in the afternoon, after observing the infantry battle from the hilltop, Sobieski led four cavalry groups into a charge down the hillside. Soon, the Turkish battle line was broken and the Ottoman forces scattered in confusion. At 17:30, Sobieski entered the deserted tent of Kara Mustafa and the battle of Vienna was over.

The Pope and other foreign dignitaries hailed Sobieski as the "Savior of Vienna and Western European civilization." [cite book |title= Great Men and Women of Poland |last= Mizwa |first= Stephen Paul |year= 1942 |publisher= Macmillan |location= New York |pages= p. 103] In a letter to his wife he wrote, "All the common people kissed my hands, my feet, my clothes; others only touched me, saying: 'Ah, let us kiss so valiant a hand!'"

King Jan III Sobieski, nicknamed by the Turks the "Lion of Lehistan", and the last great king of Poland, died in , on June 17, 1696. His wife, Maria Kasimira, died in 1716 in , France and her body was returned to Poland. They are interred together in , , .

King Jan III was succeeded by Augustus II who stayed in power primarily because of Russian support. On his death in 1733, a struggle for the crown of Poland ensued, referred to as the .

* After World War II, a statue of Jan III Sobieski was "repatriated" to from the Ukrainian city of ( _pl. Lwów, formerly in the ). The statue overlooks a little park at the old Gdańsk museum.

* The legend of the origins of the refer to Jan III Sobieski as the king to whom a baker gave the very first bagel in commemoration of a military victory in 1683. The round bagels were said to resemble the s of Sobieski and his mounted warriors.