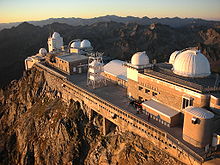 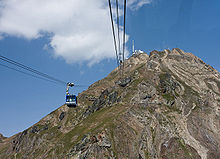 The aerial tramway to The observatory

Construction of the observatory began in 1878 under the auspices of the Société Ramond,[1][2] but by 1882 the society decided that the spiralling costs were beyond its relatively modest means, and yielded the observatory to the French state, which took it into its possession by a law of 7 August 1882. The 8 meter dome was completed in 1908, and housed a mechanical equatorial reflector. In 1946 Mr. Gentilli funded a dome and 60 cm, and in 1958 a spectrograph was installed.

A 106-centimetre (42-inch) telescope was installed in 1963 funded by NASA, and was used to take detailed photographs of the surface of the Moon in preparation for the Apollo missions. In 1965 the astronomers Pierre and Janine Connes were able to formulate a detailed analysis of the composition of the atmospheres on Mars and Venus, based on the infrared spectra gathered from these planets. The results showed atmospheres in chemical equilibrium. This served as a basis for James Lovelock, a scientist working for the Jet Propulsion Laboratory in California, to predict that those planets had no life - a fact that would be proven and scientifically accepted years after.[3]

A 2 meter telescope, known as the Bernard Lyot Telescope was placed at the observatory in 1980 on top of a 28 meter column built off to the side to avoid wind turbulence affecting the seeing of the other telescopes. It is the largest telescope in France. The observatory also has a coronograph, which is used to study the solar corona. A 60-centimetre telescope (the Gentilly's T60 telescope) is also located at the top of Pic du Midi. Since 1982 this T60 is dedicated to amateur astronomy and managed by a group of amateurs, called association T60.

There are currently at the top:

Saturn's moon Helene (Saturn VII or Dione B), was discovered by Pierre Laques and Jean Lecacheux in 1980 from ground-based observations at Pic du Midi Observatory,[5] and named Helene in 1988. It is also a trojan moon of Dione.

Panoramic view toward south from the observatory