(Georg) Daniel Schultz the Younger (1615–1683) was a famous painter of the Baroque era, born and active in the Polish–Lithuanian Commonwealth.[1] He painted many Polish and Lithuanian nobles, members of the royal family, local Patricians, such as the astronomer Johannes Hevelius, and animals.[2]

Born probably around 1615 in Danzig (Gdańsk),[3] in Polish Prussia,[4] a part of the Polish–Lithuanian Commonwealth. Schultz learned the art of painting from his uncle, Daniel Schultz the Elder (died 1646), another important painter, working in his workshop for about five years.[2] After his uncle's death he went to France and the Netherlands to continue his studies for about three years.[2] 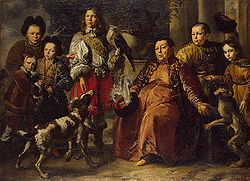 He became the leading artist at the Warsaw court of the Polish kings in the second half of the 17th century as well.[2] In 1649 he became a private painter to the Polish king John II Casimir Vasa, and then to successor kings Michael Wiśniowiecki and John III Sobieski.[2] Schultz returned to his hometown around 1660, yet from time to time worked on royal commissions in Warsaw, often in the Wilanów Palace.[2] His great portraits of Polish kings and nobles are among the best examples of Baroque art in Poland. The most notable of his works Crimean Falconer of King John II Casimir with his Family (also known as The Family Portrait, today in the State Hermitage Museum in St. Petersburg) was painted in 1664.[2] It depicts Crimean Agha Dedesh (or Dedis) with his sons and servants.[5][6] The eldest son of Agha was entitled Royal Falconer in reward for his father's support during the Polish war with Russia (1654–1667). This work was painted during Agha's visit to Warsaw after successful invasion of the Left-bank Ukraine (1663–1664).[6] Rich color variations of cerise, dark green and orange create an ideal composition with silver-brown tone of the painting. Some of the portraits of John II are also well known - en pied propaganda portrait in Polish costume, when he was leading the Berestechko expedition and so-called Bielany portrait in armour with black glow of burning Kraków in background.[7]

His greatest activity occurred during the reign of John II.[2] At that time Schultz painted many portraits and religious paintings. For the abdicating king he painted Saint Casimir, which was later displayed in the Abbey of Saint-Germain-des-Prés in Paris (missing).[2] After king's death, he painted his coffin portrait (now at the Royal Castle in Warsaw), that was later placed in the Marble Room at the Royal Castle among preserved 22 effigies of the Polish monarchs by Peter Danckerts de Rij.[2] The inspirations of Rembrandt and Philippe de Champaigne are visible in his works. During his career at the court he probably had contact with some Rembrandt's works, as king John II was a passionate collector of Dutch paintings and by his agent in Amsterdam, Gerrit van Uylenburgh, he purchased many of his works (The bath of Diana, Actaeon among others).[8][9]

Schultz lived in Gdańsk at the same time as the engraver Jeremias Falck (ca. 1620–1664), who often engraved portraits after Schultz's paintings.