Chalmers University of Technology (Swedish: Chalmers tekniska högskola, often shortened to Chalmers), is a Swedish university located in Gothenburg that focuses on research and education in technology, natural science and architecture.

The University was founded in 1829 following a donation by William Chalmers (1748–1811), a director of the Swedish East India Company, whose ships sailed across the world to supply Europe with goods from the East. He donated some of his fortune for the establishment of an "industrial school". Chalmers was run as a private institution until 1937, when the institute became a state-owned university. In 1994, the school once again became a private institution, owned by a foundation. Chalmers is one of only three universities in Sweden which are named after a person, the other two being Karolinska Institutet and Linnaeus University.

On 1 January 2005, the old schools were replaced by new departments:

In addition to these, Chalmers is home to six national competence centres in key fields like Mathematical Modelling, Environmental Science and Vehicle Safety (SAFER).

Approximately 40% of Sweden's graduate engineers and architects are educated at Chalmers. Each year, around 250 post graduate degrees are awarded as well as 850 graduate degrees. About 1,000 post-graduate students attend programmes at the university and many students are taking Master of Science engineering programmes and the Master of Architecture programme. From 2007, all Master's programmes are taught in English for both national and international students. This was a result of the adaptation to the Bologna process that started in 2004 at Chalmers (as the first technical university in Sweden). Currently, about 10% of all students at Chalmers come from countries outside Sweden to enroll in a Master's or PhD programme.

Chalmers confers honorary doctoral degrees to people outside the university who have shown great merit in their research or in society.

Chalmers is an aktiebolag with 100 shares à 1,000 SEK,[2] all of which is owned by a private foundation (Chalmers University of Technology Foundation) which appoints the university board and the president. The foundation has its members appointed by the Swedish government (4 to 8 seats), the departments appoints one member, the student union appoints one member and the president automatically gains one chair.[3] Each department is led by a department head, usually a member of the faculty of that department. The faculty senate represents members of the faculty when decisions are taken. 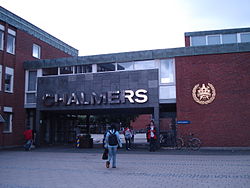 In 1937, the school moved from the city center to the new Gibraltar Campus, named after the mansion which owned the grounds, where it is now located. The Lindholmen College Campus was created in the early 1990s and is located on the island of Hisingen. Campus Johanneberg and Campus Lindholmen, as they are now called, are connected by bus line number 16, but there have been numerous complaints that the campuses are too isolated from each other.

In Chalmers, tradition is taken very seriously. From the pompous graduation ceremony to the for-fun Cortège procession, everything is based on long-standing traditions.

Chalmers has partnerships with major industries mostly in the Gothenburg region such as Ericsson, Volvo and SKF. The University has general exchange agreements with many European and US universities and maintains a special exchange program agreement with National Chiao Tung University (NCTU) in Taiwan where the exchange students from the two universities maintains offices for, among other things, helping local students with applying and preparing for an exchange year as well as acting as representatives (NCTU Europe – NCTU students at Chalmers, Chalmers Asia – Chalmers students at NCTU). It contributes also to the Top Industrial Managers for Europe (TIME) network.

A close collaboration between the Department of Computer Science and Engineering at Chalmers and ICVR at ETH Zurich is being established.

In the latest (2010) Academic Ranking of World Universities, in Engineering and Technology the university was ranked within top 52–75 best universities in the world[4] and at the same time by the QS World University Rankings the university was ranked 204th in the world (overall),[5] ranking 76th for Engineering and Technology[6] and 120th for the Natural Sciences.[7] In the 2011 International Professional Ranking of Higher Education Institutions, which is established on the basis of the number of alumni holding a post of Chief executive officer (CEO) or equivalent in one of the Fortune Global 500 companies, Chalmers University of Technology ranked 38th in the world, ranking 1st in Sweden and 15th in Europe.[8]

Although the official Swedish title for the head is "rektor", the university now uses "President" as the English translation.