Behavioral modernity is a term used in anthropology, archeology and sociology to refer to a set of traits that distinguish present day humans and their recent ancestors from both living primates and other extinct hominid lineages. It is the point at which Homo sapiens began to demonstrate a reliance on symbolic thought and to express cultural creativity. These developments are often thought to be associated with the origin of language.[1]

There are two main theories regarding when modern human behavior emerged.[2] One theory holds that behavioral modernity occurred as a sudden event some 50 kya (50,000 years ago) in prehistory, possibly as a result of a major genetic mutation or as a result of a biological reorganization of the brain that led to the emergence of modern human natural languages.[3] Proponents of this theory refer to this event as the Great Leap Forward[4] or the Upper Paleolithic Revolution.

The second theory holds that there was never any single technological or cognitive revolution. Proponents of this view argue that modern human behavior is the result of the gradual accumulation of knowledge, skills and culture occurring over hundreds of thousands of years of human evolution.[5] Proponents of this view include Stephen Oppenheimer in his book Out of Eden, and John Skoyles and Dorion Sagan in their book Up from Dragons: The evolution of human intelligence.

Modern human behavior is observed in cultural universals which are the key elements shared by all groups of people throughout the history of humanity. Examples of elements that may be considered cultural universals are language, religion, art, music, myth, cooking, games, and jokes. While some of these traits distinguish Homo sapiens from other species in their degree of articulation in language based culture, some have analogues in animal ethology. Since cultural universals are found in all cultures including some of the most isolated indigenous groups, scientists believe that these traits must have evolved or have been invented in Africa prior to the exodus.[6][7][8][9]

A more terse definition of the evidence is the behavioral B's: blades, beads, burials, bone toolmaking, and beauty.[10]

Whether modern behavior emerged as a single event or gradually is the subject of vigorous debate.

Advocates of this theory argue that the great leap forward occurred sometime between 50-40 kya in Africa or Europe. They argue that humans who lived before 50 kya were behaviorally primitive and indistinguishable from other extinct hominids such as the Neanderthals or Homo erectus. Proponents of this view base their evidence on the abundance of complex artifacts, such as artwork and bone tools of the Upper Paleolithic, that appear in the fossil record after 50 kya. They argue that such artifacts are absent from the fossil record from before 50 kya, indicating that earlier hominids lacked the cognitive skills required to produce such artifacts.

Jared Diamond states that humans of the Acheulean and Mousterian cultures lived in an apparent stasis, experiencing little cultural change. This was followed by a sudden flowering of fine toolmaking, sophisticated weaponry, sculpture, cave painting, body ornaments, and long-distance trade.[11] Humans also expanded into hitherto uninhabited environments, such as Australia and Northern Eurasia.[11]

The Great Leap Forward was concurrent with the extinction of the Neanderthals, and it has been suggested that Cro-Magnon interaction with Neanderthals caused this extinction. 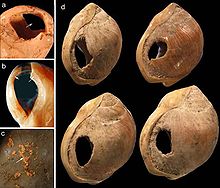 Nassarius kraussianus shell beads from the 75,000 year old levels at Blombos Cave; a) aperture made with bone tool

Proponents of the continuity hypothesis hold that no single genetic or biological change is responsible for the appearance of modern behavior. They contend that modern human behavior is the result of sociocultural and sociobiological evolution occurring over hundreds of thousands of years.

Continuity theorists base their assertions on evidence of aspects of modern behavior that can be seen in the Middle Stone Age (approximately 250 - 50 kya) at a number of sites in Africa and the Levant. For example, a ritual burial with grave goods at Qafzeh is Middle Stone Age (MSA) having been dated to 90 kya. The usage of pigment is noted at several MSA sites in Africa dating back more than 100 kya.

Continuity theorists believe that what appears to be a technological revolution at the onset of the Upper Paleolithic is most likely a result of increased cultural exchange resulting from a growing human population[citation needed]. Some continuity theorists also argue that the rapid pace of cultural evolution during the Upper Paleolithic transition may have been triggered by adverse environmental conditions such as aridity arising from glacial maxima.[1] They further dispute that anatomical modernity predates behavioral modernity, stating that changes in human anatomy and behavioral changes occurred stepwise.[5] The findings of Curtis Marean and his colleagues of fishing and symbolic behavior dating to 164,000 years ago on the southern African coast strongly support this analysis.[12]