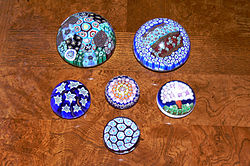 Murano glass is a famous product of the Venetian island of Murano. Located off the shore of Venice, Italy, Murano has been a commercial port as far back as the 7th century. By the 10th century, the city had become well known for its glassmakers,[1] who created unique Murano glass. While Murano glassmakers have settled and operate elsewhere, some say authentic Murano glass is fabricated only in Murano.[2]

It is believed that glassmaking in Murano originated in 9th century Rome, with significant Asian and Muslim influences, as Venice was a major trading port. Murano’s reputation as a center for glassmaking was born when the Venetian Republic, fearing fire and destruction of the city’s mostly wooden buildings, ordered glassmakers to move their foundries to Murano in 1291. Murano glass is still interwoven with Venetian glass.

Murano's glassmakers were soon the island’s most prominent citizens. By the 14th century, glassmakers were allowed to wear swords, enjoyed immunity from prosecution by the Venetian state, and found their daughters married into Venice’s most affluent families. However glassmakers were not allowed to leave the Republic. Many craftsmen took this risk and set up glass furnaces in surrounding cities and as far afield as England and the Netherlands.

By the end of the 16th century, three thousand of Murano island's seven thousand inhabitants were involved in some way in the glassmaking industry.

Murano’s glassmakers held a monopoly on quality glassmaking for centuries, developing or refining many technologies including crystalline glass, enamelled glass (smalto), glass with threads of gold (aventurine), multicoloured glass (millefiori), milk glass (lattimo), and imitation gemstones made of glass. Today, the artisans of Murano are still employing these century-old techniques, crafting everything from contemporary art glass and glass figurines to Murano glass chandeliers and wine stoppers.

Today, Murano is home to a vast number of factories and a few individual artist's studios making all manner of glass objects from mass marketed stemware to original sculpture. The Museo Vetrario (Glass Museum) in the Palazzo Giustinian, which holds displays on the history of glassmaking as well as glass samples ranging from Egyptian times through the present day.

Murano Glass was produced in great quantities in the 1950s and 1960s for export and for tourists.[3]

The art of glassmaking

The process of making Murano glass is rather complex. Most Murano glass art is made using the lampworking technique. The glass is made from silica, which becomes liquid at high temperatures. As the glass passes from a liquid to a solid state, there is an interval wherein the glass is soft before it hardens completely, allowing the artisan to shape the material.

The other raw materials, called flux or melting agents, soften at lower temperatures. The more sodium oxide present in the glass, the slower it solidifies. This is important for hand-working because it allows the glassmaker more time to shape the material. The various raw materials that an artisan might add to a glass mixture are sodium (to make the glass surface opaque), nitrate and arsenic (to eliminate bubbles) and colouring or opacifying substances.

Colours, techniques and materials vary depending upon the look a glassmaker is trying to achieve. Aquamarine is created through the use of copper and cobalt compounds, whereas ruby red uses a gold solution as a colouring agent.

Murrine technique begins with the layering of colored liquid glass, which is then stretched into long rods called canes (see caneworking). When cold, these canes are then sliced in cross-section, which reveals the layered pattern. The better-known term "millefiori" is a style of murrine that is defined by each layer of molten color being molded into a star, then cooled and layered again. When sliced, this type of murrine has the appearance of many flowers, thus mille- (thousand) fiori (flowers).

Filigree (a type of caneworking), glass engraving, gold engraving, incalmo, lattimo, painted enamel, ribbed glass and submersion are just a few of the other techniques a glassmaker can employ.

Sommerso (lit. "submerged" in Italian), or "sunken glasses", is a form of artistic Murano glass that has layers of contrasting colors (typically two), which are formed by dipping the object in molten glass; the outermost layer, or casing, is often clear. Sommerso was first developed in Murano during the late thirties and was made popular by Seguso d'Arte in the fifties. This process is a popular technique for vases, and is sometimes used for sculptures.

Special tools are essential for Murano artisans to make their glass. Some of these tools include borselle (tongs or pliers used to hand-form the red-hot glass), canna da soffio (blowing pipe), pontello (an iron rod to which the craftsman attaches the object after blowing in order to add final touches), scagno (the glass-master's workbench) and tagianti (large glass-cutting clippers).

In The Sopranos episode, "A Hit Is a Hit", Tony Soprano's neighbor, Jean Cusimano, hosts a dinner party, at which she comments about the Soprano home: "Oh, but that bar with the goombah Murano glass". Dinner party guest (and Tony's psychiatrist), Dr. Jennifer Melfi, responds: "I like Murano glass". This exchange occurred in the context of a larger conversation that addressed the blurred distinctions amongst various socio-economic classes of Italian-Americans and between gangsters and successful professionals.[5]