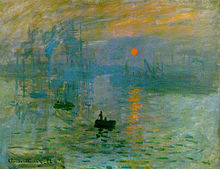 Art historians and philosophers of art have long had classificatory disputes about art regarding whether a particular cultural form or piece of work should be classified as art. Disputes about what does and does not count as art continue to occur today.[1]

Defining art can be difficult. Aestheticians and art philosophers often engage in disputes about how to define art, and most disputes about an individual art pieces value revolve around the very definition of art.

By its original and broadest definition, art (from the Latin ars, meaning "skill" or "craft") is the product or process of the effective application of a body of knowledge, most often using a set of skills; this meaning is preserved in such phrases as "liberal arts" and "martial arts". However, in the modern use of the word, which rose to prominence after 1750, “art” is commonly understood to be skill used to produce an aesthetic result (Hatcher, 1999).

Britannica Online defines it as "the use of skill and imagination in the creation of aesthetic objects, environments, or experiences that can be shared with others"[2]. But how best to define the term “art” today is a subject of much contention; many books and journal articles have been published arguing over even the basics of what we mean by the term “art” (Davies, 1991 and Carroll, 2000). Theodor Adorno claimed in 1969 “It is self-evident that nothing concerning art is self-evident any more.” It is not clear who has the right to define art. Artists, philosophers, anthropologists, and psychologists all use the notion of art in their respective fields, and give it operational definitions that are not very similar to each other's.

The second, more narrow, more recent sense of the word “art” is roughly as an abbreviation for creative art or “fine art.” Here we mean that skill is being used to express the artist’s creativity, or to engage the audience’s aesthetic sensibilities. Often, if the skill is being used in a lowbrow or practical way, people will consider it as craft rather than art. Likewise, if the skill is being used in a commercial or industrial way, it will be considered design instead of art. On the other hand, crafts and design are sometimes considered applied art. Some thinkers have argued that the difference between fine art and applied art has more to do with value judgments made about the art than any clear definitional difference (Novitz, 1992).

Many have argued that it is a mistake to even try to define art or beauty, that they have no essence, and so can have no definition. Often, it is said that art is a cluster of related concepts rather than a single concept. Examples of this approach include Morris Weitz and Berys Gaut. 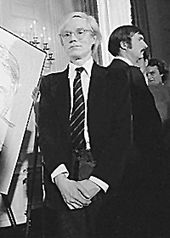 Another approach is to say that “art” is basically a sociological category, that whatever art schools and museums, and artists get away with is considered art regardless of formal definitions. This institutional theory of art has been championed by George Dickie. Most people did not consider a store-bought urinal or a sculptural depiction of a Brillo Box to be art until Marcel Duchamp and Andy Warhol (respectively) placed them in the context of art (i.e., the art gallery), which then provided the association of these objects with the values that define art.

Proceduralists often suggest that it is the process by which a work of art is created or viewed that makes it, art, not any inherent feature of an object, or how well received it is by the institutions of the art world after its introduction to society at large. For John Dewey, for instance, if the writer intended a piece to be a poem, it is one whether other poets acknowledge it or not. Whereas if exactly the same set of words was written by a journalist, intending them as shorthand notes to help him write a longer article later, these would not be a poem.

Leo Tolstoy, on the other hand, claims that what makes something art or not is how it is experienced by its audience, not by the intention of its creator. Functionalists, like Monroe Beardsley argue that whether a piece counts as art depends on what function it plays in a particular context. For instance, the same Greek vase may play a non-artistic function in one context (carrying wine), and an artistic function in another context (helping us to appreciate the beauty of the human figure).

Philosopher David Novitz has argued that disagreements about the definition of art are rarely the heart of the problem, rather that “the passionate concerns and interests that humans vest in their social life” are “so much a part of all classificatory disputes about art” (Novitz, 1996). According to Novitz, classificatory disputes are more often disputes about our values and where we are trying to go with our society than they are about theory proper. For example, when the Daily Mail criticized Damien Hirst and Tracey Emin’s work by arguing "For 1,000 years art has been one of our great civilising forces. Today, pickled sheep and soiled beds threaten to make barbarians of us all" they are not advancing a definition or theory about art, but questioning the value of Hirst’s and Emin’s work.

On the other hand, Thierry de Duve[3] argues that disputes about the definition of art are a necessary consequence of Marcel Duchamp's presentation of a readymade as a work of art. In his 1996 book Kant After Duchamp he reinterprets Kant's Critique of Judgement exchanging the phrase "this is beautiful" with "this is art", using Kantian aesthetics to address post-Duchampian art.

In the late 19th century, photography and cinema were both considered not to be art, and prominent critics argued that early cubist paintings were not art.

The work of the French artist Marcel Duchamp from the 1910s and 1920s paved the way for the conceptualists, providing them with examples of prototypically conceptual works (the readymades, for instance) that defied previous categorisations. Conceptual art emerged as a movement during the 1960s. The first wave of the "conceptual art" movement extended from approximately 1967 to 1978. Early "concept" artists like Henry Flynt, Robert Morris and Ray Johnson influenced the later, widely-accepted movement of conceptual artists like Dan Graham, Hans Haacke, and Douglas Huebler.

More recently, the “Young British Artists” (YBAs), led by Damien Hirst, came to prominence in the 1990s and their work is seen as conceptual, even though it relies very heavily on the art object to make its impact. The term is used in relation to them on the basis that the object is not the artwork, or is often a found object, which has not needed artistic skill in its production. Tracey Emin is seen as a leading YBA and a conceptual artist, even though she has denied that she is and has emphasised personal emotional expression.

1991: Charles Saatchi funds Damien Hirst and the next year in the Saatchi Gallery exhibits his The Physical Impossibility of Death in the Mind of Someone Living, a shark in formaldehyde in a vitrine.

1993: Vanessa Beecroft holds her first performance in Milan, Italy, using young girls to act as a second audience to the display of her diary of food.

1999: Tracey Emin is nominated for the Turner Prize. Part of her exhibit is My Bed, her dishevelled bed, surrounded by detritus such as condoms, blood-stained knickers, bottles and her bedroom slippers.

2001: Martin Creed wins the Turner Prize for The Lights Going On and Off, an empty room where the lights go on and off.[4]

2002: Miltos Manetas confronts the Whitney Biennial with his Whitneybiennial.com.[5]

2005: Simon Starling wins the Turner Prize for Shedboatshed, a wooden shed which he had turned into a boat, floated down the Rhine and turned back into a shed again.[6]

Controversy in the UK 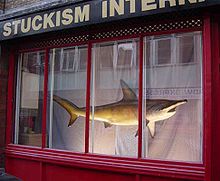 The Stuckist group of artists, founded in 1999, proclaimed themselves "pro-contemporary figurative painting with ideas and anti-conceptual art, mainly because of its lack of concepts." They also called it pretentious, "unremarkable and boring" and on July 25, 2002, in a demonstration, deposited a coffin outside the White Cube gallery, marked "The Death of Conceptual Art".[7][8] In 2003, the Stuckism International Gallery exhibited a preserved shark under the title A Dead Shark Isn't Art, clearly referencing the Damien Hirst work (see disputes above).[9]

In 2002, Ivan Massow, the Chairman of the Institute of Contemporary Arts branded conceptual art "pretentious, self-indulgent, craftless tat" and in "danger of disappearing up its own arse ... led by cultural tsars such as the Tate's Sir Nicholas Serota.[10] Massow was consequently forced to resign. At the end of the year, the Culture Minister, Kim Howells (an art school graduate) denounced the Turner Prize as "cold, mechanical, conceptual bullshit".[11]

In October 2004, the Saatchi Gallery told the media that "painting continues to be the most relevant and vital way that artists choose to communicate."[12] Following this Charles Saatchi began to sell prominent works from his YBA collection.

Computer games date back as far as 1947, although they did not reach much of an audience until the 1970s. It would be difficult and odd to deny that computer and video games include many kinds of art (bearing in mind, of course, that the concept "art" itself is, as indicated, open to a variety of definitions). The graphics of a video game constitute digital art, graphic art, and probably video art; the music of a video game clearly constitutes electronic music. However it is a point of debate whether the video game as a whole should be considered a piece of art of some kind, perhaps a form of interactive art.

Film critic Roger Ebert, for example, has gone on record claiming that video games are not art, and for structural reasons will always be inferior to cinema, but then, he admits his lack of knowledge in the area when he affirmed that he "will never play a game when there is a good book to be read or a good movie to be watched." [13]. Video game designer Hideo Kojima has argued that playing a videogame is not art, but games do have artistic style and incorporate art.[14][15][16] Video game designer Chris Crawford argues that video games are art[17]. Esquire columnist Chuck Klosterman also argues that video games are art.[18]. Tadhg Kelly argues that play itself is not art and that fun is a constant required for all games [19] so the art in games is the art of location and place rather than interaction. [20]