Cortina d'Ampezzo (Ladin: Anpëz, German: Hayden) is a town and comune in the southern (Dolomitic) Alps located in Veneto, a region in Northern Italy. Located in the heart of the Dolomites in an alpine valley, it is a popular winter sport resort known for its ski-ranges, scenery, accommodations, shops and après-ski scene. After the scheduled 1944 Olympics had been cancelled because of WWII, it hosted the 1956 Winter Olympics as well as various world cup events and motion pictures. Much of 1963 classic The Pink Panther, the progenitor of the series, was filmed in Cortina. One of the memorable James Bond stunt sequences in 1981's For Your Eyes Only, gunners on spike-wheeled motorcycles chasing Roger Moore on skis, was filmed on its slopes, as were several scenes in the film Cliffhanger. 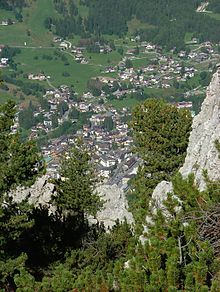 View down into Cortina from Monte Faloria.

Cortina is situated at the top of the Valle del Boite in the Dolomites, and is positioned between Cadore (to the south) and the Val Pusteria (to north), Val d' Ansiei (to east) and Agordo (to the west). It is encircled 360° by the Dolomites. Among the more famous mountains are Tofane to the west, Pomagagnon to the north, Cristallo to the northeast, Faloria and Sorapiss to the east, and Becco di Mezzodì, Croda da Lago and Cinque Torri to south. The city centre is located at an altitude of 1,224 m (4,015.75 ft), although the highest summit is that of the Tofana di Mezzo, which towers at 3,244 m (10,643.04 ft). There is a significant water presence in the territory, in the form of torrents, streams and little lakes (Ghedina, Pianozes, d'Ajal...), which fill particularly during the summer snow-melt season. Fauna include marmots, roe deers, chamoises and hares.

In the Middle Ages, Ampezzo fell under the jurisdiction of the Patriarchate of Aquileia, and of the Holy Roman Empire. In 1420, the village was conquered by the Republic of Venice. In 1508 it was conquered by Austria, and by 1511 people of Ampezzo swore loyalty to the Emperor Maximilian. Although remaining a Habsburg's possession until 1920, aside from being home for an ethnic German-speaking minority, Ampezzo never became a German-speaking territory and conserved its original language, Ladin, a Rhaeto-Romance language.

When Italy entered the World War in 1915, most of the male inhabitants were fighting for Austria on the Russian front. Six hundred sixty-nine (669) male inhabitants (most of them under 16 or over 50) tried to fight the Italian troops. Outnumbered by the Italians, they had to retreat. After the Austrian recovery in 1917, the town was occupied again by the Tyrolian Standschützen. Following Italy's victory in World War I, Ampezzo was finally given to Italy.

After the war the city was renamed "Cortina d'Ampezzo" (Graveyard of Ampezzo), adopting the name of one of the six villages that made up the territory of Ampezzo, located in the middle of the Ampezzo valley.

Already an elite destination for the first British tourists in the late 18th century and early twentieth, Cortina d'Ampezzo became a favourite resort for upper-class Italians as well after World War I. After the winter Olympics were held there in 1956, Cortina became a world-renowned resort, experiencing increased mass tourism.

Cortina is situated more or less to the centre of the Ampezzana valley, encircled nearly completely by the high Dolomites. Originally it was composed of numerous frazioni, isolated villages and hamlets, but with the advent of the tourism from the 1950s it grew rapidly . Only the furthest villages and hamlets in the commune have remained secluded and isolated from the main town, which today is known for its shopping. Cortina is home to some of the most prestigious names in fashion, including Bulgari, Benetton, Gucci and Geox, and various artisan shops, antiquarians, and craft stores. It is also home to many stores which specialize in mountaineering equipment. 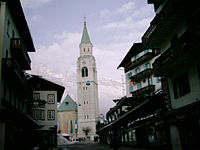 However, the symbol of Cortinese shopping remains La Cooperativa di Cortina, founded on June 28, 1893 under the name of Consumverein Ampezzo. In this shopping centre many trades can be found, from confectioners to newspaper vendors, toys, gift shops, skiing stores and blacksmiths. The building is divided into three levels (more a raised plan and a balcony). The cooperative in Cortina was one of the first cooperatives founded in the Italian Peninsula, and currently provides employment to approximately 200 people. Near the bridge on the Bigontina River is the Town Hall, a palace in the Tirolese style.

Piazza Venezia houses several popular spots. The Ciasa de ra Regoles is one of the more important legal buildings in Cortina, where the "regolieri" — a council for the local villages that stood before the town merged — trained the community and gave administrative orders. In the same building today is also found the office of the Scuola Sci Cortina, Cortina's skiing school. 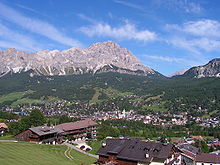 The Ampezzano climate is typically alpine, with short summers, and long winters that vacillate between frigid, snowy, unsettled, and temperate. Between the end of December and first of January of every year, some of the lowest temperatures recorded in Italy are in this region, particularly in heights of the Cimabanche Steppe, the area on the border between the provinces of Belluno and Bolzano. The average seasons are generally rainy, cold, and very windy.

The city is home to SG Cortina, a professional ice hockey team currently playing in the country's top division, Serie A1.

Cortina was the home of Olympic bobsledder Eugenio Monti, who was the first winner of the de Coubertin medal for fair play. 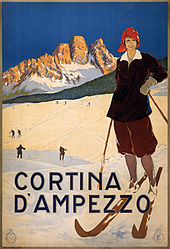 The surroundings of Cortina have been the location for a number of movies, including mountain climbing scenes for Cliffhanger, Krull and The Pink Panther. The resort was a major location for the James Bond 007 film For Your Eyes Only, including action sequences set against a backdrop of various winter sports and one of the most famous ski chase sequences in film, where Roger Moore as Bond has to escape a crew of assassins on spike-wheeled motorcycles, his route taking them all onto the bobsleigh run. The actual town centre was the scene of the first attack on Bond and his partner Melina Havelock (Carole Bouquet) by two motorcyclists who attempted to run them over, only for Bond to eliminate them both. [1]

Audrey Hepburn was a frequent visitor to the slopes of Cortina.

The town voted in October 2007 to secede from the region of Veneto and join the neighboring region, Trentino-Alto Adige/Südtirol. Cited motivations include cultural ties with the small Ladin-speaking community in South Tyrol and a desire for lower taxes. The referendum is not executive and a final decision on the matter can only be taken by law of the Italian parliament with consent of both regional councils of Veneto and Trentino-Alto Adige. [1][2][3]

Cortina is twinned with: