Functionalism, in architecture, is the principle that architects should design a building based on the purpose of that building. This statement is less self-evident than it first appears, and is a matter of confusion and controversy within the profession, particularly in regard to modern architecture.

The place of functionalism in building can be traced back to the Vitruvian triad, where 'utilitas' (variously translated as 'commodity', 'convenience', or 'utility') stands alongside 'venustas' (beauty) and 'firmitas' (firmness) as one of three classic goals of architecture. Functionalist views were typical of some gothic revival architects, in particular Augustus Welby Pugin wrote that "there should be no features about a building which are not necessary for convenience, construction, or propriety" and "all ornament should consist of enrichment of the essential construction of the building".[1]

The debate about functionalism and aesthetics is often framed as a mutually exclusive choice, when in fact there are architects, like Will Bruder, James Polshek and Ken Yeang, who attempt to satisfy all three Vitruvian goals.[citation needed]

In the early years of the 20th century, Chicago architect Louis Sullivan popularized the phrase 'form ever follows function' to capture his belief that a building's size, massing, spatial grammar and other characteristics should be driven solely by the function of the building. The implication is that if the functional aspects are satisfied, architectural beauty would naturally and necessarily follow.

Sullivan's credo is often viewed as being ironic in light of his extensive use of intricate ornament, since a common belief among functionalist architects is that ornament serves no function. The credo also does not address whose function he means. The architect of an apartment building, for instance, can easily be at cross-purposes with the owners of the building regarding how the building should look and feel, and they could both be at cross-purposes with the future tenants. Nevertheless 'form follows function' expresses a significant and enduring idea. Sullivan's protege Frank Lloyd Wright is also cited as an exemplar of functional design.

In the mid-1930s, functionalism began to be discussed as an aesthetic approach rather than a matter of design integrity. The idea of functionalism was conflated with lack of ornamentation, which is a different matter. It became a pejorative term associated with the most bald and brutal ways to cover space, like cheap commercial buildings and sheds, then finally used, for example in academic criticism of Buckminster Fuller's geodesic domes, simply as a synonym for 'gauche'.

For 70 years the preeminent and influential American architect Philip Johnson held that the profession has no functional responsibility whatsoever, and this is one of the many views today. Johnson said, "Where form comes from I don’t know, but it has nothing at all to do with the functional or sociological aspects of our architecture".[2] The position of postmodern architect Peter Eisenman is based on a user-hostile theoretical basis and even more extreme: "I don't do function."[citation needed] The best-known architects in the west, like Frank Gehry, Steven Holl, Richard Meier and I.M. Pei, see themselves primarily as artists, with some secondary responsibility to make their buildings functional for clients and/or users.[citation needed].

The roots of modern architecture lie in the work of the Franco-Swiss architect Le Corbusier and the German architect Mies van der Rohe. Both were functionalists at least to the extent that their buildings were radical simplifications of previous styles. In 1923 Mies van der Rohe was working in Weimar Germany, and had begun his career of producing radically simplified, lovingly detailed structures that achieved Sullivan's goal of inherent architectural beauty. Le Corbusier famously said "a house is a machine for living in"; his 1923 book Vers une architecture was, and still is, very influential, and his early built work such as the Villa Savoye in Poissy, France, is thought of as prototypically functional. 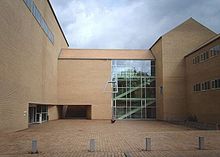 The term Danish Functionalism is sometimes used to describe the Danish branch of functionalistic architecture which had its heyday in the 1960s.

Danish Functionalists focused primarily on functionality at the expense of aesthetics and produced a number of buildings that are characterized by straight angles, flat roofs, and a kind of roughness provided by the minimally decorated concrete slabs that the buildings themselves are made of. A fine example of the Danish Functionalist style is Aarhus University designed by the architect C.F. Møller. Danish architects such as Kaare Klint and Arne Jacobsen extended their approach to the furniture now known as Danish modern.[3]

The residential area of Södra Ängby in western Stockholm, Sweden, blended a functionalist or international style with garden city ideals. Encompassing more than 500 buildings, it remains the largest coherent functionalistic villa area in Sweden and possibly the world, still well-preserved more than a half-century after its construction 1933–40 and protected as a national cultural heritage.[4]

The development of functionalism in landscape architecture paralleled its development in building architecture. At the residential scale, designers like Christopher Tunnard, James Rose, and Garrett Eckbo advocated a design philosophy based on the creation of spaces for outdoor living and the integration of house and garden.[5] At a larger scale, the German landscape architect and planner Leberecht Migge advocated the use of edible gardens in social housing projects as a way to counteract hunger and increase self-sufficiency of families. At a larger scale, the Congrès International d'Architecture Moderne advocated for urban design strategies based on human proportions and in support of four functions of human settlement: housing, work, play, and transport.