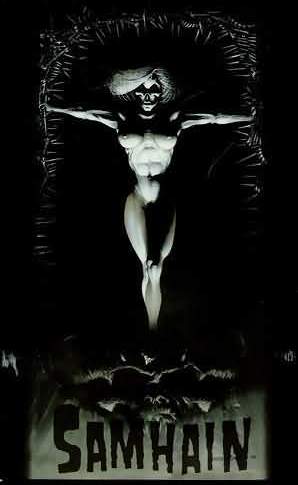 The Samhain Box Set was released in 2000, more than 13 years after Samhain effectively ceased recording and performing. The set's five CDs and one VHS tape compile nearly all of the band's original catalogue, newly remastered for the original mastertapes, and a wealth of previously unreleased material, the latter of which includes a live CD and a VHS video cassette of live footage.

Of Samhain's previous official releases, only the original mix of the was not included in the Box Set; conjecture is that the original master tapes had been lost over the years, or were erased when Danzig re-recorded the guitar and some vocal tracks to those songs in June 1987.

The Box Set initially retailed at around $60.00 USD, and is now out of print. If pre-ordered online through distributor E-Magine Music's website, the first pressing of the Box Set was shipped two weeks prior to the street date, and was packaged with a bonus metal pin of the "scarecrow beast" character that appeared on Samhain T-shirts in the 1980s (similar to the one on the cover of the album). In all pressings, each of the five CDs came in its own "mini-LP" sleeve within the box, but when they were re-released individually the following year, these sleeves were replaced with normal CD jewel-cases.

Also included in the Box Set was a comic book by Mr. Monster creator and a 32-page booklet of photographs and the lyrics to Discs One and Three. The outer box cover was painted by the late , who had done artwork for several other products from singer 's post-Samhain band, Danzig.