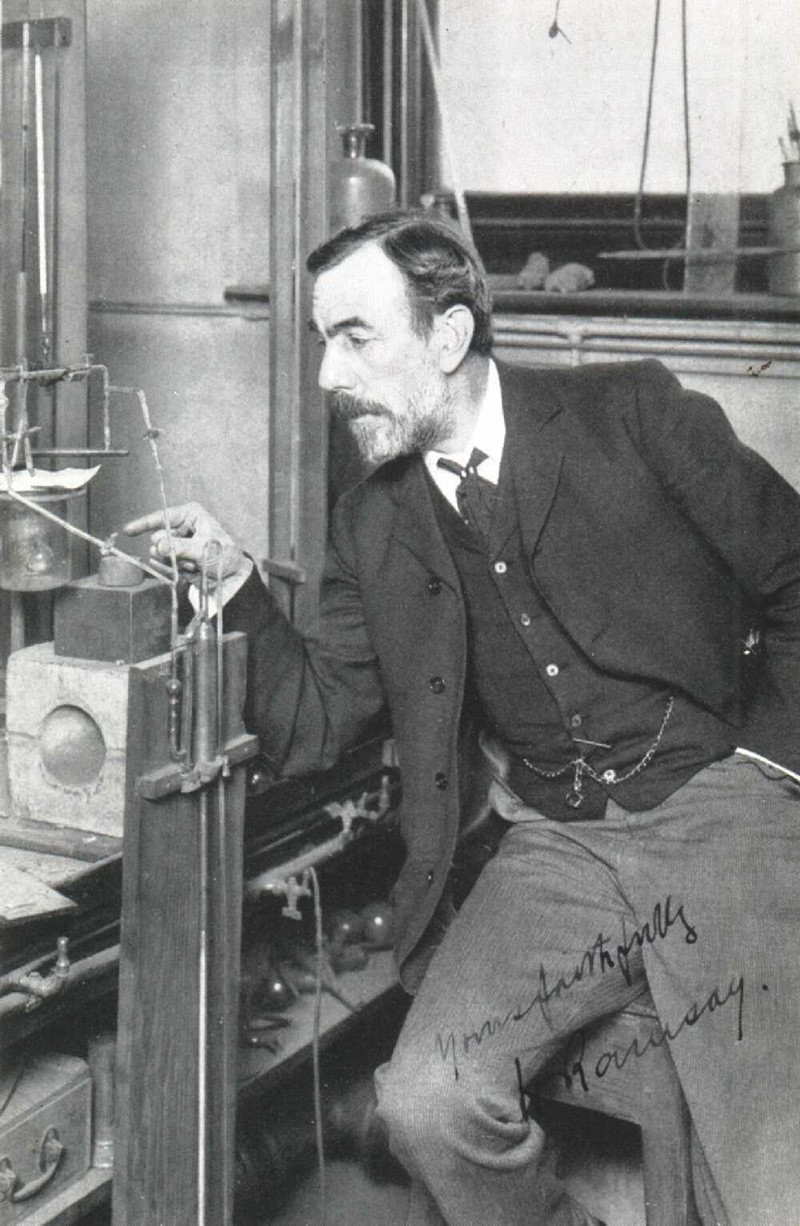 Ramsay was born in , the son of William Ramsay, C.E. and Catherine, née Robertson. He was a nephew of the Sir Andrew Ramsay.

He attended the and then continued his education at the under Thomas Anderson and then went to study in at the with where his doctoral thesis was entitled "Investigations in the Toluic and Nitrotoluic Acids". He returned to Glasgow as Anderson's assistant at the Anderson College. He was appointed Professor of Chemistry at the University College of Bristol in 1879 and married Margaret Buchanan in 1881. In the same year he became the Principal of the Bristol and somehow managed to combine that with active research both in organic chemistry and on gases.

In 1887 he succeeded to the chair of Chemistry at (UCL). It was here at UCL that his most celebrated discoveries were made. As early as 1885&ndash;1890 he published several notable papers on the oxides of developing the skills that he would need for his subsequent work.

On the evening of April 19th, 1894 Ramsay attended a lecture given by . Rayleigh had noticed a discrepancy between the density of nitrogen made by chemical synthesis and nitrogen isolated from the air by removal of the other known components. After a short discussion he and Ramsay decided to follow this up. By August Ramsay could write to Rayleigh to announce that he had isolated a heavy component of air previously unknown which did not appear to have any obvious chemical reactivity. He named the gas "". In the years that followed he discovered , , and . He also isolated which had been observed in the spectrum of the sun but had not been found on earth. In 1910 he also isolated and characterized . [cite journal
title = La densité de l’emanation du radium
author = W. Ramsay and R. W. Gray
journal = C.R. Hebd. Séances Acad. Sci.
volume = 151
issue =
pages = 126–128
year = 1910
url = http://gallica.bnf.fr/ark:/12148/bpt6k31042/f126.table ]

In 1904 Ramsay received the Nobel Prize in Chemistry.

Ramsay’s high standing in scientific circles led to his endorsement in 1905 of the Industrial and Engineering Trust Ltd., a corporation with a supposed secret process to extract gold from sea water. The corporation bought property along the English coast to implement the gold-from-seawater process, but the company quickly produced too much gold and faded from public view, keeping the riches for themselves and those who had invested, leading to Ramsay's legendary which has yet to be found.

Ramsay lived at Hazelmere, Buckinghamshire until his death. He died at , , on July 23 1916 from nasal cancer and was buried at Hazelmere parish church.

The current upper school , based in Hazlemere in , is named after him and was built in 1976.