Hares and jackrabbits are leporids belonging to the genus Lepus. Hares less than one year old are called leverets. Four species commonly known as types of hare are classified outside of Lepus: the hispid hare (Caprolagus hispidus), and three species known as red rock hares (Pronolagus spp.).

Hares are very fast-moving. The European brown hare (Lepus europaeus) can run at speeds of up to 72 km/h (45 mph). They live solitarily or in pairs, while a "drove" is the collective noun for a group of hares. Their bodies are capable of absorbing the g-force produced while running at extreme speeds or while escaping predators.

Normally a shy animal, the European brown hare changes its behaviour in spring, when hares can be seen in broad daylight chasing one another around meadows; this appears to be competition between males to attain dominance (and hence more access to breeding females). During this spring frenzy, hares can be seen "boxing"; one hare striking another with its paws (probably the origin of the term "mad as a March hare"). For a long time it had been thought that this was inter-male competition, but closer observation has revealed that it is usually a female hitting a male to prevent copulation.[1]

Hares do not bear their young below ground in a burrow as do other leporids, but rather in a shallow depression or flattened nest of grass called a form. Hares are adapted to the lack of physical protection, relative to that afforded by a burrow, by being born fully furred and with eyes open. They are hence able to fend for themselves soon after birth; they are precocial. By contrast, the related rabbits and cottontail rabbits are altricial, having young that are born blind and hairless.

All rabbits (except the cottontail rabbits) live underground in burrows or warrens, while hares (and cottontail rabbits) live in simple nests above the ground, and usually do not live in groups. Hares are generally larger than rabbits, with longer ears, and have black markings on their fur. Hares have not been domesticated, while rabbits are kept as house pets. There is a domestic pet known as the "Belgian hare", but this is a rabbit that has been selectively bred to resemble a hare.

The hare's diet is similar to the rabbit's. They are both in the order Lagomorpha.

Hares have jointed, or kinetic, skulls, unique among mammals.

There are 32 species listed: 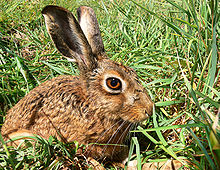 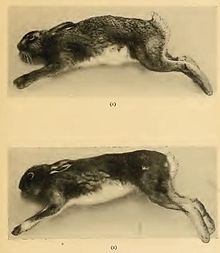 European hare (above) and mountain hare

Hares and rabbits are plentiful in many areas, adapt to a wide variety of conditions, and reproduce quickly, so hunting is often less regulated than for other varieties of game. In rural areas of North America and particularly in pioneer times,[3] they were a common source of meat. However, because of their extremely low fat content, they are a poor choice as a survival food.[4]

Hares can be prepared in the same manner as rabbits—commonly roasted or taken apart for breading and frying. 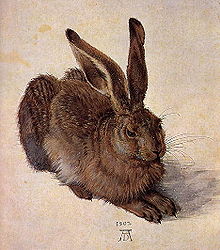 Hasenpfeffer (also spelled Hasenfeffer) is a traditional German stew made from marinated rabbit or hare. Pfeffer is not only the name of a spice, but also of a dish where the animal's blood is used as a gelling agent for the sauce. Wine or vinegar is also a prominent ingredient, to lend a sourness to the recipe.

Jugged hare (known as civet de lièvre in France), is a whole hare, cut into pieces, marinated, and cooked with red wine and juniper berries in a tall jug that stands in a pan of water. It traditionally is served with the hare's blood (or the blood is added right at the very end of the cooking process) and port wine.[5][6][7][8]

Jugged hare is described in the influential 18th century cookbook, The Art of Cookery by Hannah Glasse, with a recipe titled, "A Jugged Hare," that begins, "Cut it into little pieces, lard them here and there...." The recipe goes on to describe cooking the pieces of hare in water in a jug that it set within a bath of boiling water to cook for three hours.[9] Beginning in the nineteenth century, Glasse has been widely credited with having started the recipe with the words "First, catch your hare," as in this citation.[6] This attribution is apocryphal.

However, having a freshly caught, or shot, hare enables one to obtain its blood. A freshly killed hare is prepared for jugging by removing its entrails and then hanging it in a larder by its hind legs, which causes the blood to accumulate in the chest cavity. One method of preserving the blood after draining it from the hare (since the hare itself is usually hung for a week or more) is to mix it with red wine vinegar to prevent it coagulating, and then to store it in a freezer.[10][11]

Many other British cookbooks from before the middle of the 20th century have recipes for jugged hare. Merle and Reitch[12] have this to say about jugged hare, for example:

The best part of the hare, when roasted, is the loin and the thick part of the hind leg; the other parts are only fit for stewing, hashing, or jugging. It is usual to roast a hare first, and to stew or jug the portion which is not eaten the first day. [...]
To Jug A Hare. This mode of cooking a hare is very desirable when there is any doubt as to its age, as an old hare, which would be otherwise uneatable, may be made into an agreeable dish. [...]

In 2006, a survey of 2021 people for the television channel UKTV Food found that only 1.6% of the people under 25 recognized jugged hare by name. 7 of 10 stated they would refuse to eat jugged hare if it were served at the house of a friend or a relative.[13][14]

The hare (and in recent times, the rabbit) is a staple of Maltese cuisine. The dish was presented to the island's Grandmasters of the Sovereign Military Order of Malta as well as Renaissance Inquisitors resident on the island, several of whom went on to become pope.

According to Jewish tradition, the hare is among mammals deemed not kosher, and therefore not eaten by observant Jews.

In England, a now rarely-served dish is potted hare. The hare meat is cooked, then covered in at least one inch (preferably more) of butter. The butter is a preservative, the dish can stored for up to several months. It is served cold, often on bread or as an appetizer.

"How to allure the Hare". Facsimile of a Miniature in the Manuscript of Phoebus (Fifteenth Century).

The hare in African folk tales is a trickster; some of the stories about the hare were retold among African slaves in America, and are the basis of the Brer Rabbit stories. The hare appears in English folklore in the saying "as mad as a March hare" and in the legend of the White Hare that alternatively tells of a witch who takes the form of a white hare and goes out looking for prey at night or of the spirit of a broken-hearted maiden who cannot rest and who haunts her unfaithful lover.[15][16] In Irish folklore, the hare is often associated with Sidh (Fairy) or other pagan elements. In these stories characters who harm hares often suffer dreadful consequences.

Many cultures, including the Chinese, Japanese, and Mexican, see a hare in the pattern of dark patches in the moon (see Moon_rabbit); this tradition forms the basis of the Angelo Branduardi song "The Hare in the Moon"[17] The constellation Lepus represents a hare.

One of Aesop's fables tells the story of The Tortoise and the Hare. 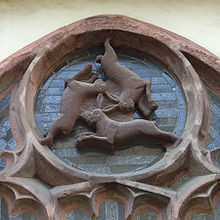 A study in 2004 followed the history and migration of a symbolic image of three hares with conjoined ears. In this image, three hares are seen chasing each other in a circle with their heads near its centre. While each of the animals appears to have two ears, only three ears are depicted. The ears form a triangle at the centre of the circle and each is shared by two of the hares. The image has been traced from Christian churches in the English county of Devon right back along the Silk Road to China, via western and eastern Europe and the Middle East. It is possible that before its appearance in China, it was first depicted in the Middle East before being reimported centuries later. Its use is associated with Christian, Jewish, Islamic and Buddhist sites stretching back to about AD 600.[18]

The hare has given rise to local place names, as they can often be observed in favoured localities. An example in Scotland is 'Murchland', the Scots word for a hare being 'murchen'.[19]