In the U.S. state of California, Interstate 15 (I-15) is a major north–south route through the San Bernardino, Riverside, and San Diego Counties, and it has a length of 287.26 miles (462.30 km) in the state. It is a major thoroughfare for traffic between Southern California and Las Vegas, Nevada, as well as points beyond. It is also the main route for traffic between San Diego and the Inland Empire.

Interstate 15 is part of the California Freeway and Expressway System,[2] and it is eligible for designation as a state highway within the State Scenic Highway System;[3] however the state transportation authority, Caltrans, has not done so.[4] There are various local names for the highway. I-15 between SR 163 and Pomerado Road/Miramar Road is known as the Semper Fi Highway in recognition of the nearby Marine Corps Air Station Miramar.[5] North of the Escondido city limits it is known as the Avocado Highway, whose designation ends upon entering Temecula. There are other local names as noted below.

Heading northward, I-15 currently begins at Interstate 8, at the same place that its continuation, State Route 15, begins its southward journey. I-15 goes through Mission Valley and intersects with State Route 52, before merging with State Route 163. After traversing the Marine Corps Air Station Miramar, I-15 comes into Rancho Penasquitos, where it intersects with the end of State Route 56. Northward, the route crosses Lake Hodges inside the upper San Diego city limits. There are high-occupancy toll lanes in the center of I-15 from State Route 163 to Centre City Parkway, north of Via Rancho Parkway, in Escondido.[6]

I-15 continues north into Escondido, where it interchanges with State Route 78. North of Escondido, I-15 goes through hilly terrain and farmland, intersecting State Route 76 (SR 79), before it crosses the county line into Riverside County. In Riverside County, SR 79 runs concurrently with I-15 for a four-mile (6 km) portion in Temecula, before it splits away running north to Hemet. Then, I-15 intersects with the southern end of Interstate 215, which continues the designation of the Escondido Freeway. Interstate 15 continues north as the Temecula Valley Freeway.[7]

In Murrieta, I-15 splits from its first and only spur route in California, Interstate 215, which runs through the two largest cities in the Inland Empire, San Bernardino and Riverside. I-15 runs along the eastern edge of the Santa Ana Mountains, passing the town of Lake Elsinore. It continues through the suburban areas in the western Inland Empire, passing Corona and Ontario, California. The highway is then rejoined by I-215, before heading northwards and upward through the Cajon Pass, an important mountain pass that is the primary route between Southern California and points eastwards and northeastwards.

The portion of I-15 that is located between its northern and southern junctions with I-215 is also used by many local residents as the major north–south route for the western portions of the San Bernardino-Riverside-Ontario metropolitan area. (I-215 serves a similar function in the eastern portion of the metropolitan area. These two highways are the only continuous north–south freeways in the area.)

North of Limonite Avenue (south of SR 60), I-15 is known as the Ontario Freeway. I-15 intersects State Route 60, Interstate 10, and State Route 210 in rapid succession as it goes through Mira Loma, Ontario, and Rancho Cucamonga. As it nears Devore, I-15 merges with Interstate 215, where it is called the Barstow Freeway or the Mojave Freeway. 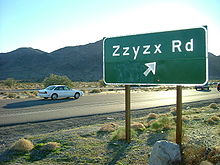 North of the Cajon Pass, I-15 traverses the Mojave Desert towns of Hesperia and Victorville. I-15 passes through desert for 30 miles (48 km) before reaching Barstow, then continues past Zzyzx Road, before reaching the town of Baker. The sign for Zzyzx Road — alphabetically the last place name in the world — is a landmark of sorts on the drive between Los Angeles and Las Vegas. I-15 enters Nevada near the casino town of Primm, formerly known as Stateline, Nevada.

Westbound coming down into Shadow Valley. Halloran Summit is on the skyline, about 8 miles (13 km) away.

I-15 continues thereafter to Las Vegas, Salt Lake City, and on into Idaho and Montana, before ending at the Canadian border, where Alberta Highway 4 continues the ribbon of asphalt into Canada. Because it joins with the western end of I-70 in Southwestern Utah, I-15 also forms part of a major east–west corridor connecting Southern California with Denver, St. Louis, and points east.

The Mojave Freeway is fairly busy on weekdays, since it connects the rapidly growing exurbs of the Victor Valley with the Los Angeles area. On weekends and holidays, however, it can sometimes be jammed with Californians driving to Las Vegas for short vacations.[8]

Construction is currently underway to rehabilitate the pavement on I-15 and to add truck lanes to separate autos from truck traffic.[citation needed]

I-15 was initially planned to run from I-10 in San Bernardino along the current I-215 alignment then up through the Cajon Pass and on to Las Vegas, with a distance of 186.24 miles (299.72 km) within the state. California successfully argued the addition south to San Diego, suggesting that the freeway would connect the major military bases former March AFB and former NAS (now MCAS) Miramar. US 395 was then signed TEMP-15 and the "old" I-15 between Devore and San Bernardino became I-215.

On January 24, 1957, the State Highway Commission defined the Escondido Freeway as what are now Routes 15 and 215 from Route 805 to Route 91. This entire segment was previously U.S. Route-395 when it was named. Since then, the definition was extended on Route 15 south to Route 8 by Assembly Concurrent Resolution 34, Chapter 67 in 1979.[9] Meanwhile, the segment of Route 15 from the San Diego County Line to the I-15/I-215 interchange was named the Temecula Valley Freeway in 1990.[10]

This legal definition has been amended twice: First in 1990, the California Assembly passed Concurrent Resolution 125, Chapter 78, renaming I-15 between the San Diego County Line (which is further south from Interstate 215) and Bundy Canyon Road near Lake Elsinore as the Temecula Valley Freeway.[12]

Then in 1993, the California Assembly passed legislation officially designating State Route 71 as a part of the Chino Valley Freeway.[13] However, the name "Corona Freeway" is, confusingly, sometimes still applied to this portion of State Route 71; despite the change, guide signs on
eastbound and SR 57 southbound at the Kellogg Interchange in Pomona still refer to SR 71 as the "Corona Freeway".

In the 1964 renumbering, the route was assigned as State Route 31. It was added to the Interstate Highway System in February 1972 as a realignment of Interstate 15 (the former alignment became Interstate 15E).[17] Legislative changes were made in 1974, eliminating SR 31 (along with State Route 71 south of Corona) in favor of I-15.[18] However, SR 31 continued to be signed — as temporary Interstate 15 - until present I-15 was finished. (A 1986 map shows state maintenance continuing north past SR 60 to Jurupa Street, where it turned east to I-15.[19])

California State Route 15 from Interstate 5 to Interstate 8 in San Diego will be re-designated as part of I-15 once this segment is completely upgraded to Interstate standards.

Most of Interstate 15 is undergoing major improvements from Devore to the Nevada State Line, beginning in 2002 and costing $349 million. This project will improve traffic flow on the heavily traveled highway for those going to and from Las Vegas. Most of the construction was completed by Winter 2009.[20] Projects include adding truck lanes on hills (39 miles or 63 kilometres at various locations), repaving 76 miles (122 km) of I-15 at various locations, adding exit numbers, renovating and rehabilitating the rest area between Baker and the Nevada State Line (Valley Wells Rest Area), reconstructing bridges in Baker, and moving the agriculture inspection station from Yermo to the Nevada State Line and including a truck weigh station.

As of March 2008, construction is underway to add a northbound truck descending lane and to repave lanes between Bailey Rd. and Yates Well Rd.

There is also construction ongoing (circa spring 2008) to expand traffic lanes in northern San Diego County, including the northward extension (beyond SR 56) of the existing high-occupancy toll lanes which already exist between SR 56 and SR 163. It appears that this extension will move the northern terminus of the HOV lanes to a location at or near the interchange with SR 78.