The Pico de Orizaba, or Citlaltépetl (from Nahuatl citlal(in) = star, and tepētl = mountain), is a stratovolcano, the highest mountain in Mexico and the third highest in North America. It rises 5,636 metres (18,491 ft) above sea level in the eastern end of the Trans-Mexican Volcanic Belt, on the border between the states of Veracruz and Puebla. The volcano is currently dormant but not extinct with the last eruption taking place during the 19th century. It is the second most prominent volcanic peak in the world after Africa's Mount Kilimanjaro.

The Pico overlooks the valley and city of Orizaba, from which it gets its name. The name Citlaltépetl is not used by Nahuatl speakers of the Orizaba area, who instead call it Istaktepetl (Iztactépetl in the traditional orthography for Classical Nahuatl) 'White Mountain'. The earliest mention of the volcano was referred to by the natives during the Pre-Columbian Era as Poyautécatl which means, "The ground that reaches the clouds".

Citlaltépetl was the common name in the Náhuatl language when the Spanish arrived in Mexico. Citlaltépetl comes from the Náhuatl citialli (star) and tepētl (mountain) meaning "star mountain". Star mountain is thought to refer to the snow covered peak that can be seen year round for hundreds of kilometers around the region. A legend arises from the city of Coscomatepec which tells the story of how the planet Venus can be seen settling into the crater of Citlaltépetl. During the colonial era, the volcano was also known as Cerro de San Andrés due to the close settlement of San Andrés Chalchicomula located at the base.

The peak of Citlaltépetl rises dramatically from the shores of the Gulf of Mexico to an elevation of 5,636 m (18,491 ft) above sea level; it has a topographic prominence of 4,922 m (16,148 ft). Regionally dominant, Pico de Orizaba is the highest peak in Mexico and the highest volcano in North America; it is also the third highest peak in North America after Mount McKinley and Mount Logan. Orizaba is ranked 7th in the world in topographic prominence. It is the second most prominent volcanic peak in the world after Africa's Mount Kilimanjaro. About 110 km (68 mi) to the west of the port of Veracruz, its peak is visible to ships approaching the port in the Gulf of Mexico, and at dawn rays of sunlight strike the Pico while Veracruz still lies in shadow. The volcano is also ranked 16th in the world for topographic isolation. 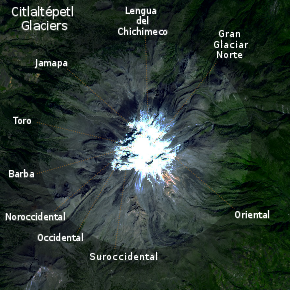 The main peaks and glaciers of Pico de Orizaba

Pico de Orizaba is one of only three volcanoes in México that continue to support glaciers and is home to the largest glacier in Mexico, Gran Glaciar Norte . Orizaba has nine known glaciers: Gran Glaciar Norte, Lengua del Chichimeco, Jamapa, Toro, Glaciar de la Barba, Noroccidental, Occidental, Suroccidental, and Oriental. The equilibrium line altitude (ELA) is not known for Orizaba. Snow on the south and southeast sides of the volcano melts quickly because of solar radiation, but colder temperatures on the northwest and north sides allow for glaciers. The insolation angle and wind redeposition on the northwest and north sides allow for constant accumulation of snow providing a source for the outlet glaciers. On the north side of Orizaba, the Gran Glaciar Norte fills the elongated highland basin and is the source for seven outlet glaciers. The main glacier extends 3.5 kilometres (2.2 mi) north of the crater rim, has a surface area of about 9.08 square kilometres (3.51 sq mi) descending from 5,650 metres (18,540 ft) to about 5,000 metres (16,000 ft). It has a slightly irregular and stepped profile that is caused in part by the configuration of the bedrock. Most crevasses show an ice thickness of approximately 50 metres (160 ft).[4] 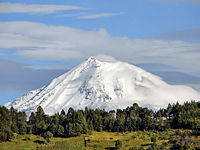 East of the summit cone, a separate steep niche glacier, Glaciar Oriental, 1.2 km (0.75 mi) long and having a gradient of 440 m km− 1 (83.3 ft/mi), flows down the mountainside from about 5,600 to 5,070 m (18,400 to 16,630 ft); it contains many crevasses and seracs and is the most difficult glacier to climb. Glacier Oriental had a surface area of about 420,000 m2 (4,500,000 sq ft) in 1958, which makes the total area of glaciers and firn field on Citlaltépetl about 9.5 km2 (3.7 sq mi). No earlier historical record of glacier tongue activity (advance or recession) is known for Citlaltépetl’s glaciers. Although the Gran Glaciar Norte ice cap is covered with snow, it is possible to see the seven outlet glaciers on the irregular west margin of the ice cap, especially Glaciar de Jamapa and Glaciar Occidental.[4] 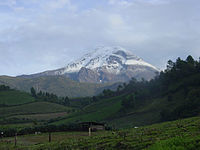 The climate of Pico de Orizaba, like the Sierra Madre Oriental, varies greatly due to the change of elevation and prevailing winds. Due to the latitude and the extreme rugged terrain the volcano experiences many microclimates. Vegetation varies from tropical at the lower elevations on the eastern face to alpine forests in the higher elevations.

Large amounts of precipitation fall on the eastern face of the volcano due to adiabatic cooling and condensation from the trade winds that bring moisture off the Gulf of Mexico. The eastern face is frequently covered by fog and low cloud cover. The climate of the eastern face varies from tropical (Af) at the lower elevations to subtropical highland (Cwb) at the higher elevations, with mild variation in temperatures and an average annual rainfall of 1,600 mm (63 in).

Subtropical climates are found between 2,200–3,200 m (7,200–10,500 ft) above sea level with a regular rainfall all year long. Autumn and winter come with frequent freezes and light snow, but the snow on the south and southeast sides melt quickly due to solar radiation. The northern face is dominated by subtropical highland (Cwb). The southern face mostly experiences humid subtropical climate Cfa which experiences the highest annual temperatures in the month of April.

Due to katabatic winds the western side is dominated by steppe (BSk) creating a rain shadow below 2,600 m (8,500 ft) above sea level. Although there are some areas on the western side that experience (Cfa) most of the area is semi-dry with temperate to warm temperatures and an annual precipitation average of 550 mm (22 in). Vegetation that is mainly observed here is grass and shrubs with few alpine species. 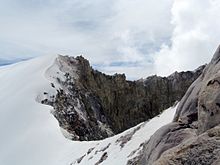 The volcano's crater is elliptical with a transverse diameter measuring 478 m (1,568 ft) and a conjugate diameter measuring 410 m (1,350 ft). The crater has an estimated 154,830 m2 (1,666,600 sq ft) with a maximum depth of 300 m (980 ft). Pico de Orizaba is constantly covered by an ice cap consisting of several glaciers. An outlet glacier, known as Jamapa Glacier is located on the northeastern side of the peak; it has been a powerful force in shaping the volcano. The Jamapa Glacier is responsible for a significant portion of the geomorphologic evolution of the region surrounding the volcano.[6]

Pico de Orizaba is located at 19°1′48″N 97°16′12″W at a distance of 100 kilometres (62 mi) from the shores of the Gulf of Mexico. Orizaba is located 200 kilometres (120 mi) miles east of Mexico City lies on the border between the states of Veracruz and Puebla. The volcano is approximately 480 kilometres (300 mi) south of the Tropic of Cancer. Orizaba is found at the southeastern end of the Trans-Mexican Volcanic Belt, a volcanic chain that runs from west to east across Central Mexico; it is the only historically active volcano in the area. A companion peak lying about six km to the southwest of the Pico de Orizaba is the Sierra Negra, at 4,640 metres (15,223 ft). This subsidiary peak is significantly lower than its massive neighbor, but is traversed by the highest road in North America passing over its summit.

Pico de Orizaba like the Sierra Madre Oriental forms a barrier between the coastal plains of the Gulf of Mexico and the Mexican Plateau. The volcano blocks the moisture from the Gulf of Mexico from saturating central Mexico and contributes to the climates of both areas. Both the state of Veracruz and Puebla depend on Pico de Orizaba for supplying fresh water. The largest river to be supplied by the Volcano is the Jamapa River. 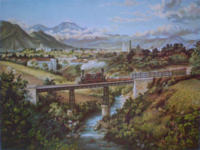 A painting of Pico de Orizaba from 1877 by Casimiro Castro.

Pico de Orizaba was important in pre-Hispanic cultures, such as those of the Nahuatl-speaking Aztecs and the Totonacs. The volcano is part of many native mythologies. In ancient Olmec mythology, Orizaba was an eagle spirit that formed the volcano. The Olmec believed that they were to hike and pray to the god at the zenith of the volcano on a continuous basis to prevent the god from getting upset and erupting in fury.

During the Spanish Conquest of Mexico, Hernán Cortés passed through the foothills of Pico de Orizaba; the volcano and the surrounding mountains made his journey to Tenochtitlan more difficult and delayed him for many days. During the 1600s, the Spanish Crown financed several roads to be built that would circumvent Citlaltépetl. One of the roads was routed south of the volcano through the cities of Orizaba and Fortín de las Flores, which became the main trade route between Mexico City and Veracruz on the Gulf Coast. A short road was later built by Jesuits to establish settlements at the base of Pico de Orizaba. The Spanish used the volcano as a landmark to guide themselves to the port of Veracruz. Many battles were fought near this volcano throughout Mexico's struggle for independence.

In 1839, Enrique Galeotti was the first European to explore the volcano, but did not hike to the summit. During the American occupation of Mexico in 1848, two American soldiers, F. Maynard and William F. Raynolds, were the first known hikers to reach the summit of Pico de Orizaba.[7] Later that year the French explorer, Alejandro Doignon also reached the summit. During the mid-19th century Citlaltépetl was explored by many scientists, of which the most famous was the German botanist, Hugo Fink; he was the first to record the numerous species of flora found on the volcano. In 1873, Martin Tritschler raised the Mexican flag at the summit.

On December 16, 1936, President Lázaro Cárdenas, in an effort to protect the natural beauty of Pico de Orizaba, created a national park with an area of 19,750 hectares (48,800 acres) which included the volcano with the surrounding area and the settlements of Tlachichuca, Ciudad Serdán, La Perla, Mariano Escobedo, and Calcahualco. The federal decree became federal law on January 4, 1937.

El Pico de Orizaba attracts large number of international climbers every year. There are many routes for approaching and climbing the volcano, and many people attempt it, mostly during the period from October to March. The most frequented route begins from the base camp Piedra Grande Hut via the Jamapa Glacier. Piedra Grande Hut Base Camp is located at an elevation of 4,270 m (14,010 ft) above sea level; it is a great place to stay or acclimatize to the high altitude.

Another option as a starting point is high camp located at the base of the glacier about 4,900 m (16,100 ft) above sea level. For a more technical challenge for the experienced climber, there is a technical ice climb called the Serpents Head which involves 10 pitches of grade 3 ice. Additionally, the southern side offers another challenging option; although the trail is shorter, it is steeper and more difficult. No glaciers are found on the southern side. The final ascent to the summit is via a normally straightforward and uncrevassed glacier route.