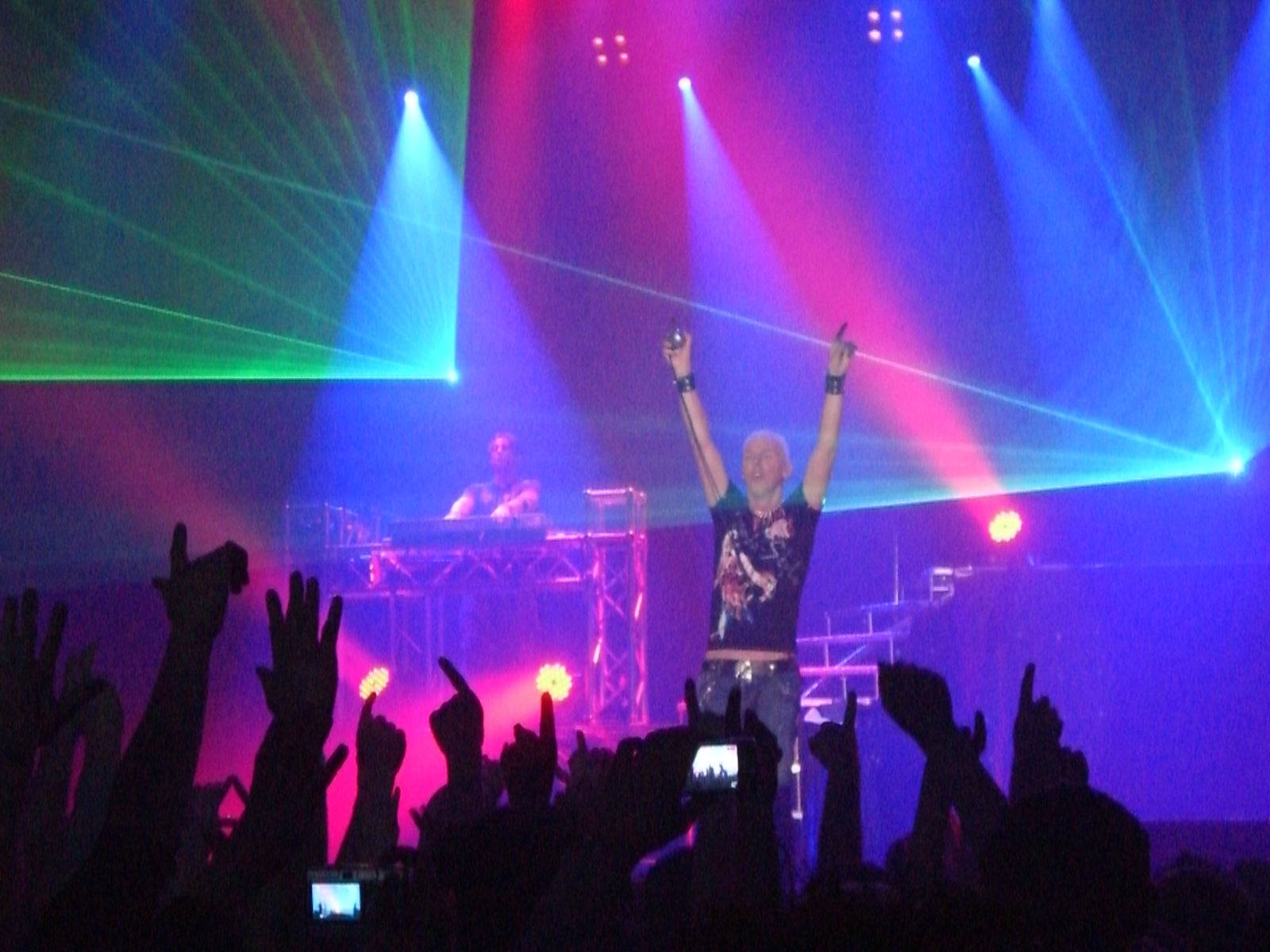 Img_capt = Scooter on their "Jumping all over the World" Tour, at the Zenith in Munich 2008
Img_size =
Landscape =
Background = group_or_band
Alias =
Origin = ,
Genre = Hardcore

Scooter are a German and band from

Their trademark sound features spoken or shouted vocals, pitch-shifted chorus vocals and live performance elements such as crowd samples. Among their more well-known hits are "", "", "Fire", "How Much Is the Fish?", "Posse (I Need You on the Floor)", "Ramp! (The Logical Song)", "Nessaja", "", "", "One (Always Hardcore)", "Hello! (Good to Be Back)" and "The Question Is What Is The Question?".

"Celebrate the Nun" and "The Loop"

In 1986 and met in , through a small ad and founded the new wave band . The band released two albums "Meanwhile" (1989) and "Continuous" (1991) and five singles. Initially, they started out as a quartet; however, Slin Tompson left the band in 1990 to start a project on his own. The main vocals were done by H.P. Baxxter whereas the female part of the vocals were delivered by Baxxter's sister Britt Maxime

The Beginning of Scooter

and Ferris Bueller (1996)] Scooter started as a project in 1994. Their debut single "Vallée De Larmes" (French for "Valley of Tears") reached #8 on the German official dance chart. In April of that year, Scooter played their first live show at "The Palladium" in Hamburg, where vocalist H.P. Baxxter began freestyling to an dance track, thus the melody "Hyper Hyper" being born. At that point, Scooter officially switched from being a project into a band, and Baxxter's "rapping" became one of the band's trademarks.

At first, "Hyper Hyper" was expected to be a small hit within the club scene only, which surprisingly enough became a platinum record selling 700,000 units

The band maintained the initial technique of their sound throughout their second album, "Our Happy Hardcore", until the style became noticeably different with their 1996 single "I'm Raving" (from the 3rd album "Wicked") as the tempos were down to 138 BPM from their previous tempos which were between the range of 160 and 190 BPM. However, this didn't seem to refrain their fans from buying their records as the single got its gold certification eventually reaching no. 4 in Germany.

A year later, Scooter became the first mainstream techno band to use a metal guitar riff in "Fire"

In 1998, Ferris Bueller (Soren Buehler) left the group to pursue a solo career, and was replaced by DJ Axel Coon, who had been working with the band at the recording studio for some time already. Thus, Scooter entered the second chapter and soon after released one of their memorable singles "How Much is the Fish?" which shot all the way to number 3, selling well over 300,000 units and becoming another gold single. Their fifth album, "No Time to Chill", which appeared in stores in , reached the number 4 position on Media Control album chart, which is considered the most successful album to date, both in and abroad.

The success kept on growing the secret of which H.P. Baxxter explains in his own words:

In July 1999, "Faster Harder Scooter", Scooter's first single from their sixth album, "Back to the Heavyweight Jam", reached number 7 at home, same position was also occupied by the album. In December of the same year, right after the release of the single "Fuck the Millennium", H. P. Baxxter announced that he would henceforth be called Sheffield Dave, Ice, Screaming Lord and Candyman in future.

Scooter released their seventh album, "Sheffield", in May 2000, which took yet another new direction including 6/8 rhythms on tracks "Don't Gimme the Funk" and "Sex Dwarf". In late 2000, after their second single "She's the Sun" (which portrayed the New Wave roots of both H.P.'s and Rick's), Scooter were awarded a Comet at the 2000 VIVA Comet Awards in the "Most Successful Dance Act" category.

The band's 21st single, "Posse (I Need You on the Floor)" (the video of which is shot at the Fredericia dance festival in ), happens to be the first song since "Endless Summer" to include a high-pitched-voice in the chorus. Their eighth album, "We Bring the Noise", released in , included another single, "Aiii Shot the DJ".

In December 2001, Scooter released their 23rd single "Ramp! (The Logical Song)" from the compilation album "Push The Beat For This Jam", the video of which is based on the film "The Fast and the Furious". The single shipped well over 200,000 units in Germany and went gold in many countries as well as platinum in , the and

In the beginning of 2002, the band released their second "Best Of" album titled "Push The Beat For This Jam (The Second Chapter)". It was at this time that Axel Coon left the band to pursue a solo career in DJing and remixing, and Jay Frog became the new third man during which time Scooter recorded three more albums.

As a quick way of introducing the new member Frog to their fans, the trio released a second compilation album in November 2002, calling it "24 Carat Gold". Their 24th single, "Nessaja" was a cover version of the title track from 's musical "Tabaluga", and made a sensational entry with their new line-up at number one on the German official single charts for the first time.

In February 2003, Scooter picked up the highest award in the German music industry for the single "Nessaja" at the Echo Awards 2003. In the same year, the video for "Weekend!" caused a real scandal with its scenes of topless dancers. The fans, however, didn't seem to be bothered by this debate, as the song reached number 2 on the German Media Control single chart.

Scooter released their next studio album, "The Stadium Techno Experience", in March 2003, which climbed to number 7 on the Media Control album chart. The single "The Night" became the last number to feature the high pitched voice effect and also reached the Top 10 in Germany. The next single from the album, "Maria (I Like It Loud)", was released in collaboration with hardcore producers and Dick Rules, reaching number 4 on the single charts. The song's chorus has become an anthem for many fans at Scooter concerts..

"Mind The Gap" was their 10th studio album which was available in three different versions (Basic, Regular and Deluxe). The 28th single, "Shake That!" flavoured with 70s disco sound was released on in most an countries, entering the German Media Control single chart at number 8 and going gold certification in the Czech Republic.

The "Who's Got The Last Laugh Now?" 2006 tour named after the 11th studio album was followed by the release of both the CD and the 2-disc DVD entitled "Excess All Areas", one of the DVDs containing the final Hamburg-concert of the tour and the second containing every video-single released so far.

On , , it was announced that Jay Frog had decided to leave the band to pursue a solo career and was replaced by Michael Simon who had previously remixed some of Scooter's tracks while in search of success with his "Shahin & Simon" project. On Scooter played at the Tufertschwil Open Air in , where Simon debuted as the third member of the band.

The single "Behind The Cow" was premiered at The Dome 40 in on , , and was released on , . The song and its lyrics are based on "" by The KLF, the music video of which was shot in and features rapper . Their 12th album "", which includes songs like "The United Vibe" (cover version of 's "Catch the Fox"), "Scarborough Affair" or "The Shit That Killed Elvis" (collaboration with , the frontman of American fun-rock-band , who co-wrote the song), was released on , . The second single release of "The Ultimate Aural Orgasm" was "Lass Uns Tanzen" which appeared in stores on .

On , Scooter released a new single called "The Question is What is the Question", the release of which surprised many of their fans as they were expecting a third single from the current album rather than entirely new material. The band released a cover version of classic 70's track "How Do You Do" by . Scooter released their 13th studio album, "", on , , containing all three singles ("The Question is What is the Question", "And No Matches" and "Jumping All Over the World"). A limited edition of the album contains a bonus CD including all of their German top ten hits, from "Hyper, Hyper" to "How Much Is The Fish?" as well as a previously unreleased version of "The Question Is What Is The Question?

November 2007 saw the band make their debut tour of , never having visited the country before despite a #1 single there (The Logical Song) some 6 years earlier. They performed at the famous rave party in as well as in , and Perth.

In March 2008, the group embarked on their first arena tour of the UK as part of "Clubland Live", appearing alongside other All Around The World acts such as and . During this tour, Scooter performed the retooled version of their fourth single "I'm Lonely" from ""; the single was released in Germany on , . "The Question Is What Is The Question" was released in the UK the same week, charting at number 49. However, the band made international news in May 2008 when their album "Jumping All Over The World" unexpectedly entered at number 1 in the , replacing Madonna's album "Hard Candy" after just one week

In 1998, Scooter made a in popular German action/crime TV series "". In the episode titled "Tödlicher Ruhm" ("Deadly Fame"), H. P. Baxxter is held for by a young DJ who accuses him of stealing lyrics for the song "The Age of Love". [ [http://www.imdb.com/title/tt0507506/ "Alarm für Cobra 11 - Die Autobahnpolizei: Tödlicher Ruhm] at the ]