Whopper
This article is about the hamburger. For the candy, see Whoppers. For other uses, see Whopper (disambiguation).

The Whopper sandwich is the signature hamburger product sold by the international fast-food restaurant chain Burger King and its Australian franchise Hungry Jacks. Introduced in 1957, it has undergone several reformulations including resizing and bread changes. The burger is one of the best known products in the fast food industry; it is so well known that Burger King bills itself as the Home of the Whopper in its advertising and signage.

The company markets several variants of the burger as well as other variants that are specifically tailored to meet local taste preferences or customs of the various regions and countries in which it does business. To promote continuing interest in the product, Burger King occasionally releases limited-time variants on the Whopper.

The Whopper is a hamburger, consisting of a flame grilled quarter-pound (113.4 g) beef patty, sesame seed bun, mayonnaise, lettuce, tomato, pickles, ketchup, and sliced onion. Optional ingredients such as processed cheese, bacon, mustard, guacamole or jalapeño peppers may be added upon request. Regional and international condiments include BBQ sauce, salsa and guacamole. Burger King will also add any condiment it sells, including tartar sauce, honey mustard, steak sauce and hot sauce. It is available with one, two or three beef patties and in a smaller version called the Whopper Jr, or without meat in a version called the Veggie Whopper. Additionally, Burger King has sold several different promotional varieties throughout the years as limited time offerings. 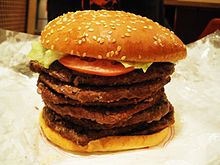 The Windows 7 Whopper was sold in Japan for the promotion of Microsoft's Windows 7 operating system. The hamburger contained seven stacked beef patties and measures 13 cm (5 inches) high.[1] It was originally planned to be available for only 7 days starting on October 22, 2009.[1] Due to their success in selling 6,000 sandwiches within the first 4 days, Burger King decided to extend the promotion period to 16 days, ending on November 6.[2]

The campaign was met with unexpected popularity in Japan, sparking multiple YouTube videos and blog posts about the burger.[2] However, the promotional effort received strong criticism from business and tech journalists. Computerworld blogger Preston Gralla claimed that it "could be one of Microsoft's worst promotional ideas ever."[1][3]

The Pizza Burger is a burger sold exclusively at the BK Whopper Bar location in Times Square, New York City in September 2010. It consists of four Whopper patties on a 9.5 inch sesame bun,[4] sliced into six pieces and is topped with pepperoni, mozzarella, Tuscan pesto and marinara sauce.[5] The burger contains more than the recommended daily allowance of calories for men at 2520 calories, with 144 grams of fat, 59g of which is saturated.[4] An average Pizza Burger contains 3,780 mg of sodium, more than double the recommended daily allowance for adults.[4][6] However, according to Burger King's vice president of global marketing, John Schaufelberger, the burger is not intended to feed just one person.[7]

The Angry Whopper swaps jalapeños, "Angry Sauce" and "Angry Onions" for the pickles, ketchup and raw onions while adding pepperjack cheese and bacon.[8] The sandwich, originally released in Europe, made its way to the United states in 2010. The sandwich was released with a viral marketing push created by Burger King's advertising agency at the time, Crispin Porter + Bogusky. The two tiered program, designed to create a word-of-mouth marketing push, featured a webpage that allowed consumers to create an "Angry-gram" that could be emailed to other individuals. The form letter format page would send an insulting email to a recipient of choice from the sender. The second part consisted of a Facebook-oriented program where the company would issue a coupon for a free sandwich if the consumer would de-friend 10 people on their Facebook page.[9]

The Chicken Whopper is still available in parts of Europe and the Middle East. In the U.S., Turkey, New Zealand, Portugal, Italy and Spain it has been replaced by the TenderGrill Chicken Sandwich. 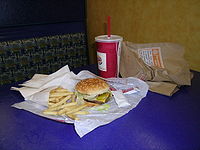 A meal including a Whopper, Jr., fries and a drink.

The Whopper was created in 1957 by Burger King founder James McLamore and sold for 37 cents.[10]

For several years in the 1980s, the weight of the Whopper was increased to 1/3 lb. The bun was also replaced by a Kaiser roll.[11] The Whopper reverted to the original formulation a few years later. The "Third Pound Whopper" made a return in the early 2000s, but has since been discontinued again.

The packaging has undergone many changes since its inception. Unlike McDonald's, the company never used the clamshell style box made of Styrofoam, so when the environmental concerns over Styrofoam came to a head in the late 1980s, the company was able to tout its use of paperboard boxes for its sandwiches.[12] To cut back on the amount of paper that the company used, the paperboard box was fully eliminated in 1991 and was replaced with waxed paper.[13] For a short time after BK began moving to a fresh made model (certain sandwiches are made only after being ordered instead of being pre-made ahead of time), BK used an aluminum foil wrapping similar to Wendy's sandwich packaging.

One of the original slogans of the Whopper advertised by Burger King was There are 1024 ways to have a Whopper;[14] the claim is based on an exponential function of whether the sandwich has the ingredient or not. Represented by a binary number of 0 or 1, raised to the power of number of possible ingredients at the time, ten, thus 210 =1,024. This claim was later expanded to There are 221,184 possible ways for a customer to order a Whopper sandwich.[15] Other slogans include It takes two hands to handle the Whopper and Burger King: Home of the Whopper.[16]

A 2007 advertising campaign celebrating the golden anniversary of the Whopper showed real customers in Las Vegas reacting to the false news the Whopper has been discontinued. While it was not permanently discontinued, the ad claims it was discontinued for one day. Later versions of the ads had customers receiving a Big Mac or Wendy's Single and their reactions to the sandwich. In-store ads, such as posters and tray-liners, attack the size and quality of the Big Mac.[17][18] The campaign won the 2009 Effie Award as one of the best restaurant advertising promotions for 2007–2008.[19]

The 2008 movie releases of Indiana Jones and the Kingdom of the Crystal Skull saw a promotional tie-in with the new Indy Whopper and the The Incredible Hulk with the Angry Whopper.[8]

In December 2008, Burger King purchased the rights to an advertising campaign that centered on a taste-test marketing campaign, dubbed "Whopper Virgins". The test claimed to target participants who were unaware of the existence of Burger King or McDonald's, and had never eaten a hamburger. Three remote areas of the world—Baan Khun Chang Kiean, Thailand; Kulusuk, Greenland; and Budeşti, Romania—were targeted. In the test, the "virgins" were asked to try both the McDonald's Big Mac and the Burger King Whopper, and give their preference, if any. According to the advertisements and accompanying mini-documentary, the Whopper was the most popular sandwich among the test subjects.[20][21]

Because of the wide knowledge of the Whopper in the public marketplace, competitors such as McDonald's and Wendy's have attempted to create a corresponding Whopper-style burger, often nicknamed a Whopper Stopper.[22] Wendy's created the Big Classic with similar toppings but served on a bulkie roll, while McDonald's has created at least six different versions, including the McDLT,[23] the McLean Deluxe and the Big N' Tasty.[24]