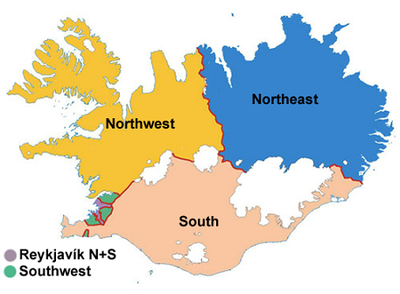 Iceland is divided into 6 constituencies for the purpose of selecting representatives to the Alþingi (parliament).

The current division was established by a 1999 constitution amendment and was an attempt to balance the weight of different districts of the country whereby voters in the rural districts have greater representation per head than voters in Reykjavík city and its suburbs. The new division comprises three countryside constituencies (NW, NE and S) and three city constituencies (RN, RS and SW). The imbalance of votes between city and country still exists and a provision in the election law states that if the number of votes per seat in parliament in one constituency goes below half of what it is in any other constituency, one seat shall be transferred between them. This has actually occurred and as of the elections in 2007, one seat was transferred from the Northwest constituency to the Southwest one.

The constituencies are the following (number in brackets indicate number of representatives for that constituency out of 63 total):

Media related to Constituencies of Iceland at Wikimedia Commons