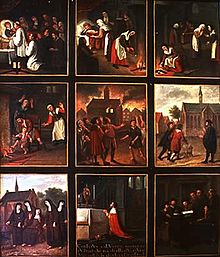 A painting with nine panels telling the story of the miracle.

A stille omgang (silent "procession" or circumambulation) is an informal ritual that served as substitute for the Roman Catholic processions that were prohibited after the Reformation in the Netherlands in the 16th century. The biggest and best known is the Stille Omgang of Amsterdam, which is still performed every year in March.

This procession commemorates the Miracle of the Host of 15 March 1345, a miracle which involved a dying man vomiting upon being given the Holy Sacrament and last rites. The Host was then put in the fire, but miraculously remained intact and could be retrieved from the fire in one piece without the heat burning the hand of the person that retrieved it. This miracle was officially recognised by the Roman Catholic Church, and a large pilgrimage chapel, the Heilige Stede or Holy Site, was built where the house had stood, and the Heiligeweg (Holy Way) as a pilgrimage route to it.

The Stille Omgang fell out of practice at the beginning of the 19th century, but was revived in 1881. About 8,000 Catholics, and also some non-Catholics, from all over the Netherlands take part in it, after first having joined a mass in one of Amsterdam's churches. The procession always occurs on the night of Saturday to Sunday following the start of the 'Mirakelfeest', which is on the first Wednesday after 12 March.