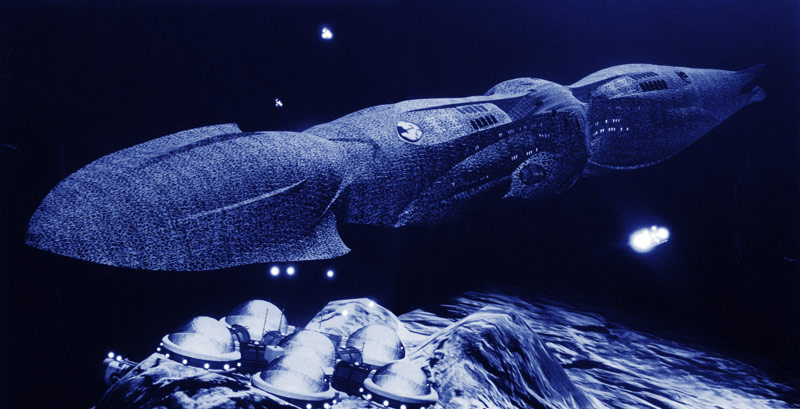 "seaQuest" is the brain child of Captain Nathan Bridger who designed the boat in the early , however, Bridger left the navy 3 years before construction on the ship was completed. Upon its completion, "seaQuest" was the largest submarine and ever constructed, measuring 307.1 m from stem to stern with a crew of 88 military and 124 science personnel. The ship could travel at speeds up to 160 knots (295 km/h) and was propelled by twin fusion reactors. The "seaQuest" was coated in a genetically engineered bio-skin that remained completely inert against (most) marine bacteria and organisms with a crush depth of more than 9 km of water. The ship is equipped with a complement of standard torpedoes, as well as nuclear tipped s (believed to be named the Triton II), intercepts, sea to air missiles, state-of-the art laser banks, as well as a specialized "grapnel torpedo" which, when fired, would impact a target and allow the "seaQuest" to tow or retract.

The ship was also equipped with a series of WSKRS (pronounced "whiskers"; Wireless Sea Knowledge Retrieval Satellites); small sensor probes that were remotely controlled by the ship's sensor chief. The WSKRS codenamed "Mother", "Junior", and "Loner", served as the "eyes and ears of "seaQuest" and could relay telemetry data back to the ship miles away. In a pinch, the WSKRS could also be used as an emergency power supply and could be reconfigured for communication purposes. A special "" was also part of the "seaQuest"'s arsenal which allowed the operator to manually control the probe and conduct delicate repair operations or investigate various anomalies. The ship's communications buoy could also be detached to enable contact with surface bound vessels.

The ship was also equipped with a series of sea launch shuttles, as well as a series of speeder shuttles, a series of sea crab-class vehicles and eventually, a specialized, high-speed, one-man submersible named "The Stinger" by one of the designers, . In 2032, the ship was equipped with two high-speed spector-class sub-fighters; high speed submersibles capable of engagements up to speeds approaching 300 knots (554 km/h), comparable to (but not equal to) the Lysander-class sub-fighter engineered by Deon International.

"seaQuest" featured an emergency override called the "Dead Man's Codes"; in the event that the ship's crew was incapacitated or dead, the codes could be used to bring the ship to any location on the globe by remote. The ship's helm control has the final authority over the ships course (Episode: "And Everything Nice"). The UEO Secretary General kept one set of the codes while another set was flash-fed into the computer banks and scrambled at random intervals.

Originally designed as a purely military vessel, the "seaQuest" underwent a refit in following the Livingston Trench Incident and the signing of the charter.

Under the command of Captain Marilyn Stark, the "seaQuest" converged on the Livingston Trench where a showdown between various undersea confederations could have erupted in nuclear war. The "seaQuest" almost instigated hostilities when Stark planned to fire first in violation of NORPAC orders. Commander Ford instantly relieved her of command and the situation was defused.

Thirteen months later, after an extensive scientific refit, the new UEO lured retired Captain Nathan Bridger aboard the ship as part of a VIP tour, however, once aboard, the "seaQuest" shoved off, effectively trapping Bridger aboard. Ford, under the orders of Admiral William Noyce, behaved in a very cowardly manner in an attempt to lull Bridger to take command. The ploy worked and Bridger signed aboard as captain. ("To Be or Not to Be")

The "seaQuest" unwittingly brought aboard biochemist and war criminal Dr. Rubin Zellar several weeks later after Zellar had assumed the identity of his ice prison's warden. With free rein on the "seaQuest", Zellar held the crew hostage with a toxin frozen in ice and gained access to the missile control room where he coerced Bridger and Ford to activate the ship's missiles and fire them towards UEO Headquarters in . However, Bridger had wisely disabled all the missiles once the crew learned of Zellar's true identity and disaster was averted. ("Games")

The ship suffered significant damage when the communications buoy was struck by lightning several weeks later. With all power knocked offline, an away team stranded in a hurricane on the surface of the water, and a downed French sight-seeing submarine to search for, Bridger suggested that one of the WSKRS could be used to power the bridge stations enough to locate the French ship, save the away team and return to the ship to for repairs. ("Bad Water")

Several months later, "seaQuest" was hijacked by a group of ecologic extremists led by Colonel Steven Shrader, who planned to the use the ship's computer to obtain "shut-down codes" for various global pollutants. Shrader's plans were foiled when Commander Ford flooded the boat, causing Shrader and his men to panic and attempt to escape. However, Shrader failed to realize that because the "seaQuest" was sinking, the increased water pressure would crush his ship. He ultimately died in the attempt, while Lucas and Krieg were able to activate Captain Bridger's prototype "hull siphons" which pumped the flooding water out of the boat and refloated the ship. ("Nothing But the Truth")

The "seaQuest" was also involved with several space-related incidents, such as the recovery of the "Wayfarer", the first manned space vessel to reach as well as uncovering an ancient derelict alien starship which had been entombed in an underwater ridge for over a million years. The crew discovered that there were still active holographic projections aboard the ship that boarded the "seaQuest" and expressed their desire to have formal introductions with the human race. The bridge crew elected to send a message to the alien homeworld themselves and not tell the military about what had truly happened. ("Such Great Patience")

Unfortunately, the "seaQuest" met her ultimate demise at the end of its tour of duty when Captain Bridger ordered all hands to abandon ship and locked the ship's autopilot into a direct course with a lava well that threatened to raise ocean temperatures and melt the polar ice caps. Detonating the ship's nuclear weapons. the massive explosion of the "seaQuest" was enough to seal the rupture and avert ecologic catastrophe. ("Higher Power")

With the UEO so impressed with the original "seaQuest"'s performance, they quickly provided the funds to commission a new boat, which shoved off in with some new bridge crewmembers. The new ship's first task was to stop the . (Genetically Engineered Life Forms) terrorists from destroying the world's oxygen production facilities. Bridger was able to convince the G.E.L.F. leader that destroying the human race would also result in their annihilation as well. ("Daggers")

Months later, the "seaQuest" was propelled into the future 250 years where the crew discovered that mankind had annihilated itself due to its dependence on computers for entertainment. Lucas was able to deactivate the remaining computer system, allowing the only two humans left on Earth to rely on each other to survive and repopulate the species. While Lucas believed that what they've seen will be the way the future will play out, Captain Bridger believed that they still had the power to change it. ("Playtime")

The "seaQuest" became the first ship to uncover evidence of the lost continent of when Commander Ford discovered a warrior's helmet and sword at the bottom of the ocean. However, the helmet contained a curse of the previous owner, one that consumed Captain Bridger and Chief Ortiz. Fortunately, they were saved by a descendant of the lost continent through the employ of Dr. Smith's telepathic abilities. ("Lostland")

However, another tragedy befell the "seaQuest DSV" as it was lost with all hands on , with no debris, no trace. In actuality, the ship had been forcibly drawn from the water by a powerful alien and swept over a million light years away to the far distant planet named Hyperion, where the ship was (apparently) destroyed by a devastating impact from a barrier mine. The only survivors of the crew were Lucas and Dagwood, who appeared destined to spend the rest of their lives on the alien world. ("Splashdown")

After ten years of searching, Captain Oliver Hudson eventually found the "seaQuest" in a cornfield with no idea of how it ended it up there or how long it had been there. The crewmembers also reappeared on Earth with no memory of what had happened to them or their ship. Nevertheless, in the ten years following their disappearance, the world had become a much more unstable place following the rise to power of President Alexander Bourne and his nation of (formerly "New Australia"). With the world on the apparent brink of war, Captain Bridger decided to retire from the navy, leaving Captain Hudson in command of the "seaQuest." ("Brave New World")

"seaQuest" was nearly the catalyst for a nuclear holocaust again when environmental radical, and newly appointed UEO ambassador Max Scully, seized control of the ship's computer, deactivated the life-support systems incapacitating the crew. In control of the boat, Scully fired the ship's laser banks at an underwater nuclear waste stockpile called "Freedom Point." The explosion would have wiped out the entire human race, save for the select few living in his underwater colony called , had Captain Hudson and Lucas not been able to commandeer a supply hauler and drive it into the nuclear waste, effectively cooling down the uranium deposit. ("Resurrection")

The ship would soon travel in time again on , due to a freak imbalance in one the ship's reactor cores; this time back seventy years to , right in the middle of the . Due to "seaQuest"'s encroachment in the timeline, they inadvertently were the trigger of a nuclear war that wiped out mankind. Using the discontinuity in their reactor core, they traveled back two days further in time and were able to avert the holocaust. ("Second Chance")

Since "seaQuest DSV" was cancelled in 1996, the future of the ship remains uncertain. However, numerous fan-based Internet series based on "seaQuest DSV" have cropped up over the years chronicling the fate of the "seaQuest", however, their status in the "seaQuest canon" remains .