The Cessna 162 Skycatcher is a side-by-side two-seat, high-wing, strut-braced, tricycle gear light-sport aircraft (LSA). The latest aircraft in the Cessna general aviation product line, its intended market is flight training and personal use.[5]

The Skycatcher received its ASTM LSA approval in July 2009.[6]

N158CS, the proof-of-concept, on display at the EAA AirVenture Oshkosh 2006.

Cessna had announced its intentions to study the feasibility of developing and producing an LSA on 6 June 2006.[7] The concept design was unveiled on 24 July 2006 at EAA AirVenture Oshkosh as the Cessna LSA (also referred to as the Cessna Sport), via a marketing study of the feasibility of producing an aircraft compliant with the U.S. Federal Aviation Administration's new Light-Sport Aircraft category.

On 13 October 2006, nine months after launching the program, the concept prototype aircraft, registered N158CS, first flew, departing McConnell Air Force Base for Wichita's Mid-Continent Airport and reaching a speed of 110 knots (200 km/h). Cessna formally launched the Skycatcher program 10 July 2007, following with a press event on 22 July 2007 at EAA AirVenture Oshkosh [8] that unveiled a full-scale mockup and details about the planned production version.

The conforming prototype had its first flight on 8 March 2008[1] and the first initial production configuration aircraft flew on 5 May 2008.[9]

The company carried out testing of the aircraft beyond the ASTM Light Sport Aircraft requirements, including ground vibration testing and a full airframe fatigue test program on a production aircraft. In July 2009 Cessna announced that the 162 had completed flight testing to ASTM standards.[10][11]

On 9 August 2007 Cessna Aircraft announced that they had orders for 720 Skycatchers totaling US$75M.[12] By 24 November 2007 Cessna had 850 firm orders and by the end of 2008 the company had confirmed over 1,000 orders.[13][14] In July 2009, orders were still reported at "over 1,000." Cessna vice president of propeller aircraft sales John Doman said sales activity had been slow because customers did not want to wait approximately four years for a delivery slot.[11]

In December 2009 the company delivered the first production Skycatcher to its initial customer, Cessna CEO Jack Pelton's wife, Rose Pelton. The company intended that the 2010 production rate would be 300 to 400 a year, but only 30 aircraft were delivered in 2010.[2][15][16]

On 27 November 2007 Cessna announced that the Cessna 162 would be made in the People's Republic of China by Shenyang Aircraft Corporation, which is a subsidiary of Aviation Industry Corporation of China, a Chinese government-owned consortium of aircraft manufacturers.[18] By manufacturing the aircraft in China, Cessna reported that it saved US$71,000 in production costs per aircraft produced. A second reason cited for moving production to Shenyang Aircraft Corporation was that Cessna at that time had no plant capacity available in the USA.[19]

The decision to produce the aircraft in China has been controversial and Cessna has received a high degree of negative feedback from Cessna 162 customers and potential customers.[20][21]

The first production Cessna 162 had its initial flight at Shenyang Aircraft in China on 17 September 2009. Customer deliveries started in December 2009.[21][22] 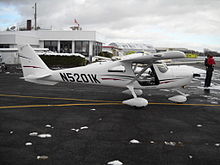 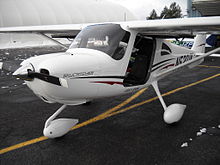 The Cessna 162's design has evolved considerably from the first prototype, including the wing position and tail configuration. The high-wing monoplane has fixed tricycle landing gear, with a castering nosewheel. The wingspan is 30 feet (9.14 m) and internal cabin width is 44 inches (1.12 m) at shoulder height. The doors are different from previous two-seat Cessna models in that they open by swinging upward. The controls are unusual for a Cessna in that they have a single hand panel mounted yoke instead of the usual two hand panel mounted yoke.

The aircraft's structure is mostly aluminum with a fiberglass cowling. Cessna LSA Project head Neal Willford indicated in August 2006 that Cessna was investigating the use of "match hole drilling" to reduce costs and simplify construction of the design. This technique is widely used in the kit-plane industry and in construction of larger aircraft, but would be Cessna's first use in its single-engine line. On 9 October 2007 Cessna announced that a Ballistic Recovery Systems airframe ballistic parachute system will be a factory-installed option on the Cessna 162.[23][24]

The Cessna 162 is equipped for day and night VFR flying only.[25] Production aircraft are delivered with a Garmin G300 EFIS installed, as well as a Garmin SL40 communications radio, a GTX327 transponder, and a 121.5 MHz ELT. Flight data is presented on the G300 in a single, split-screen combination primary flight display and multi-function display. Information can also be shown on two full-screen displays with installation of a second screen, which is a purchase option. An autopilot and an audio panel are also available options.[26]

A non-conforming prototype Cessna 162, registered N162XP, crashed on 18 September 2008, in a treeline near Douglass, Kansas, approximately 20 miles (32 km) southeast of Wichita, Kansas. The test pilot parachuted to safety and suffered only minor injuries. The prototype had flown about 150 hours prior to the accident.[29][30]

The National Transportation Safety Board stated on 18 September 2008 that the Cessna 162 was registered in the experimental category and was conducting a test flight when the accident occurred. The test sequence involved a series of stalls starting at 10,000 feet (3,000 m). The aircraft entered an unintentional flat spin and was not under control at 5,000 feet (1,500 m), at which point the test pilot bailed out of the aircraft. Cessna confirmed that the 162 entered a spin from cross-controlled, power-on stall, that the spin became flat and recovery was not possible. The company indicated that the testing was outside that required for LSA certification and that the accident will result in only small design changes. The aircraft was equipped with a Ballistic Recovery Systems parachute, but it failed to deploy when activated.[31][32][33][34][35]

Despite earlier claims that the design would undergo only small changes as a result of the crash of the prototype, in late 2008 the 162 received a redesigned vertical stabilizer. The new fin is of greater area and less sweep than the original. Cessna stated wind-tunnel testing of the new configuration showed that it now had no unrecoverable spin characteristics. The redesigned tail was first flown on N162CE, the first production-conforming aircraft on 15 December 2008.[14][22]

Another focus of design changes has been weight savings, as a result the 162's seats have been redesigned and the seat material changed from composite to aluminum. With the new larger fin the dorsal fin was unneeded and was deleted from the design to save weight.[14][22]

N162CE was involved in an accident during a test flight on 19 March 2009 near Wichita, Kansas. During aggressive spin testing, with power on and in a cross-controlled condition, the aircraft entered a "rapid and disorienting spin" and the test pilot was unable to recover control of the aircraft. The test pilot successfully deployed the aircraft's ballistic recovery parachute, which stopped the spin, but, despite being designed to be jettisonable, could not be released from the aircraft. Since the aircraft was too low for a bail-out, the pilot remained with the aircraft, which crash-landed sustaining damage to the gear, but leaving the pilot uninjured. The pilot exited the aircraft and attempted to remove the parachute, which remained attached to the aircraft. Wind then dragged the aircraft 0.6 miles into a fence, leaving it inverted and heavily damaged. The accident left Cessna with no flying Skycatcher aircraft in the testing program.[36][37][38][39][40]

Following the crash of the second prototype, a company spokesman stated that all the details about the program's future are under review by the company.[41] On 25 March 2009 Cessna CEO Jack Pelton confirmed that the 162 program would continue, saying: "The need for a modern, cost-effective two-seat trainer aircraft has never been greater, and we believe we are well positioned to meet that need. The Skycatcher program is an important part of our strategy."[40]

The final production 162 incorporated a thicker wing and further changes to the tail, including a ventral fin, to make the aircraft more resistant to spins.[15]

In January 2010 the company announced that customer deliveries of production 162s would be delayed by six to ten months. The company indicated that most of the delay was due to modifications required to aircraft produced by Shenyang Aircraft as a result of further spin testing and the earlier crashes of the prototypes. The aircraft will be delivered from China, assembled by Cessna contractor Yingling Aviation and then modified by increasing the rudder surface area and decreasing the elevator and aileron travel. At some point in the future these changes will be incorporated into the Chinese production line.[42] 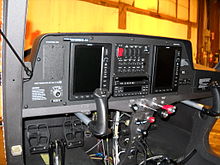 Cessna 162 Skycatcher Instrument panel. This aircraft is a factory demonstrator and has the second optional EFIS display installed

Data from Flying Magazine[43] and Cessna.com[5]