The Roman Catholic Church of France, sometimes called the "eldest daughter of the Church" owing to its early and unbroken communion (2nd century) with the bishop of Rome, is part of the worldwide Catholic Church. The French church is under the spiritual leadership of the Pope, curia in Rome, and the Conference of French bishops.

It is estimated that 64% of France's population are Catholic, though much fewer are regular churchgoers.[1] The church is organised into 98 dioceses, served by 20,523 priests.[2] It takes pride in some of the most beautiful churches in all of Christianity, including Notre Dame de Paris, Chartres Cathedral, Reims Cathedral, and Basilique du Sacre-Coeur, Eglise de la Madeleine, and Amiens Cathedral. Its shrine, Lourdes, is visited by 5 million pilgrims yearly.[3] Some of its most famous saints include St. Thérèse of Lisieux, St. Irenaeus, St. John Vianney the Cure of Ars, St. Joan of Arc, St. Bernadette, Louis IX of France, and St. Bernard of Clairvaux. 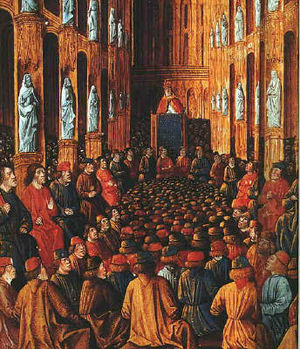 Pope Urban II at the Council of Clermont, given a late Gothic setting in this illumination from the Livre des Passages d'Outre-mer, of c 1490 (Bibliothèque National)

According to long-standing tradition, Mary, Martha, Lazarus and some companions, who were expelled by persecutions from the Holy Land, traversed the Mediterranean in a frail boat with neither rudder nor mast and landed at Saintes-Maries-de-la-Mer near Arles. Provençal tradition names Lazarus as the first bishop of Marseille, while Martha purportedly went on to tame a terrible beast in nearby Tarascon. Pilgrims visited their tombs at the abbey of Vézelay in Burgundy. In the Abbey of the Trinity at Vendôme, a phylactery was said to contain a tear shed by Jesus at the tomb of Lazarus. The cathedral of Autun, not far away, is dedicated to Lazarus as Saint Lazaire.

The first written records of Christians in France date from the 2nd century when Irenaeus detailed the deaths of ninety-year old bishop Pothinus of Lugdunum (Lyon) and other martyrs of the 177 persecution in Lyon.

In 496 Remigius baptized Clovis I, who was converted from paganism to Catholicism. Clovis I, considered the founder of France, made himself the ally and protector of the papacy and his predominantly Catholic subjects.

The Council of Clermont, a mixed synod of ecclesiastics and laymen led by Pope Urban II in November 1095 at Clermont-Ferrand triggered the First Crusade.

The Avignon Papacy was the period from 1309 to 1377 during which seven French popes, resided in Avignon.

Prior to the French Revolution, the Catholic Church had been the official state religion of France since the conversion to Christianity of Clovis I, leading to France being called "the eldest daughter of the Church." The King of France was known as "His Most Christian Majesty." Following the Protestant Reformation, France was riven by sectarian conflict as the Huguenots and Catholics strived for supremacy in the Wars of Religion until the 1598 Edict of Nantes established a measure of religious toleration.

Napoleon Bonaparte established the 1801 Concordat, whereby the State would subsidize the Catholic religion (recognized as the one of the majority of the French), as well as Judaism, and the Lutheran and Calvinist branches of Protestantism. However, after the 1814 Bourbon Restoration, the ultra-royalist government headed by the comte de Villèle voted the 1825 Anti-Sacrilege Act, which condemned by capital punishment any stealing of consecrated Hosts. The law was repealed in the first months of the July Monarchy (1830–1848).

Growing discontent with respect to the influence of the Catholic Church in education and politics led to a series of reforms during the Third Republic reducing this influence, under the protests of the Ultramontanists who supported the Vatican's influence. Anti-clericalism was popular among Republicans, Radicals and Socialists, in part because the Church had supported the Counterrevolutionaries through-out the 19th century. After the 16 May 1877 crisis and the fall of the Ordre Moral government led by Marshall MacMahon, the Republicans voted Jules Ferry's 1880 laws on free education (1881) and mandatory and laic education (1882), which enraged the Catholics.

Pope Leo XIII's 1891 Rerum Novarum encyclical finally pushed recalcitrant Catholics, such as Albert de Mun, to "rally" to the Republic. However, the papal encyclical has always been questioned by some Catholics, including those members of the Action française reactionary movement. Roughly divided into a left-wing which supported liberalism and republicanism, freedom of thought, and defended Captain Dreyfus, and a right-wing which supported ultra-montanism and struggled for a hypothetical "Restoration" of the Ancien Régime, France in the end of the 19th century bitterly opposed itself on secularism laws.

Thus, the 1905 French law on the separation of Church and State removed the special status of the four state religions (although by the Briand-Ceretti Agreement the state subsequently regained a role in the procedure for nominating bishops), except in Alsace-Lorraine, at the time part of Germany, but left to them the use without fee of the churches that they used prior to 1905. However, Emile Combes, a member of the Radical-Socialist Party strictly enforced these laws, leading to clashes between the Congregationists and the authorities. Anti-clericalism slowly declined among the French left-wing throughout France in the twentieth century, while the question of religion and of freedom of thought seemed to have been resolved. However, it is still present as a defining trait of the left-wing, while most right-wing Frenchmen describe themselves as Catholics (although not necessarily practicing). Thus, the draft laws presented by François Mitterrand's government in the early 1980s, concerning restrictions on the funding of private (and in majority Catholic) schools, were countered by right-wing demonstrations headed by the then mayor of Paris, the Gaullist Jacques Chirac, who was to be his prime minister in 1986 and would succeed him in 1995 as president. In the same way, the 2004 law on secularity and conspicuous religious symbols in schools, revived the controversy twenty years later, although the dividing lines also passed through each political side due to the complex matter of the subject. On this occasion, several Muslim associations have allied themselves with conservative Catholics to reject the law, while one of the consequences of the law was for Muslim college students whom refused to take out their veil or "conspicuous religious symbols" to drop the free, laic, public school system in favor of the private, but publicly subsidized, Catholic schools (where the law does not apply, being restricted to the public education system).

In any case, since the 1905 law on the separation of the Church and State, the prevailing public doctrine on religion is laïcité – that is, neutrality of the state with respect to religious doctrine, and separation of the religious and the public spheres. This state neutrality is conceived as a protection of religious minorities as well as the upholding of freedom of thought, which includes a right to agnosticism and atheism. Although many Catholics were at first opposed to this secular movement, many of them have since changed opinions, finding that this neutrality actually protects their faith from political interference. However, some traditionalist Catholic groups, such as the Society of St. Pius X, push for the return to the Ancien Régime or at least pre-separation situation, contending that France has forgotten its divine mission as a Christian country (an argument already upheld by the Ultras presenting the 1825 Anti-Sacrilege Act).

2006 Statistics from the Roman Catholic Church in France [4] :

Main article: List of the Roman Catholic dioceses of France

Within France the hierarchy consists of: 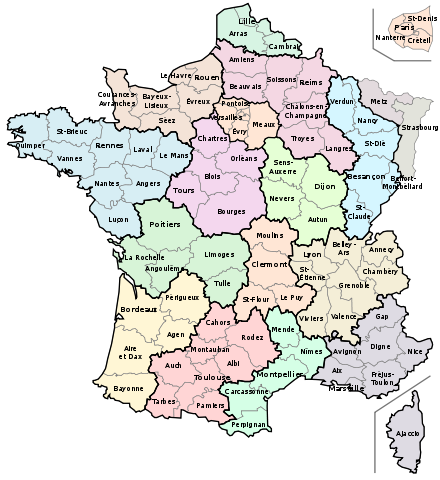 Dioceses of metropolitan France. Provinces are demarcated by red lines and their seats (archdioceses) written in red letters.

Immediately subject to the Holy See:

France is the location of one of the world's major Catholic pilgrim centres at Lourdes.