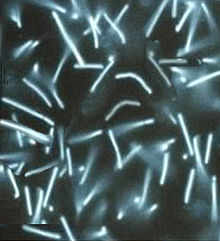 Methanogens are microorganisms that produce methane as a metabolic byproduct in anoxic conditions. They are classified as archaea, a group quite distinct from bacteria. They are common in wetlands, where they are responsible for marsh gas, and in the guts of animals such as ruminants and humans, where they are responsible for the methane content of belching in ruminants and flatulence in humans.[1] In marine sediments biomethanation is generally confined to where sulfates are depleted, below the top layers.[2] Others are extremophiles, found in environments such as hot springs and submarine hydrothermal vents as well as in the "solid" rock of the Earth's crust, kilometers below the surface. Not to be confused with methanotrophs which rather consume methane for its carbon and energy requirements.

Methanogens are usually coccoid (spherical) or bacilli (rod shaped). There are over 50 described species of methanogens, which do not form a monophyletic group, although all methanogens belong to Archaea. Methanogens are also anaerobic.

Although methanogens cannot function under aerobic conditions they can sustain oxygen stresses for a prolonged time.[3] Methanosarcina barkeri is exceptional in possessing a superoxide dismutase (SOD) enzyme, and may survive longer than the others.[4]

Some methanogens, called hydrogenotrophic, use carbon dioxide (CO2) as a source of carbon, and hydrogen as a reducing agent. Some of the CO2 is reacted with the hydrogen to produce methane, which produces an electrochemical gradient across a membrane, used to generate ATP through chemiosmosis. In contrast, plants and algae use water as their reducing agent.

Methanogens lack peptidoglycan, a polymer that is found in the cell walls of the Bacteria but not Archaea. Some methanogens have a cell wall that is composed of pseudopeptidoglycan. Other methanogens do not, but have at least one paracrystalline array (S-layer) made up of proteins that fit together like a jigsaw puzzle.

Although most marine biogenic methane is the result of carbon dioxide (CO2) reduction, a small amount is derived from acetate (CH3COO-).[5] Archaea that catabolize this for energy are referred to as acetotrophic or aceticlastic. Methylotrophic archaea utilize methylated compounds such as methylamines, methanol, and methanethiol as well.

Methanogens play the vital ecological role in anaerobic environments of removing excess hydrogen and fermentation products that have been produced by other forms of anaerobic respiration. Methanogens typically thrive in environments in which all electron acceptors other than CO2 (such as oxygen, nitrate, sulfate, and trivalent iron) have been depleted. In the deep rock they obtain their hydrogen from the thermal and radioactive breakdown of water.

Methanogens have been found in several extreme environments on Earth - buried under kilometres of ice in Greenland and living in hot, dry desert soil. They can reproduce at temperatures of 15 to 100 degrees Celsius. They are known to be the most common archaebacteria in deep subteranean habitats. Live microbes making methane were found in a glacial ice core sample retrieved from three kilometres under Greenland by researchers from the University of California, Berkeley.[8]

Another study[9] has also discovered methanogens in a harsh environment on Earth. Researchers studied dozens of soil and vapour samples from five different desert environments in Utah, Idaho and California in the United States, and in Canada and Chile. Of these, five soil samples and three vapour samples from the vicinity of the Mars Desert Research Station in Utah were found to have signs of viable methanogens.[10]

Some scientists have proposed that the presence of methane in the Martian atmosphere may be indicative of native methanogens on that planet.[11]

Closely related to the methanogens are the anaerobic methane oxidizers, which utilize methane as a substrate in conjunction with the reduction of sulfate and nitrate.[12] Most methanogens are autotrophic producers, but those that oxidize CH3COO- are classed as Chemotroph instead.