David Edgar (footballer)
For other people named David Edgar, see David Edgar (disambiguation).
Not to be confused with Edgar Davids.

David Edward Edgar (pronounced /ˈɛdɡər/; born 19 May 1987 in Kitchener, Ontario) is a Canadian football player who currently plays for Championship side Burnley.[1] He can play as a centre back, right back, left back or defensive midfielder.

Edgar was born to Eddie Edgar and Christine Edgar (née White). His father, a native of Jarrow, Tyne and Wear, was a former professional footballer who played as a goalkeeper for Newcastle United (1 game only) and Hartlepool United in England, as well as playing for the New York Cosmos.[2] His mother is now a teacher in Canada. Edgar grew up in Kitchener, Ontario and attended Blessed Kateri Catholic Elementary School, where he broke many athletic records including the 800 m, 1500m and long jump. He also won athlete of the year in grade eight. A sports-obsessed child, Edgar tried his hand at ice hockey, long and middle distance running as well as football.[2]

When Edgar was nine, his father took him to England to compete in a football tournament which was sponsored by Manchester United. Edgar impressed at the tournament, to the extent he was offered a scholarship deal by Manchester United. However, Edgar turned down the opportunity, opting to stay in Canada for the time being.[3] He also excelled at hockey and was even considered to have had the potential to be drafted into the NHL.[4] From the age of 11 he began playing football at Provincial level for Ontario, along with his now international teammate Jaime Peters.[5] He continued to switch between playing hockey and football, however at 13 years of age he decided to quit hockey and focus primarily on playing football.[4] After impressing in trials for numerous football clubs including Celtic,[6] he was offered a scholarship at the Newcastle United academy, which he accepted. Aged 14, he left Canada and moved into his grandmother's home in Hebburn, Tyne and Wear.

Edgar began playing regularly in the academy and made his debut for the reserve team on 10 April 2003 against Bradford City. He made his debut for the Canada under-20 team on 15 October 2003, (just three months after first appearing at under-17 level), against Panama at the Torneo Mondialito, aged 16. The following month, he was named in the Canada squad for the World Youth Championships, that took place in the UAE. Edgar was an unused substitute in each of Canada's matches, as they finished third in their group. In June, 2005, Edgar was involved in the competition for a second time, appearing in all three of Canada's matches at the 2005 FIFA World Youth Championship in Netherlands. Canada finished bottom of their group. Edgar caught the eye of Spanish club Málaga CF in September, 2005 when Newcastle played the La Liga club in a pre-season friendly game. Málaga, as well as a few English clubs, declared an interest in signing him.[7] However, Newcastle chairman Freddy Shepherd was quick to announce that Edgar was not for sale, and that he had been given a new contract by the club to ward off any further interest.[7] Edgar began making more regular appearances in the reserve team during the 2005–06 season. On 19 May 2006, while celebrating his nineteenth birthday, he played and scored in the Canadian Under-20 side's 2–1 victory over the Brazilian Under-20 side. This was the first victory Canada have ever had over Brazil in any level of men's football.[8] 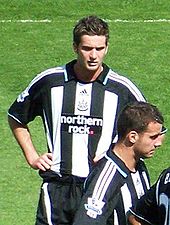 David Edgar playing for Newcastle in 2008.

Edgar continued to appear for Newcastle's reserves and he was called up to the first team squad due to a lengthy injury list midway through the 2006–07 Premiership season. He made his first team debut for Newcastle against Bolton Wanderers on 26 December 2006.[9] On 1 January 2007 during his home debut, he scored his first goal for the club with a long range strike against Manchester United in a 2–2 draw.[10] Edgar was playing in the unfamiliar position of full back as part of a makeshift Newcastle defence consisting of three under-21 players and a winger, due to injuries to first team defenders. Edgar was later named man of the match[11] and drew praise from then Newcastle manager Glenn Roeder for his performance during the game, having kept Cristiano Ronaldo in his back pocket.[12]

During the 2007–08 season, Edgar voiced his concern at his lack of first team football at Newcastle, where at the time of the comment, he had yet to make any appearances for the senior team despite being the reserve team captain.[13] Towards the end of the season he was given a run of games in the first team and was praised by manager Kevin Keegan for his performance against Reading.[14] On 5 May 2007 he signed a contract with Newcastle that kept him at the club until 2009.[15] In April 2008 Edgar stated his belief that he needed to bulk up in order to compete in the Premier League, after facing players like Dean Ashton. On 28 December 2008, Edgar scored his second goal for the club in a 5–1 loss against Liverpool.[16] On 24 May 2009, he was sent off in the last minute of the final game of the season against Aston Villa, a game that Newcastle lost 1–0, thus confirming their relegation from the Premier League. After a terrible season, in which Newcastle failed to win a single match that Edgar featured in - 11 losses and 2 draws in his 13 games - Edgar rejected a contract offered by Newcastle and consequently left the club.

On 1 July 2009, it was announced that Edgar had joined Burnley on a four-year-deal.[17] On 24 December 2009, Burnley and Newcastle announced they had agreed to a transfer fee of £300,000 for Edgar, avoiding a tribunal hearing to settle the matter.[18]

Edgar made his debut for Burnley in the second round of the Carling Cup against Hartlepool on 25 August, however he found himself out of favour under the manager at the time, Owen Coyle, with this appearance being his only one, and was never included in one of his Premier League squads.

After Coyle's controversial departure in January 2010, Edgar was included in the starting lineup of Brian Laws first match in charge, against Manchester United.

In March 2010, Edgar moved to Swansea City on a loan extending to the end of the season.[19] Edgar scored his first goal for Swansea on April 5 in a 3-0 victory over Scunthorpe United. David scored the first goal in the 27th minute from a well positioned corner, Ashley Williams and Shefki Kuqi both followed scoring goals in the home win.[20] In his time with Swansea Edgar was able to make 5 league appearances and score 1 goal before his return to Burnley.

On 31 January 2011 it was announced that Edgar would once again join Swansea City for the remainder of the season.,[1] but weeks later Edgar returned to Burnley due to FIFA refusing to give Edgar international clearance, due to an irregularity in the paperwork.[21]

On 1 February 2007 he was named as Canadian Youth Player of the Year for the 2006 season.[22] In 2007, he helped host Canada compete for the Under-20 World Cup and had been named as one of six ambassadors for the Canadian team during the competition,[23] which was the largest single-sport event ever hosted by Canada.[24] Edgar picked up a groin injury three weeks before the tournament began,[25] which put doubt over how much he would play. An MRI scan showed no tears in his abdominal wall, which helped quell fears that he would be lost to injury for the tournament.[26]

Edgar has been acknowledged for having good leadership skills; he has been described as a player who organizes the other members of his defensive line through his vocality.[27] Dale Mitchell, Edgar's coach for the Canada Under-20 team, has labelled Edgar as a player who rises to the occasion against top competition, stabilizes the defence, and also has the ability to stretch opposing teams' defences.[26]

Edgar has played for Canada Under-17 team and Canada Under-20 team. He was called-up for the 2003 FIFA World Youth Championship at only 16. In November 2008, Canada national football team for the 2010 FIFA World Cup Qualification against Jamaica.

Such was his form at the start of the 2010-11 season for Burnley, Edgar was called up to the Canadian senior team for their friendly against Ukraine on 8 October, but failed to make an appearance. Edgar was called up again for Canada in the countries next game against Greece. David made his senior team debut for Canada on February 9, 2011 as a second half sub in a 1-0 loss to Greece, the game was played at the brand new AEL FC Arena. Edgar was one of three Canadian players to make their international senior debut against Greece, Tosaint Ricketts and Milan Borjan were the other two.[28]

June 6, 2011 Edgar was selected for the 2011 CONCACAF Gold Cup Canadian 23 man roster as a replacement for Dejan Jakovic, who sustained a hamstring injury in a friendly approaching the tournament against Ecuador.[29] Edgar failed to make an appearance during Canada's disappointing Gold Cup, with an early exit out of the group stage.