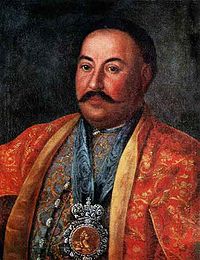 Ataman (variants: Otaman,[1] Wataman, Vataman; Cyrillic: Отаман (Ukrainian), Ватаман (Russian, regional), Атаман (Russian); a word of Turkic origin) was a commander title of the Ukrainian People's Army, Cossack, and haidamak leaders, who were in essence the Cossacks. In the Russia Empire, the term was the official title of the supreme military commanders of the Cossack armies. It had a derogatory suggestion and was also used for the leader of a fisherman artel, a band of robbers or thieves, or leaders of the opposition forces.

The etymology of the word ataman / hetman is disputed. There may be several independent Germanic and Turkic origins for seemingly cognate forms of the word, all referring to the same concept. The hetman form may derive from the German Hauptmann by the way of Polish, like several other titles. The ataman form is more probably of Turkic origin, literally meaning "father of horsemen".[2][3] During certain periods, broadly corresponding with involvement with the Polish-Lithuanian or Polish-Lithuanian-Ruthenian Commonwealth, the supreme leader of Ukrainian Cossacks was called Hetman. The ataman form is more commonly found in Russian periods, and exists in modern Russian, Turkish and Tatar. Also see Hetman: Etymology.

Otamans were usually elected by the Host Council or could have been appointed, especially during the military campaigns. The appointed Otamans were called Acting Otaman (Наказний отаман).

In the Cossack Hetmanate, leaders of non-Cossack military units (artillery, etc.) were also called Otamans. In the Cossack Hetmanate, the title was used for the administrative purposes, such as the head of the city, City Otaman (Городовий Отаман). Later such administrative uses were adopted by the Kuban Cossacks and were common in Kuban Oblast with different variations.

There were various types of Otaman:

Otamans were also in charge of general- and regimental-size artillery units, as well as any volunteer military formations and the Zholdak cavalry.

Atamans were the titles of supreme leaders of various Cossack armies during the Russian Civil War. When Ukraine acquired its independence in 1918, the rank took on different value. Among the Ukrainian Sich Riflemen and the Ukrainian Galician Army, it was equivalent to a major, as is the battalion executive officer today. In the Ukrainian People's Republic, the title was of a general rank. Chief Otoman (Головний отаман) was the general of the Ukrainian Army who was assisted by his deputies, Acting Otomans.

The head of the army of the Ukrainian People's Republic, in particular, Symon Petliura, was called Supreme Otaman (Головний отаман).