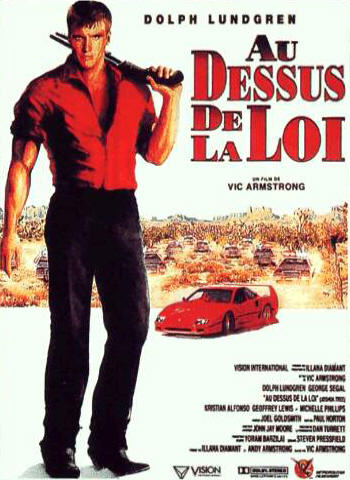 
"Joshua Tree" is a 1993 directed by and -winning , written by and starring , , and . Much of the film was filmed in the of the Sierra Nevada and the desert of the of southeast California.

Wellman Anthony Santee () is a former driver who has turned to a life of crime since the death of his mother. Santee and his friend Eddie "Silver" Turner () bend the law for profit by hauling exotic stolen cars.

Santee's latest assignment is to transport suspicious goods across the desert, but a cop pulls him over. Turner tries to reason with the cop.

But then a pair of cops named Frank Severence () and Jack "Rudy" Rudisill () show up. There is a gun battle in which Turner is killed, and Santee is wounded. Severence murders the highway patrolman, and pins it on Santee.

After recovering in a prison hospital, Santee escapes during transfer to the fictional San Gorgonio Penitentiary and takes a hostage named Rita Marrick (), not suspecting that she's a cop.

Rita keeps her identity a secret from Santee while Rita's partner Michael Agnos () leads the search for the Santee and Rita.

As Santee eludes capture with the help of Eddie's widow and child, Severence and Rudisill horn in on the investigation. Rita's sole escape attempt fails and nearly forces Santee to shoot law enforcers, and she begins harboring doubts about Santee's guilt.

Santee releases Rita and invades Severence's home, forcing his wife Esther () to provide the phone number of former associate Jimmy Shoeshine (), from whom he demands payments due to him and Eddie.

Santee is rejoined by Rita, who finds evidence in the house supporting his claims, and they escape, barely evading gun blasts from Esther and a highway patrolmen.

At Jimmy Sunshine's warehouse, Santee handcuffs Rita out of harm's way and decimates the car thieves' lethal mechanics. Severence and Rudisill arrive and are forced to kill the interfering Michael.

Rita, devastated by Michael's death, joins Santee in a desperate race for life. As Severence and Rudisill close in, a crime scene officer discovers a surveillance tape that recorded Severence killing Michael.

Santee fatally snaps Rudisill's neck during a cliffside struggle. Just as he's about to execute Severence, the police arrive. Severence is taken away, and Santee is vindicated.

In the films action scene, Santee takes on dozens of Chinese in an isolated desert warehouse full of exotic cars. Since is one of the top stuntmen and action directors in this scene is particularly outstanding for its extreme violence as Santee kills innumerable bad guys with his s, , , and . In one outlandish moment he even sets Vic's brother on fire with a flaming paint-sprayer and has a fist-fight with . Popular stuntmen, and regular collaborators with Vic Armstrong,, and also appear in this scene. The gun battle is a lengthy homage to the often seen in n films of the time especially those directed by .

At the beginning of the movie we hear a female voice say "Unit 2-11 officer needs assistance..." over a police radio. Near the end of the film we can hear that same sentence said over another police radio but in a different voice.

All of the exotic cars are actually based replicas of and cars, including the ones in the final chase scene.

The script only called for Santee to kill five henchmen at the warehouse, but for the sake of more action it was changed to dozens and dozens of them.A newspaper clipping in Woody Engstrom's shack is apparently written by Andy Armstrong. is the name of the producer and second unit director and is director 's brother.

A deleted scene involves Severence and Rudy going to Woody Engstrom's ranch to question him about Santee. Rudy almost kills the guard dog for barking at him and Severence is about to kill Woody when other patrol cars arrive, forcing them back down.

The original ending had a scene in the D.A.'s office in which Sheriff Cepeda shows the video of the CCTV footage from Jimmy Shoeshine's warehouse, thus clearing Santee of Deputy Agnos' murder.

trained with for the action scenes of the movie, and she was body-doubled by for her nude scenes.

Director and stunt man had once doubled for in the movie "A Touch of Class".

Of particular note is the atmospheric and highly melodic musical score for "Joshua Tree" was composed by and is widely regarded as one of the film's best features. To date, the score has not been released on CD.

When the film was release on in the the distributor changed the title to "Army of One" to prevent potential renters from thinking that it was the music video. To date the film is still only available with this alternate title in the and is practically out of print. Some stores still carry copies and there are currently no plans for to re-release it.

"" was filmed in with a printed aspect ratio of 2.39:1. Naturally releases of the time only showed the film in a pan and scan (European markets) and open matte release. But since the advent of the film has still not been released in the in its original aspect ratio. It "is" available on in anamorphic widescreen in France but it is dubbed in French with no original language audio track.

Upon its release in the in 1994, the cut a large amount of from the film. Despite still being given the 18-rating, almost every blood , entrance wound, exit wound, moments of excessive gunfire, mutilations and graphic death were abruptly cut from the film. This is especially evident in the scene where Santee is involved in a gun battle with dozens of Chinese as the music jumps all over the place and characters seemingly warp from one side of the set to the other. The has been out of print for a number of years now and there is still no release there.

The French region 2 runs two minutes shorter than the ; two scenes in which Rita lights a are cut and the love scene scene between her and Santee is shortened.

A Bow to Bogart

When resting in a sleazy , Santee watches 's "High Sierra" on . Rita notices him watching with interest and draws parallels between Santee and 's character as the 'hero who goes down with all guns blazing'. "Joshua Tree" was also filmed around many of the same locations as "High Sierra", such as the near .

According to the December 1993 issue of "Impact", "The producers felt that the final showdown in Vic Armstrong's directorial debut didn't live up to the stunts that had preceded it, and do asked for a reshoot."

The original ending has Santee shoot Rudy with the from the top of the ridge many times. Severence grabs Rita and tells him to give it up. Santee appears and says "I'm here, Severence. Let her go!" before stumbling down the ridge. But Severence overpowers him and kicks him off the edge of a cliff by stomping on his bloodied hands. As Severance is about to kill Rita he and Santee fight over a . Rudy is still alive and they both shoot him before Santee pulverizes Severence with his fists. Just as he is about to crush his head with a boulder Santee says "This is for Eddie", which is followed by a brief black and white . Severence says "Go ahead, kid. I'd do it to you" before Santee is interrupted by the . Severence is then arrested by Sheriff Cepeda (Geoffrey Lewis) who claims he has seen the CCTV footage of him murdering Deputy Agnos back at Jimmy Shoeshine's () warehouse. There is a in which Santee is back at his dads ranch and Rita is in her police uniform. He mentions the fate of Eddie's wife and E.G. before kissing Rita goodbye.

The second ending, which is available on the unrated and the French region 2 has an extra fight scene between Santee, Severence and Rudy. Santee only shoots Rudy from the ridge once and Rudy is knocked out as he hits his head on a rock. Santee's descent from the ridge is shorter. His fight with Severence is the exact same but as he kicks Santee of the cliff his hand doesn't have as much blood on it as it did before. Immediately after landing on a ledge Santee starts climbing back up the cliff. Severence teases Rita about killing her but is interrupted by Santee, who is then interrupted by Rudy holding an to his head. Santee gives up and is beaten down by Rudy and Severence. Just as they are about to kill him Rita intervenes and claims that if they do, they'll never get the money he took from Jimmy Shoeshine. Even though the suitcase is hidden under a low bridge elsewhere, Santee pretends it's hidden nearby. This gives him a chance to get the upper-hand over Severence and Rudy and bushwhacks them. All three of them fight but Severence is the first to run off as it's clear he's losing. Rita then beats him with a stick. Santee and Rudy are still fighting but he gets Rudy in a headlock. Rudy's last words before Santee breaks his neck are "Eddie was just a nigger." With Rudy dead Santee rushes back to Severence to stop him from hurting Rita. He pulverizes him and is about to finish him off with a boulder but there is no and no mention of Eddie. The cops arrive and Severence is cuffed by Cepeda who makes no reference to seeing the CCTV footage. Santee is handcuffed right away and the films ends with no or any loose ends tied up.

The third ending is the complete version of the film with the fully tied-up . It runs 108 minutes but this version has never been released in any format.