Martian
This article is about hypothetical or fictional native inhabitants of the planet Mars. For other uses, see Martian (disambiguation). 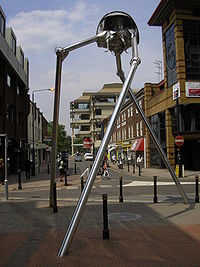 Sculpture of a Wellsian Martian Tripod in the town of Woking.

As an adjective, the term martian is used to describe anything pertaining to the planet Mars.

However, a Martian is more usually a hypothetical or fictional native inhabitant of the planet Mars. Historically, life on Mars has often been hypothesized, although there is currently no solid evidence of life there at present. Some scientists have theorized that there is evidence of fossilized microbes in the meteorite ALH84001.[1][2] 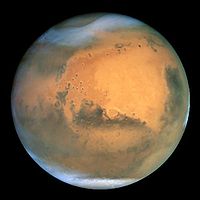 The idea of intelligent Martians was popularized by Percival Lowell[3] and in fiction, especially by Edgar Rice Burroughs' John Carter (Barsoom) Series, H.G. Wells' The War of the Worlds and Ray Bradbury's The Martian Chronicles. Despite the observation by Alfred Wallace that Mars' atmosphere was too thin to support an Earth-like ecology, various depictions of a Martian civilization were popular throughout the 20th century. The first pictures of Mars returned by space probes dashed hopes of contacting Martians, although claims of past Martian civilizations have continued into the 21st century (see Cydonia for one such claim).

Martians, other than human beings transplanted to Mars (as in the film Red Planet), became rare in fiction after the visit of the space probe Mariner 4 to Mars, except in exercises of deliberate nostalgia — most frequently in genres such as comics and animation rather than word-based works. 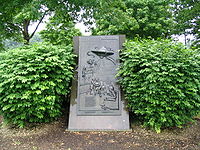 Martians in other media