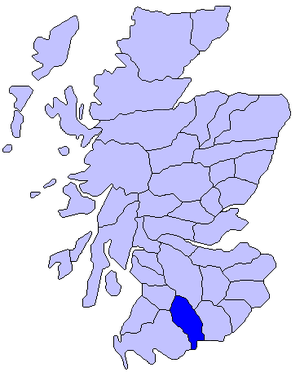 Map of Scotland showing the historic district of Nithsdale

Nithsdale (Srath Nid in Scottish Gaelic), also known by its anglicised gaelic name Strathnith or Stranit, is the valley of the River Nith in Scotland, and the name of the region. It is possible that Strath Nid actually represents the Cumbric Ystrad Nidd as Cumbric (arising as it did from the British Language) was the dominant language in this area from before Roman times until the 11th or 12th Century whereas Gaelic influence here was late and transient. The River Nith flows north to south through the Southern Uplands in south-west Scotland, separating the Lowther hills from the Scaur hills. Nithsdale has historically been a strategic area as it forms an invasion route from England into central Scotland.

Nithsdale was also an historic district of Scotland, bordering Annandale to the east, Clydesdale to the north, Kyle to the north-west and Galloway to the west. The district which was in the Sheriffdom of Dumfries and later became part of the County of Dumfries, one of the counties of Scotland. The main reorganisation took place during the Local Government (Scotland) Act 1889, this Act established a uniform system of county councils in Scotland and realigned the boundaries of many of Scotland’s counties. It is one of three subdivisions of Dumfriesshire, along with Eskdale (previously part of Liddesdale) and Annandale.

Looking east from Auchengibbert Hill with Tynron Doon in the right foreground and the valley of the River Nith (Nithsdale) beyond. Queensberry Hill is by the left edge of the picture with the village of Penpont in the near foreground (left of centre) and Thornhill in the middle distance between Penpont and Queensberry.

Between 1975 and 1996 Nithsdale was one of four local government districts in the Dumfries and Galloway Region.

The district was formed by the Local Government (Scotland) Act 1973 from parts of the counties of Dumfriesshire and Kirkcudbrightshire, namely:

In 1996 Nithsdale was included in the Dumfries and Galloway unitary authority area. The four former districts are now committee areas within the council area.