Clamper (electronics)
Not to be confused with voltage clamp. 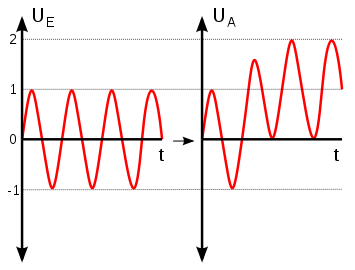 A clamper is an electronic circuit that prevents a signal from exceeding a certain defined magnitude by shifting its DC value. The clamper does not restrict the peak-to-peak excursion of the signal, but moves it up or down by a fixed value. A diode clamp (a simple, common type) relies on a diode, which conducts electric current in only one direction; resistors and capacitors in the circuit are used to maintain an altered dc level at the clamper output.

A clamping circuit (also known as a clamper) will bind the upper or lower extreme of a waveform to a fixed DC voltage level. These circuits are also known as DC voltage restorers. Clampers can be constructed in both positive and negative polarities. When unbiased, clamping circuits will fix the voltage lower limit (or upper limit, in the case of negative clampers) to 0 Volts. These circuits clamp a peak of a waveform to a specific DC level compared with a capacitively coupled signal which swings about its average DC level

A bias voltage between the diode and ground offsets the output voltage by that amount.

A negative unbiased clamp is the opposite of the equivalent positive clamp. In the positive cycle of the input AC signal, the diode is forward biased and conducts, charging the capacitor to the peak value of VIN. During the negative cycle, the diode is reverse biased and thus does not conduct. The output voltage is therefore equal to the voltage stored in the capacitor plus the input voltage again, so VOUT = -2VIN

A positive biased voltage clamp is identical to an equivalent unbiased clamp but with the output voltage offset by the bias amount VBIAS. Thus, VOUT = 2VIN + VBIAS

A negative biased voltage clamp is likewise identical to an equivalent unbiased clamp but with the output voltage offset in the negative direction by the bias amount VBIAS. Thus, VOUT = -2VIN - VBIAS

The figure shows an op-amp clamp circuit with a non-zero reference clamping voltage. The advantage here is that the clamping level is at precisely the reference voltage. There is no need to take into account the forward volt drop of the diode (which is necessary in the preceding simple circuits as this adds to the reference voltage). The effect of the diode volt drop on the circuit output will be divided down by the gain of the amplifier, resulting in an insignificant error.

Clamping can be used to adapt an input signal to a device that cannot make use of or may be damaged by the signal range of the original input.

The schematic of a clamper reveals that it is a relatively simple device. The two components creating the clamping effect are a capacitor, followed by a diode in parallel with the load. The clamper circuit relies on a change in the capacitor’s time constant; this is the result of the diode changing current path with the changing input voltage. The magnitude of R and C are chosen so that

By using a voltage source and resistor, the clamper can be biased to bind the output voltage to a different value. The voltage supplied to the potentiometer will be equal to the offset from zero (assuming an ideal diode) in the case of either a positive or negative clamper (the clamper type will determine the direction of the offset. If a negative voltage is supplied to either positive or negative, the waveform will cross the x-axis and be bound to a value of this magnitude on the opposite side. Zener diodes can also be used in place of a voltage source and potentiometer, hence setting the offset at the Zener voltage.

One common such clamping circuit is the DC restorer circuit in analog television receiver, which returns the voltage of the signal during the back porch of the line blanking period to 0 V. Since the back porch is required to be at 0 V on transmission, any DC or low frequency hum that has been induced onto the signal can be effectively removed via this method.