The Mercedes-Benz 450SEL 6.9 is a high-performance version of the S-Class luxury saloon. It was built on its own assembly line by Daimler-Benz in Stuttgart, Germany and based on the long-wheelbase version of the W116 chassis introduced in 1972. The model was generally referred to in the company's literature as the "6.9", to separate it from the regular 450SEL.

The 6.9 was first shown to the motoring press at the Geneva Auto Show in 1974, and produced between 1975 and 1981 in extremely limited numbers. It was billed as the flagship of the Mercedes-Benz car line, and the successor to Mercedes-Benz's original high-performance sedan, the 300SEL 6.3. The 6.9 also has the distinction of being among the first vehicles ever produced with optional electronically controlled anti-lock brakes, first introduced by Mercedes-Benz and Bosch in 1978. The 6.9's successor — the top of range 500 SEL — continued the 6.9's remarkable self-leveling hydropneumatic suspension as an extra-cost option.

The 6.9 was the first Mercedes-Benz to be fitted with the hydropneumatic self-levelling suspension system developed by Citroën in 1955, unlike the 600 and 6.3 which employed air suspensions. Using a combination of fluid-filled struts and nitrogen-filled pressure vessels or "accumulators" in lieu of conventional shock absorbers and springs, the system was pressurized by a hydraulic pump driven by the engine's timing chain. Compared to the new Mercedes-Benz system, Citroën's was belt-driven, exactly like a conventional power steering pump; failure of the Citroën system thus might result in loss of suspension. Conversely, every unit of the 6.9 was shipped with hard rubber emergency dampers that served as temporary springs and allowed the car to be driven in the event of a hydraulic failure. The special hydraulic fluid required by the system was stored in a tank inside the engine compartment. Not only was the system totally self-adjusting, ride height could be altered by a dash-mounted push-pull knob under the speedometer that raised the car an additional two inches (50 mm) for increased ground clearance. The National Highway Traffic Safety Administration (NHTSA) made this feature illegal in the US market,[citation needed] but it could be enabled simply by removing a limiter at the tank-mounted control valve.

The suspension system gave the 4200 pound (1900 kg) car the benefits of a both a smooth ride and handling that allowed it, in the words of automotive journalist David E. Davis, to be "tossed about like a Mini." The car also featured a model W3B 050 three-speed automatic transmission unique to the 6.9 and a standard ZF limited slip differential both for enhanced roadholding performance on dry pavement and enhanced traction in inclement weather.

The engine was a cast iron V8 with single overhead camshafts operating sodium-filled valves (as are found in piston-driven aircraft) against hardened valve seats on each aluminium alloy cylinder head. Each hand-built unit was bench-tested for 265 minutes, 40 of which were under full load. Bosch "K-Jetronic" electromechanical fuel injection was standard at a time when fuel-injected cars were uncommon. As in all Mercedes-Benz automobile engines, the crankshaft, connecting rods and pistons were forged instead of cast. In non-US trim, the 6.9 l (6814 cc or 417 in³) power plant was conservatively rated at 286 hp (213 kW) with 405 ft·lbf (549 N·m) of torque helping to compensate for the 2.65 to 1 final drive ratio necessary for sustained high-speed cruising. The North American version, introduced in 1977, was rated with 36 fewer horsepower and 45 fewer ft-lb (250 and 360, respectively), due to more stringent emissions control requirements. In the interest of both engine longevity as well as creating some extra space under the hood, a "dry sump" engine lubrication system was used. Dry sump lubrication was originally developed for use in race cars as a way to prevent foaming of the engine oil by the crankshaft, which in turn would create a serious drop in oil pressure. The system circulated twelve quarts of oil between the storage tank and the engine, as opposed to the usual four or five quarts found in V8s with a standard oil pan and oil pump. As a result, the engine itself had no dipstick for checking the oil level. Rather, the dipstick was attached to the inside of the tank's filler cap (accessible from the engine compartment) and the oil level was checked with the engine running and at operating temperature. The dry sump system also had the benefit of extending the oil change interval to 12,500 miles (20,000 km). This, along with hydraulic valve lifters which required no adjusting and special cylinder head gaskets which eliminated the need for periodic retorquing of the head bolts, made the 6.9 nearly maintenance-free for its first 50,000 miles (80,500 km). The 6.9 required little basic service other than coolant, minor tune-ups, oil changes, and replacement of the air, fuel, oil and power steering filters.

Top speed was factory-rated at 140 mph (225 km/h), but some journalists testing the car saw speeds approaching 150 mph (241 km/h). Among those journalists was Brock Yates. Yates was approached by the factory to write promotional literature about the 6.9. He agreed, but under the condition that he could list the car's faults as well as its positives. Daimler-Benz agreed in turn, and Yates was given a US-spec 6.9 to drive from Manhattan to the Road Atlanta grand prix race track in Georgia. There, Yates would drive the car in as-arrived condition at racing speeds for a full 40 laps or just over 100 miles (160 km). The only change made to the car upon its arrival at Road Atlanta was the necessary adjustment of tire pressure. Driving 40 laps was a difficult task even for a purpose-built race car, let alone a street-legal sedan designed and geared for high-speed Autobahn cruising. The 6.9 suffered no mechanical problems and averaged a very respectable 72 mph (116 km/h) throughout the test, completing it with little more than excess dust on the bodywork from the Michelin radial street tires on which the car was driven to Atlanta. Yates was so comfortable driving the 6.9 around the track that he reported having run at least one lap with the sunroof open and the radio on, but the high price of the car made him think better of such risky driving and he finished the test with the radio off and both hands on the wheel.[1] 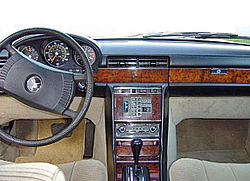 All of this technology came at a very high price. At a time when the most expensive Cadillacs, the mid-sized Seville and full-sized Cadillac Fleetwood Series Seventy-Five limousine each listed for about US$16,000, the 6.9 listed for around $40,000, more than the Big Three but less than most Rolls-Royces. When the car was officially introduced into the North American market for the 1977 model year, the price was well past $40,000 and was $52,995 by the end of production. The only way to get a 6.9 in the US or Canada prior to 1977 was to import one through the grey market. Though the 6.9 was undeniably a luxury car, it was a rather austere one compared to the sheer opulence available in a Rolls-Royce or full-sized Cadillac. The interior was identical to that in the less expensive models except for the push-pull suspension control knob just under the speedometer, a low suspension pressure warning and height adjustment indicator lights in the instrument cluster, and wood trim finished in burled walnut veneer on the dash and console. The rest of the W116 lineup was trimmed in striated zebrano veneer.

The 6.9 lacked expected luxury touches such as power-adjustable outside mirrors or front seats, although a unique power rear seat, heated seats and even orthopedically designed front seats were options. Buyers outside North America could also opt for headlight wipers and washers and/or headlights with a special vacuum-operated linkage whose aim could be adjusted at the dash depending on vehicle load. There was also a new standard feature in 1976: most Mercedes-Benz automobiles that year were equipped with a sophisticated electronic climate control system developed by Chrysler Corporation for use in their top models. The system turned on the heater, air conditioner or both, depending on the thermostat's setting and ambient temperature, automatically maintaining whatever temperature the driver selected. The compressor was an American import as well, supplied by the Harrison division of General Motors.

Far more modern than the contemporary Cadillac, which still had a live rear axle, and both faster and larger inside than the either the Rolls-Royce or Cadillac, the 6.9 was indistinguishable from its W116 stablemates save for a modest "6.9" badge on the decklid and wider tires.[2] US models also had different bumper rubbers fitted to the "park bench" impact absorbing bumpers. As discreet as the badge was, it could be deleted/ordered with option 261 omission of the displacement figure on the trunk lid at extra cost for those who wanted to avoid attention either from drivers of other high-performance cars or from law enforcement. In the words of David E. Davis, the 6.9 was "a $50,000 exercise in going fast."

Still, for fans of the discontinued 6.3 or for those who simply had to have a car which Car and Driver proclaimed to be "the greatest Mercedes-Benz ever built," it seemed that money was no object. At its launch in 1975, the 450SEL 6.9 cost DM 69,930. In the last year of production, 1979, the car was available at a price of DM 81,247. Even though this was far from inexpensive, the courage of the Mercedes-Benz strategists in launching the car onto the market paid off. A total of 7,380 units were built by 1980, and most of these were exported to the USA. This volume figure looks rather small at first glance, but production figures tend to be significantly smaller in the top luxury segment where this model competes. Also, the 6.9 was not the only S-Class model, and was purchased by the rich, the famous, and the powerful despite the rising cost of gasoline brought on by the Arab oil embargo. Thus, the 7,380 total sales volume is quite respectable once the price and contemporary economic climate are taken into account.

In a poll conducted by Britain's Classic & Sports Car magazine and printed in their April 1999 edition, the Mercedes-Benz 6.9 ranked fourth on their list of the "world's greatest saloons." [3] The May 2004 edition of another British publication, Mercedes Enthusiast magazine, ranked the 6.9 number fifteen on their all-time top twenty list of great Mercedes-Benz automobiles. Even with such accolades, a 6.9 is a reasonably priced collectible automobile despite its rarity. The online NADA Used Car Guide lists a top value of US$20,000. At present, the market for cars of this type is somewhat soft, and a prime example can be had for considerably less. As is often the case with older cars that contain exotic engineering and parts unique to that one model, however, running and maintenance costs for a 6.9 can quickly overshadow a low initial purchase price.