Dasven Patshah Da Granth (Punjabi: ਦਸਵੇ ਪਾਤਸ਼ਾਹ ਦਾ ਗ੍ਰੰਥ, "Book of the Tenth Emperor") or Dasam Granth (Punjabi: ਦਸਮ ਗ੍ਰੰਥ), often called Sri Dasam Granth Sahib with respect, is a scripture of Sikhism, containing some of the texts attributed to 10th Sikh Guru, Guru Gobind Singh. Although the Dasam Granth is commonly confused with the Guru Granth Sahib, there is no overlap in content between them.[1] W. H. McLeod has noted that while the Guru Granth Sahib has a religious focus on "liberation through meditation" the Dasam Granth's focus has "little to do with religious belief".[1] Some compositions of the Dasam Granth like Jaap Sahib, Amrit Savaiye, and Benti Chaupai are part of daily prayers Nitnem of the Sikhs. These compositions are also part of Sikh baptism (Khanda di Pahul). It is written in the Braj Bhasha language with the Gurmukhi script.

There are three major views on the authorship of the Dasam Granth:[2]

In his religious court at Anandpur Sahib, Guru Gobind Singh had employed 52 poets, who translated several classical texts into Braj Bhasha. Most of the writing compiled at Anandpur Sahib was lost while the Guru's camp was crossing the Sirsa river before the Battle of Chamkaur. Later, Bhai Mani Singh compiled all the available works under the title Dasam Granth. The traditional scholars claim that all the works in Dasam Granth were composed by the Guru himself, on the basis of Bhai Mani Singh's letter. However, a number of scholars dispute this claim, saying that the some of the compositions included in Dasam Granth (such as Charitropakhyan) are out of tune with other Sikh scriptures, and must have been composed by other poets.[2][3]

The Dasam Granth has 1428 pages and contains Jaap Sahib, the Akal Ustat or praise of the Creator, the Bachitar Natak or Wonderful Drama, in which gives an account of his parentage, his divine mission, and the battles in which he had been engaged.

Then follow the Gyan Parbodh, or awakening of knowledge; the Shabad Hazare; quatrains called Sawaiyas, which are religious hymns in praise of God and reprobation of idolatry and hypocrisy; the Shastar Nam Mala, a list of offensive and defensive weapons used in the Guru's time, with special reference to the attributes of the Creator; the Kabiovach Bainti Chaupai will "absolve the suffering, pain or fear of the person, who will even once recite this Bani"; the Zafarnamah, containing the tenth Guru's epistle to the emperor Aurangzeb; and Hikayats, several metrical tales in the Persian language.

The Contents of the Dasam Granth are:

The Dasam Granth is written in rhymed poetry. It was designed to be heard, so there is considerable repetition, and a variety of meters to hold the attention. The language of most of the Dasam Granth is largely Braj Bhasha veering towards Sanskrit at one extreme and simple colloquial Hindi at the other, although conventional Hindi is used marginally. The Braj dialect is a variety of medieval Hindi with a mixture of Sanskrit and Arabic words. The Zafarnamah and the Hikayats are in Persian using Gurmukhi characters and several passages in other works are in Punjabi. The 'author(s)' not only used this melange of languages but also coined words half Arabic half Sanskrit (and sometimes words without any meaning just to create a musical effect). Some of this kind of writing has great power and beauty.

From A Short History of the Sikhs, Ganda Singh & Teja Singh:

"In Hindi he developed a style, which for martial cadence, variety of form and richness of imagination...has remained unsurpassed since his times. In lines ranging from monosyllabic verse to long and multiplied swayyas and kabits, we seem to hear the torrential flow of hill streams or the galloping sweep of cavalry on the march. His intellect quivers in emotion and breaks out against superstition and hypocrisy into humour, irony or banter. His emotion...is raised to the highest pitch of ecstasy when he communes with God."

"This Granth is very difficult, and is composed in the Gurmukhi dialect in several kinds of verses. In it there is the description of several weapons of warfare, the rules of warfare, the shortcomings in the character of men and women, and some information on worship and religious knowledge. The descriptions of scenes of battle are couched in extremely vigorous staccato rhyme often reduced to lines of one word each. The battles waged by Chandi encounters with the hill chiefs at Bhangani and Nadaun are among the most stirring that exist. 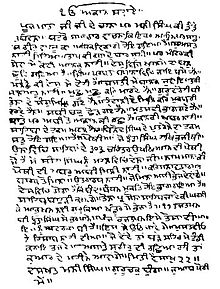 Giani Gian Singh claims that the full copy of the Dasam Granth was in possession of the Budha Dal, an 18th century Sikh army, at the Battle of Kup and was lost during the Second Sikh Holocaust (1762)[9]

The earliest surviving full manuscript of the Dasam Granth dates to 1713,[8] although it appears not to have been publicly available. In 1721, Mata Sundri commissioned Bhai Mani Singh with compiling a volume of the Dasam Granth.[10] He completed his manuscript after collecting and sifting through material collected from a number of Sikhs. "Minor textual variation" exist between the early manuscripts.[8] During the 1890s the text was standardized into its current two-volume 1,428 page print version.[8]