List of ethnic groups in China
For the subgroups, see Han Chinese subgroups. 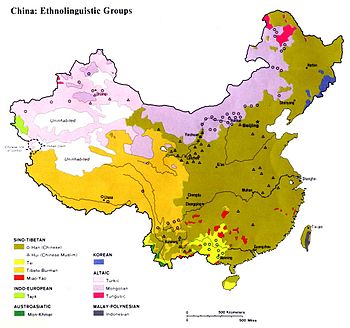 The Han Chinese are the largest ethnic group, where some 91.59% [1] of the population was classified as Han Chinese (~1.2 billion). Besides the majority Han Chinese, 55 other ethnic groups are recognised in mainland China by the PRC government, numbering approximately 105 million people, mostly concentrated in the northwest, north, northeast, south, and southwest but with some in central interior areas.

AGB 3304－91 "Names of nationalities of China in romanization with codes".[3]
Bthe population only includes China and the Republic of China (Taiwan)
1also includes Utsuls of Hainan, descended from Cham refugees
2a subset of which is also known as Hmong
3including Amdowa and Khampa
4this category includes several different Tai-speaking groups historically referred to as Bai-yi
5a collective name for all Taiwanese aborigine groups in Taiwan
6also included are the zh:摩梭; Mósuō
7known as Kachin in Myanmar
8The same group as Vietnamese or Kinh in Sino-Vietnamese and historically referred to as 越 Yuè, cognate to Vietnamese Việt. See Bǎiyuè.
9the same group as Nanai on the Russian side of the border

Poster showing the 56 ethnic groups of China in Beijing

This is a list of ethnic groups in China that are not officially recognized by the government of the People's Republic of China.