Charles William "Chic" Harley (September 15, 1894 – April 21, 1974) was one of the outstanding American football players of the first half of the 20th century and the player who first brought the Ohio State University football program to national attention. Harley was Ohio State's first consensus first-team All-America selection and first three-time All-America selection. In 1951, he became a charter inductee in the College Football Hall of Fame.

In 1941, James Thurber described Harley's running skills for the New York City newspaper, PM, "If you never saw him run with a football, we can't describe it to you. It wasn't like Red Grange or Tom Harmon or anybody else. It was kind of a cross between music and cannon fire, and it brought your heart up under your ears."[1]

Charles Harley was born in Chicago, Illinois, hence the source of the nickname Chic, but his family moved to Columbus, Ohio when he was 12 years old. There Harley attended East High School. The family was to return to Chicago just before Harley's senior year, but the Columbus East principal convinced the family to let Harley stay for his final year. In his career at East High School, Harley's team lost only one game, his last. So many people wanted to see Harley play that many times football games at East High's now-named "Harley Field" outdrew Ohio State football games.

Harley was recruited to attend Ohio State by the university's chapter of the Phi Gamma Delta fraternity, the fraternity he joined upon his arrival on campus.[2] Harley began his career with the Ohio State Buckeyes in 1916. He led the team to a 7–0 record and their first Big Ten Conference championship. The team scored 258 points in seven games and giving up only 29. The key games of the season were a 7–6 victory over the University of Illinois and a 14–13 victory over the University of Wisconsin–Madison, teams that were at the time the conference's dominant powers. In both games the margin of victory was a point after touchdown kicked by Harley. Following the season, Harley was named as a consensus first-team All-America selection, including a spot on Walter Camp's authoritative list. 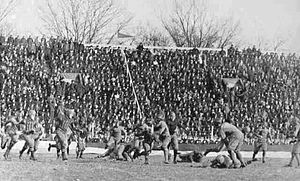 The Buckeyes repeated as conference champion in 1917 with an 8–0–1 record, and Harley repeated as a consensus first-team All American. In 1918 Harley left school to be a pilot in the United States Army Air Service during World War I, but he returned the following year. In 1919 the Buckeyes finished 6–1. Harley's only career loss was a heartbreaker; the team lost the game and the conference title to the University of Illinois on the last play of the last game of the season. That season, however, is remembered at Ohio State for the Buckeyes' first victory over the University of Michigan. Following that senior season, Harley was again a consensus first-team All-America selection.

Throughout his Ohio State career, Harley played right halfback on offense and safety on defense, and was also the team's punter and place kicker. He scored 201 points in a 23-game career. This total was the school's individual scoring record until Harley was surpassed by Howard "Hopalong" Cassady in 1955. Harley's 8.74 points per game remains a school record. Harley also holds the team record for interceptions in a game: he picked off four passes in the 1919 game against the University of Michigan.

In 1950, Harley was voted a first-team halfback on the Associated Press college football All-Star team for the first half of the 20th century. The other first-team halfback was Jim Thorpe. Red Grange was voted to the second team. When asked to explain his vote, one writer said, "Red Grange was a great runner, but that's all he was. Chic Harley was a great runner, a great passer, a great kicker and a great defensive back. That's why he's on my first-team."[3] In 1951 Harley was one of 44 players and coaches selected as the charter members of the College Football Hall of Fame.

In Harley's era, the Buckeyes played in Ohio Field, which had a seating capacity of no more than 20,000. Harley so excited the fans of Ohio State football that he inspired a $1.3 million funding drive, starting in 1920, to build the massive Ohio Stadium. For this reason Ohio Stadium, where the Buckeyes still play, is sometimes called "The House That Harley Built".[4]

In addition to his football exploits, Harley also lettered in baseball, basketball, and track. He was an outfielder in baseball, a guard in basketball, and a sprinter in track. Harley was a member of the 1917 Big Ten baseball championship team. On the track field, Harley set a conference record in the 50-yard dash.[5]

Following his college playing career, Harley was contacted by George Halas to play for the NFL team Halas was organizing, a team that would ultimately become the Chicago Bears. Harley's brother, Bill Harley, negotiated a contract that was to give Chic Harley one-third ownership of the team. However, that contract was voided when a physical revealed health impairments resultant from Harley's time in the war. At the time he was diagnosed with Dementia praecox, a chronic, deteriorating psychotic disorder characterized by rapid cognitive disintegration, usually beginning in the late teens or early adulthood."[6] Harley ultimately became hospitalized at the Veteran's Administration Hospital in Danville, Illinois, where he would be a patient for the remainder of his life.

Harley returned to Columbus in 1949 for a tribute at Ohio Stadium. The Ohio State University Marching Band adapted their famous "Script Ohio" formation to spell out the name "Chic." That performance remains the only time that the formation has been altered. Harley died in 1974 at the age of 78. His pallbearers were contemporary Ohio State football players, including Archie Griffin and Neal Colzie.

Harley was among the first induction class of the Ohio State Varsity O Hall of Fame in 1977.

Ohio State began honoring players by retiring their numbers in 1999. Jersey numbers were more fluid in Harley's era, changing from game to game, but the University decided to honor Harley by retiring the final number he wore for Ohio State, #47.[7] The ceremony was held at halftime of a game on October 30, 2004. Ironically, that number was worn by Harley in the only collegiate game he lost. Many believe it would have been more appropriate to retire #10, which was the number Harley wore while defeating Michigan.

To this day, East High School still plays on the same field that Harley played on in the 1910s, which has been named Harley Field in his honor.

The Chic Harley Award is presented by the Touchdown Club of Columbus to the College Football Player of the Year.