Stanhope was born in Gundagai, New South Wales. One of nine children of schoolteacher parents,[1] much of his junior education was spent at one-teacher schools in country NSW.[1] He attended Mullumbimby Public School[citation needed] and Bega High School[citation needed] before coming to Canberra to undertake studies at the Australian National University, graduating as a Bachelor of Laws.[1]

Between 1979 and 1987, Stanhope held a range of community roles including:

Between 1987 and 1991, Stanhope was Secretary of the House of Representatives Standing Committee on Legal and Constitutional Affairs;[1] and between 1991 and 1993, Deputy administrator and official secretary of Norfolk Island.[1] From 1993 to 1996, Stanhope worked as Senior Adviser and Chief of Staff for the Federal Attorney-General, Michael Lavarch, and between 1996 and 1998, advised the then Federal Opposition Leader, Kim Beazley on native title.[1]

Stanhope was elected to the ACT Legislative Assembly representing the Ginninderra electorate at the 1998 ACT general election and was immediately elected Opposition Leader by the Labor caucus.[5]

On 13 January 2003, Stanhope helped rescue a helicopter pilot who had crashed in a dam during a firefighting operation. Stanhope, who was in a second helicopter with crew and the ACT head of the bushfire services, Peter Lucas-Smith, had responded to the stricken pilot's Mayday call. The man had suffered serious head injuries and was taken to the Canberra Hospital in a critical condition. After the rescue Stanhope praised the emergency services: "It provided to me a very stark awareness of the enormous risks that many in our community take, the extent to which so many people put their lives on their line to ensure the protection of our communities".[7]

Canberra was hit by bushfires in January 2003. Four people died and 500 houses were destroyed. Stanhope faced a no-confidence motion in the Assembly from the Liberal opposition, which if passed meant he would have been forced to resign as Chief Minister. Instead, the motion was downgraded to a censure motion by the combined vote of the ALP and the Democrats and passed in the Assembly. The coronial inquest into the bushfire was released in mid-December 2006, and found significant bureaucratic failings contributed to the devastation, although it also claimed shortcomings at a political level.[8]

At the 2004 ACT general election, Stanhope led the Labor Party to win sufficient seats to form a majority government, the first such government in the Territory's history.[1]

As Chief Minister, he introduced a Human Rights Act, in 2004, the first jurisdiction in Australia to do so.[1] In 2005, Stanhope published the confidential draft of the Federal Anti-Terrorism Bill 2005 on his website.[9] Citing concerns about the removal of basic human rights, Stanhope later refused to sign a revised version of the legislation, becoming the only state or territory leader to do so.[1][10]

In June 2006 Stanhope came under fire over the 2006–07 ACT Budget which was crafted to address ongoing budget deficits. The budget included massive rate rises, across the board fee hikes, a change in the ACT's emergency services management and the proposed closure of 38 schools and colleges through consolidation. The budget outcome led to ratings agency Standard & Poor's having to add qualification before reaffirming the ACT's AAA credit rating. Additionally the decision regarding distribution of the education budget prompted outcry in one Australian newspaper, with the Sydney-based Daily Telegraph labelling him "Stanhope-less" and an "economic vandal" on the front page of a special ACT edition.[citation needed]

Soon after the budget the ACT's Civil Unions Act, to allow formal recognition of same-sex relationships, was overturned by the Federal Howard government despite the objections of the ACT Government and its federal senators.[11][12] The Rudd government had advised it is not Labor policy to stifle state legislation, and that it would not block attempts by the ACT government on this issue.[13][14] Despite this, the Rudd Government later threatened to override any laws introduced in the ACT that legislated for same-sex ceremonies.[15] As a result, the Stanhope Government removed provisions for ceremonies in its proposal, and ultimately allowed for civil partnerships that did not include legislated ceremonies. The Stanhope Government reported that the number of new civil partnerships entered in to "exceeded expectations".[16] 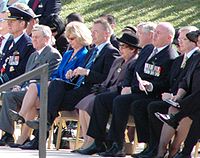 At the 2008 ACT general election, Stanhope led the Labor Party to win sufficient seats to form a minority government, again with a hung parliament.[18][19] After almost two weeks of deliberations, the Greens chose to support a minority Labor government.[20]

On 9 May 2011, Stanhope announced his intention to resign as Chief Minister and as a member for Ginninderra.[21][22] He formally resigned as Chief Minister on 12 May, and as a Member of the Legislative Assembly on 16 May 2011.[3][4] The casual vacancy in the Assembly, caused by Stanhope's resignation, was filled by Chris Bourke.[23]

Stanhope accepted a professorial fellowship in the Australia and New Zealand School of Government, based at the University of Canberra, commencing in August 2011.[24]