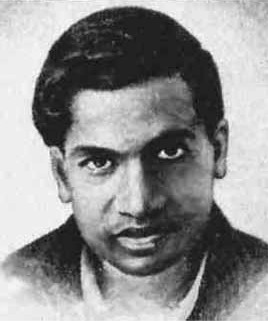 Born and raised in , , India, Ramanujan first encountered formal mathematics at age ten. He demonstrated a natural ability, and was given books on advanced by S. L. Loney. [cite book |last=Berndt |first=Bruce C. |title= Ramanujan: Essays and Surveys|year= 2001 |publisher= |location=Providence, Rhode Island|isbn= 0-8218-2624-7 | pages=p9] He had mastered them by age thirteen, and even discovered theorems of his own. He demonstrated unusual mathematical skills at school, winning accolades and awards. By the age of seventeen, he was conducting his own mathematical research on s and the . He received a scholarship to study at Government College in , but lost it when he failed his non-mathematical coursework. He joined another college to pursue independent mathematical research, working as a clerk in the Accountant-General's office at the Madras Port Trust Office to support himself. In 1912-1913, he sent samples of his theorems to three academicians at the . Only recognized the brilliance of his work, and he asked Ramanujan to study under him at Cambridge.

Ramanujan independently compiled nearly 3900 results (mostly identities and s) during his short lifetime. [cite book |last=Berndt |first=Bruce C. |title= Ramanujan's Notebooks Part V|year= 2005 |publisher= SpringerLink |isbn= 0-387-94941-0 | pages=p4] Although a small number of these results were actually false and some were already known, most of his claims have now been proven to be correct. [cite journal |year=1999 |month=August |title=Rediscovering Ramanujan |journal= Frontline|volume=16 |issue=17 |pages=650|url=http://www.hinduonnet.com/fline/fl1617/16170810.htm |accessdate=2007-06-23 ] He stated results that were both original and highly unconventional, such as the and the , and these have inspired a vast amount of further research. [cite journal |last=Ono |first= Ken|authorlink=Ken Ono |year=2006 |month=June-July |title=Honoring a Gift from Kumbakonam |journal= |volume=53 |issue=6 |pages=650|url=http://www.ams.org/notices/200606/fea-ono.pdf |accessdate=2007-06-23 |doi=10.2307/2589114 ] However, some of his major discoveries have been rather slow to enter the mathematical mainstream. Recently, Ramanujan's formulae have found applications in the field of and in . The "Ramanujan Journal", an international publication, was launched to publish work in all the areas of mathematics that were influenced by his work. [cite book | last=Alladi | first=Krishnaswami | title=Analytic and Elementary Number Theory: A Tribute to Mathematical Legend Paul Erdös| publisher=Kluwer Academic Publishers | location=Norwell, Massachusetts | year = 1998|isbn=0-7923-8273-0 | pages=p6 ]

Ramanujan was born on 22 December 1887 in , , India, at the place of residence of his maternal grandparents. [cite book | last=Kanigel | first=Robert | title=| publisher= | location=New York | year = 1991|isbn=0-684-19259-4 | pages=p11 ] His father, K. Srinivasa Iyengar worked as a clerk in a sari shop and hailed from the district of . [Kanigel (1991), p17-18.] His mother, Komalatammal or Komal Ammal ( Ammal in Tamil is equivalent of Madam in English or Frau in German) was a housewife and also a singer at a local temple. They lived in Sarangapani Street in a south-Indian-style home (now a museum) in the town of Kumbakonam. When Ramanujan was a year and a half old, his mother gave birth to a son named Sadagopan. The newborn died less than three months later. In December 1889, Ramanujan had and fortunately recovered, unlike the thousands in the who had succumbed to the disease that year.

Since Ramanujan's father was at work most of the day, his mother took care of him as a child. He had a close relationship with her. From her, he learned about tradition and . He learned to sing religious songs, to attend pujas at the temple and eating habits – all of which were necessary for Ramanujan to be a good child. [Kanigel (1991), p20.] At the Kangayan Primary School, Ramanujan performed well. Just before the age of ten, in November 1897, he passed his primary examinations in English, Tamil, and . With his scores, he finished first in the district. [Kanigel (1991), p25.] In 1898, his mother gave birth to a healthy boy named Lakshmi Narasimhan. That year, Ramanujan entered Town Higher Secondary School where he encountered formal mathematics for the first time. [Kanigel (1991), p25.]

By age eleven, he had exhausted the mathematical knowledge of two college students, who were lodgers at his home. He was later lent a book on advanced trigonometry written by S.L. Loney. [cite book | last=Hardy | first=G. H. |authorlinks=| title=Ramanujan: Twelve Lectures on Subjects Suggested by His Life and Work| publisher= | location=Providence, Rhode Island | year = 1999|isbn=0-8218-2023-0 | pages=p2 ] [cite book | last=Berndt | first=Bruce C. |authorlinks=|coauthors=Robert A. Rankin| title=Ramanujan: Essays and Surveys| publisher= | location=Providence, Rhode Island | year = 2001|isbn=0-8218-2624-7 | pages=p9 ] He completely mastered this book by the age of thirteen and he discovered sophisticated theorems on his own. By fourteen, he achieved merit certificates and academic awards throughout his school career and also assisted the school in the of assigning its 1200 students (each with their own needs) to its 35-odd teachers.

When he graduated from Town High in 1904, Ramanujan was awarded the K. Ranganatha Rao prize for mathematics by the school's headmaster, Krishnaswami Iyer. Iyer introduced Ramanujan as an outstanding student who deserved scores higher than the maximum possible marks. He received a scholarship to study at Government College in , [Kanigel (1991), p28.] known as the "Cambridge of South India." [Kanigel (1991), p45.] However, Ramanujan was so intent on studying mathematics that he could not focus on any other subjects and failed most of them, losing his scholarship in the process. [Kanigel (1991), p47.] In August 1905, he ran away from home, heading towards . [Kanigel (1991), p48-49.] He later enrolled at in Madras. He again excelled in mathematics, but performed poorly in other subjects such as . Ramanujan failed his F. A. degree exam in December 1906 and again a year later. Without a degree, he left college and continued to pursue independent research in mathematics. At this point in his life, he lived in extreme poverty and was often near the point of . [Kanigel (1991), p55-56.]

On 14 July 1909, Ramanujan was married to a nine-year old bride, Janaki Ammal. [Kanigel (1991), p71.] It is important to note that in this particular sect that Ramanujan belonged to, marriage was a formal engagement that was actually consummated only after the bride turned 17-18, as per the traditional calendar. After the marriage, Ramanujan developed a , an abnormal swelling of the , an internal membrane in the testicle. [Kanigel (1991), p72.] The condition could be treated with a routine surgical operation that would release the blocked fluid in the scrotal sac. His family did not have the money for the operation, but in January 1910, a doctor volunteered to do the surgery for free. [cite book |last=Ramanujan|first=Srinivasa|editor = P. K. Srinivasan |title= Ramanujan Memorial Number: Letters and Reminiscences |year= 1968|publisher= Muthialpet High School |location=Madras|isbn= | pages=Vol. 1, p100] After his successful surgery, Ramanujan searched for a job. He stayed at friends' houses while he was travelling door to door around the city of Madras (now Chennai) looking for a clerical position. To make some money, he tutored some students at Presidency College who were preparing for their F. A. exam. [Kanigel (1991), p73.] In late 1910, Ramanujan was sick again, possibly as a result of the surgery earlier in the year. He was fearful for his health, and he even told his friend, R. Radakrishna Iyer, to "hand these [my mathematical notebooks] over to Professor Singaravelu Mudaliar [mathematics professor at Pachaiyappa's College] or to the British professor Edward B. Ross, of the ." [Kanigel (1991), p74-75.] After Ramanujan recovered and got back his notebooks from Iyer, he took a northbound train from Kumbakonam to Villupuram, a coastal city under French control. [cite book |last=Ranganathan|first=S. R. |title=Ramanujan: The Man and the Mathematician |year= 1967|publisher=Asia Publishing House |location=Bombay|isbn= | pages=p23] [Srinivasan (1968), Vol. 1, p99.]

Getting noticed by mathematicians

I was struck by the extraordinary mathematical results contained in it [the notebooks] . I had no mind to smother his genius by an appointment in the lowest rungs of the revenue department." [Srinivasan (1968), Vol. 1, p129.]

Iyer sent Ramanujan, with introduction letters, to his mathematical friends in Madras. Some of these friends looked at his work and gave him letters of introduction to R. Ramachandra Rao, the district collector for and the secretary of the Indian Mathematical Society. [Srinivasan (1968), Vol. 1, p86.] [cite journal |last=Neville |first=Eric Harold |year=1921|month=January |title=The Late Srinivasa Ramanujan |journal=Nature|volume=106 |issue=2673 |pages=661–662 |accessdate= 2007-06-29 |doi=10.1038/106661b0 ] [Ranganathan (1967), p24.] Ramachandra Rao impressed by Ramanujan's work, but was doubtful that it was actually his own work. Ramanujan mentioned a correspondence he had with Professor Saldhana, a notable Bombay (now ) mathematician, in which Saldhana expressed a lack of understanding for his work, but concluded that he was not a phony.