The Vermilion bird is one of the Four Symbols of the Chinese constellations. According to Wu Xing, the Taoist five-elemental system, it represents the fire-element, the direction south, and the season summer correspondingly. Thus it is sometimes called the Vermilion bird of the South (南方朱雀, Nán Fāng Zhū Què). It is known as Zhuque in Chinese, Suzaku in Japanese, Jujak in Korean and Chu Tước in Vietnamese. It is often mistaken for the Fenghuang due to similarities in appearance, but the two are different creatures.[citation needed] The Fenghuang (similar to the phoenix in western mythologies) are legendary ruler of birds associated with the Chinese Empress in the same way the dragon is associated with the Emperor, while the Vermilion Bird is a mythological spirit creature of the Chinese constellations.

The Seven Mansions of the Vermilion Bird

As the other three Symbols, there are seven "mansions", or positions, of the moon within Vermilion Bird. The names and determinative stars are:[1][2]

Nature of the symbol 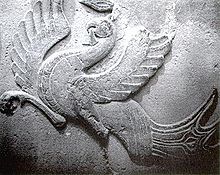 The Vermilion bird is an elegant and noble bird in both appearance and behavior, it is very selective in what it eats and where it perches, with its feathers in many different hues of reddish orange.