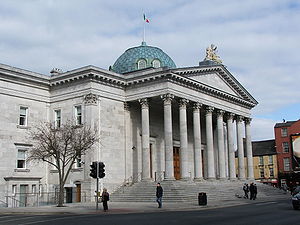 The courthouse on Washington Street in Cork, home of the Cork Circuit Court

The Circuit Court consists of a President and thirty-three ordinary judges. It is composed of eight circuits, each of which cover an ad hoc region of the state.

The Irish constitution permits the creation of courts of "local and limited jurisdiction". The local nature of the Circuit Court exists in the manner in which each circuit of the court only has jurisdiction to consider matters arising within its assigned county or counties. And the limited nature occurs in the manner in which it can only adjudicate over matters which are expressly indicated to be within its jurisdiction by statute.

The civil jurisdiction of the Circuit court is limited to a compensation claim not exceeding €38,092 and for actions involving real property with a rateable value of less than €254, although the parties in an legal action can agree to lifting these limits by agreeing to unlimited jurisdiction. Divorce and judicial separation, and contentious probate cases can also heard provided that the value of any real property in a settlement is within the jurisdiction of the court. Unlike the District Court and in common with the High Court, the Circuit Court has a full equitable jurisdiction.

Civil matters heard in the Circuit Court can be appealed to the High Court.

The Court tries all indictable offences (i.e. those triable by a judge and jury) with the exception of certain offences (murder, aggravated murder, treason, rape, piracy and genocide) that are reserved for the Central Criminal Court. Terrorist offences and offences with an organised crime element can be heard by the non-jury Special Criminal Court.

Decisions of the Circuit Court in criminal matters can be appealed to the Court of Criminal Appeal.

The President of Circuit Court

The office of the President of the Circuit Court was established under the Courts of Justice Act 1947. The current president is his Honour Judge Matthew Deery who was appointed in 2005. His predecessors were: