Hainosaurus is an extinct genus of marine lizard belonging to the mosasaur family. It was one of the largest mosasaurs, though its size has been revised more than once. At first it was estimated to be 17 metres (56 ft), and the largest mosasaurid.[1] During the 1990s, its size was revised to 15 metres (49 ft) long;[2] more recently, Johan Lindgren estimated that it reached lengths of up to 12.2 metres (40 ft).[3] It was one of the top marine predators of the Late Cretaceous. These animals may have preyed on turtles, mosasaurs, plesiosaurs, pterosaurs, cephalopods, sharks and fish. 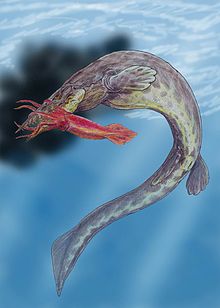 Hainosaurus was a member of the Tylosaurinae, and it was related to the wholly North American Tylosaurus. However, it had more vertebrae from the neck to the part of the tail with chevrons (53) than Tylosaurus (35).[citation needed] Both genera are large marine superpredators. Hainosaurus' tail has less chevron-bearing vertebrae, making it shorter than that of Tylosaurus. The only known and type species of Hainosaurus is H. bernardi, named after Belgian naturalist Leopold Bernard.