The Orange Line of the Washington Metro consists of 26 rapid transit stations from Vienna to New Carrollton. It has stations in Fairfax County and Arlington, Virginia, the District of Columbia, and Prince George's County, Maryland. Half of the line's stations are shared with the Blue Line, and over two thirds will be shared with the Silver Line. Orange Line service began on November 20, 1978.

Planning for Metro began with the Mass Transportation Survey in 1955 which attempted to forecast both freeway and mass transit systems sufficient to meet the needs of transportation in 1980.[2] In 1959, the study's final report included two rapid transit lines which anticipated subways in downtown Washington.[3] Because the plan called for extensive freeway construction within the District of Columbia, alarmed residents lobbied for federal legislation creating a moratorium on freeway construction through July 1, 1962.[4] The National Capital Transportation Agency's 1962 Transportation in the National Capital Region report anticipated much of the present Orange Line route in Virginia with the route following the median strip of I-66 both inside Arlington and beyond.[5] The route continued in rapid transit plans until the formation of the Washington Metropolitan Area Transit Authority (WMATA).

With the formation of WMATA in October 1966, planning of the system shifted from federal hands to a regional body with representatives of the District, Maryland and Virginia. Congressional route approval was no longer a key consideration.[6] Instead, routes had to serve each local suburban jurisdiction to assure that they would approve bond referenda to finance the system.[7] Because the least expensive way to build into the suburbs was to rely upon existing railroad right-of-ways, the Orange Line took much of its present form, except that it also featured a further extension along the railroad to Bowie, Maryland and along the Dulles Access Road to the Dulles Airport.[8] By 1966, WMATA and Arlington County planners had agreed "to realign the rapid transit through high-density commercial-office-apartment areas in the vicinity of Wilson Boulevard instead of the freeway's median between the river and Glebe Road."[9]

On March 1, 1968, WMATA approved its Adopted Regional System (ARS) plan that included suburban mass transit lines that followed the median of the proposed Interstate 66 through Virginia to Vienna and the CSX/Amtrak railroad right-of-way in Prince George's County, Maryland.[10] The construction of the downtown Washington sections of the Orange and Blue lines began simultaneously with the Red line. A joint ground breaking ceremony was held on December 9, 1969.[10] Service on the joint downtown track was at first branded as just the Blue Line and commenced on July 1, 1977.[10]

In 1976, Robert Patricelli, federal Urban Mass Transportation Administrator, ordered Metro to conduct an alternatives analysis of the portion of its system that was not already under contract.[11] Because the Tysons Corner area of Fairfax County had developed significantly since the ARS was adopted in 1968, the analysis considered rerouting the Orange line to serve Tysons Corner at an additional cost of $60 million. However, because environmental impact statements had already been completed for the Vienna route, a change in the route would result in a five year delay in the construction of the Orange Line west of Ballston. This prompted the City of Falls Church to sue WMATA for breach of contract. In the end, WMATA kept the Vienna route in tact, leaving Tysons Corner without Metrorail service until 2013.[12][13]

Service on the Orange Line began on November 20, 1978 between National Airport and New Carrollton, with five new stations being added to the existing network from Stadium–Armory. When the line from Rosslyn to Ballston–MU was completed on December 11, 1979, Orange Line trains began following this route rather than going to the National Airport station. The line was completed on June 7, 1986, when it was extended by four stations to Vienna in the median of I-66.[10]

On January 13, 1982, an Orange Line train derailed as it was being backed-up from an improperly closed rail switch between the Federal Triangle and Smithsonian stations, resulting in the deaths of three passengers.[14] It was the first incident within the Metro system that caused a fatality,[14] and the deadliest incident occurring in the system until the 2009 collision that resulted in nine fatalities.[15]

Starting at its western termini at the Vienna/Fairfax-GMU station in Virginia, the tracks run on the median strip of Interstate 66 until they enter a tunnel under Fairfax Drive just before the Ballston-MU station.[16] Although originally proposed to follow I-66 through Arlington, city planners successfully argued that the line be relocated to Fairfax Drive, which has since stimulated high rise development along the line's route. At the Clarendon station, the tunnel shifts to Wilson Blvd. and 16th Street North.[16] The tunnel then turns north and merges with the Blue Line just before entering the Rossyln station which is located under North Lynn Street.[16] The tunnel continues under the Potomac River and bends to the east to travel under I Street NW in the District of Columbia.[16] 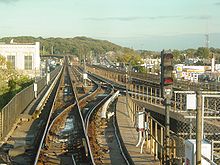 The tunnel continues east under I Street and between the Farragut West and McPherson Square stations there is a non-revenue branch track that connect with the Red Line. The tunnel then turns south under 12th Street Northwest and enters the lower level of the Metro Center station.[16] After the Smithsonian station, the tunnel turns east under D Street Southwest and then southeast under Pennsylvania Avenue Southeast.[16] At the Potomac Avenue station, the tunnel briefly travels under G Street Southeast and then turns northwest under Potomac Avenue with a turn to the north to travel under 19th Street Southeast for the Stadium-Armory station.[16] The tunnel then travels under the RFK Stadium parking lots to surface near Benning Road.[16] The elevated tracks follow Benning Road across the Anacostia River and then split from the Blue Line. At this point, a pocket rail will be used as the eastern terminus of the Silver Line.[16]

The above ground tracks continue along DC Route 295 between the Minnesota Avenue and Deanwood stations and then follow the CSX/Amtrak railroad in Prince Georges County, Maryland until the eastern terminus at New Carrolton.[16] The route includes a train yard adjacent to the East Falls Church station.[17] Orange Line service travels along the entirety of the K Route (from the terminus at Vienna/Fairfax-GMU to the C & K junction just south of Rosslyn), part of the C Route (from the C & K junction just south of Rosslyn to Metro Center), and the entire D Route (from Metro Center to New Carrollton).[18]

The following stations are along the line, from west to east: 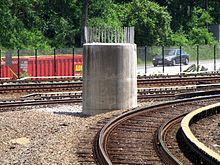 Unused bridge pier east of West Falls Church station, intended for use in connecting the Silver Line to the Orange Line.

The Virginia Department of Transportation (VDOT) announced on Jan. 18, 2008 that it and the Virginia Department of Rail and Public Transportation (VDPRT) had begun work on a draft environmental impact statement (EIS) for the I-66 corridor in Fairfax and Prince William counties. According to VDOT the EIS, officially named the I-66 Multimodal Transportation and Environment Study, would focus on improving mobility along I-66 from the Capital Beltway (I-495) interchange in Fairfax County to the interchange with U.S. Route 15 in Prince William County. The EIS also allegedly includes a four station extension of the Orange Line past Vienna. The extension would continue to run in the I-66 median and would have stations at Chain Bridge Road, Fair Oaks, Stringfellow Road and Centreville near Virginia Route 28 and U.S. Route 29.[20]

The Dulles Corridor Rapid Transit Project is building a 24-mile (39 km) system extension west from East Falls Church, linking Dulles International Airport and Loudoun County to the system. Other than the new service into Virginia, the Silver Line will operate on the same tracks and serve the same stations as the Orange Line from East Falls Church to Stadium Armory then the Blue Line towards Largo Town Center joins on the same track five stations after the joining of the future Silver Line and the Orange Line at Rosslyn. The Silver Line will terminate at Stadium–Armory, while the Orange line will continue to New Carrollton. Service has been interrupted at stations west of Ballston on designated weekends to accommodate the construction of the interconnection of the Silver Line with the existing Orange Line tracks.[21][22]

As a part of the Silver Line project, the train yard adjacent to the West Falls Church station on the Orange Line is being expanded, over the objections of local residents.[17][23] During 2011, older tracks along the Orange Line will be rehabilitated on the weekends.[24]