Leigh's disease, also known as Subacute Necrotizing Encephalomyelopathy (SNEM), is a rare neurometabolic disorder that affects the central nervous system. It is named after Denis Archibald Leigh, a British psychiatrist who first described the condition in 1951.[1] 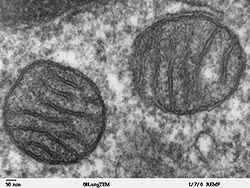 It is an inherited disorder that usually affects infants between the age of three months and two years, but, in rare cases, teenagers and adults as well. In the case of the disease, mutations in mitochondrial DNA (mtDNA) or in nuclear DNA (gene SURF1[2] and some COX assembly factors) cause degradation of motor skills and eventually death.

Mitochondria are an essential organelle in eukaryotic cells. Their function is to convert the potential energy of glucose, amino acids, and fatty acids into adenosine triphosphate (ATP). Mitochondria carry their own DNA, called mitochondrial DNA [mtDNA]. The information stored in the mtDNA is used to produce several of the enzymes essential to the production of ATP.

Mutations in the mtDNA can cause mitochondria to fail or to function improperly. In the case of Leigh's disease, crucial cells in the brain stem have mutated mtDNA, creating poorly functioning mitochondria. This causes a chronic lack of energy in the cells, which, in turn, affects the central nervous system and inhibits motor functions.

The disease is characterized by movement disorders. In one case review, 22 of 34 patients had evidence of a movement disorder. Dystonia, occurring in 19 patients, was the most common movement disorder. The dystonia was usually multifocal at onset and showed progression in six patients. Rigidity, tremor, chorea, hypokinesia, myoclonus, and tics were also noted (Macaya et al.). As it progresses rapidly, the earliest signs may be poor sucking ability and loss of head control and motor skills. Other symptoms include loss of appetite, vomiting, irritability, continuous crying (in infants), and seizures. A later sign can also be episodes of lactic acidosis, which can lead to impairment of respiratory and kidney function. Some children can present with loss of development skills or developmental regression and have often had investigations for failure to thrive. As the disease progresses in adults, it may also cause general weakness, kidney failure, and heart problems. Life expectancy is usually about a year within the onset of symptoms although both acute fulminating illness of a few days and prolonged survival have been reported.

Leigh's disease is an extremely rare disorder. There is currently no cure or effective treatment. A high-fat, low-carbohydrate diet may be recommended. Adults may have puffiness or swelling of the eye area and the hands. It is currently treated with thiamin (vitamin B1), but even with treatment, infants rarely live longer than two or three years after the onset of the disease. In cases of older people, the disease takes longer, but is still almost always fatal.