The striped bass is a typical member of the Moronidae family in shape, having a streamlined, silvery body marked with longitudinal dark stripes running from behind the gills to the base of the tail. Maximum size is 200 cm (6.6 ft) and maximum scientifically recorded weight 57 kg (125 US pounds). The average weight is 30 to 40 lbs. Striped bass are believed to live for up to 30 years. [1]

Striped bass are native to the Atlantic coastline of North America from the St. Lawrence River into the Gulf of Mexico to approximately Louisiana. They are anadromous fish that migrate between fresh and salt water. Spawning takes place in fresh water.

Introductions outside their natural range

The spawning success of striped bass has been studied in the San Francisco Bay-Delta water system, with a finding that high total dissolved solids (TDS) reduce spawning. At levels as low as 200 mg/L TDS there is an observable diminution of spawning productivity.[6] They can be found in lakes, ponds, streams and wetlands.

Former President of the United States George W. Bush, in Executive Order 13449 of October 20, 2007, designated the Striped Bass as a protected game fish. Further, he directed executive agencies to use existing legal authorities, to the extent possible, to prohibit the sale of Striped Bass caught in Federal waters in the Atlantic Ocean and Gulf of Mexico.[7] 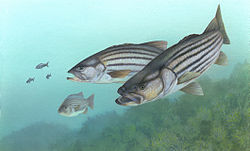 Illustration of a group of striped bass

Striped bass spawn in freshwater and although they have been successfully adapted to freshwater habitat, they naturally spend their adult lives in saltwater (i.e., it is anadromous). Four important bodies of water with breeding stocks of striped bass are: Chesapeake Bay, Massachusetts Bay/Cape Cod, Hudson River and Delaware River. It is believed that many of the rivers and tributaries that emptied into the Atlantic, had at one time, breeding stock of striped bass. One of the largest breeding areas is the Chesapeake Bay, where populations from Chesapeake and Delaware bays have intermingled.[8] There are very few successful spawning populations of freshwater striped bass, including Lake Texoma, the Colorado River and its reservoirs downstream from and including Lake Powell, and the Arkansas River as well as Lake Marion (South Carolina) that retained a landlocked breeding population when the dam was built; other freshwater fisheries must be restocked with hatchery-produced fish annually. Stocking of striped bass was discontinued at Lake Mead in 1973 once natural reproduction was verified.[9]

Hybrids with other bass

Striped bass have also been hybridized with white bass to produce hybrid striped bass also known as wiper. These hybrids have been stocked in many freshwater areas across the U.S.[10][11]

Striped bass caught in the Atlantic Ocean off the New Jersey coast.

Striped bass are of significant value as sport fishing, and have been introduced to many waterways outside their natural range. A variety of angling methods are used, including trolling and surfcasting top water lures are a good pick for surf casting. Striped bass will take a number of live and fresh baits including bunker, clams, sandworms, herring, bloodworms, mackerel with shad being the best bait for freshwater striper fishing. The largest striped bass ever caught by angling was a 35.6 kg (78.5 lb) specimen taken in Atlantic City, New Jersey on September 21, 1982.[12] The record-holder is Albert McReynolds, who fought the fish from the beach for an hour and twenty-minutes before landing it in the surf.[13]

Striped bass are an anadromous fish and their spawning ritual of traveling up rivers to spawn led some of them to become landlocked during lake dam constructions. It was once believed that the first area they became landlocked was in the Santee-Cooper river during the construction of the two dams that impounded Lake Moultrie and Lake Marion, and because of this belief the state game fish of South Carolina is the striped bass.[14]

Recently biologists believe that striped bass stayed in rivers for long periods of time, some not returning to sea unless temperature changes forced migration. Once fishermen and biologists caught on to rising striped bass populations, many state natural resources departments started stocking striped bass in local lakes. Striped bass still continue the natural spawn run in freshwater lakes, traveling up river and blocked at the next dam, which is why they are landlocked. Landlocked stripers have a hard time reproducing naturally, and one of the few and most successful rivers they have been documented reproducing successfully is the Coosa River in Alabama and Georgia.[15]

The Striped bass population declined to less than 5 million by 1982, but efforts by fishermen and management programs to rebuild the stock proved successful, and in 2007, there were nearly 56 million fish, including all ages. Recreational anglers and commercial fisherman caught an unprecedented 3.8 million fish in 2006. The management of the species includes size limits, commercial quotas, and biological reference points for the health of the species. The Atlantic States Marine Fisheries Commission states that Striped Bass are "Not overfished and overfishing is not occurring."[16]