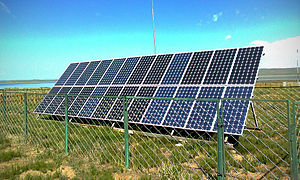 An installation of solar panels in rural Mongolia

A solar panel or photovoltaic module, is composed of individual PV cells. This crystalline-silicon panel has an aluminium frame and glass on the front.

A PV module on the ISS.

Because a single solar panel can produce only a limited amount of power, many installations contain several panels. A photovoltaic system typically includes an array of solar panels, an inverter, and sometimes a battery and interconnection wiring. 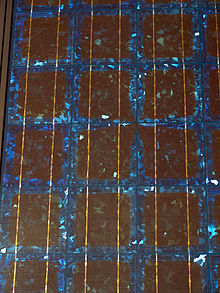 Polycrystalline PV cells connected together in a solar panel.

Solar panels use light energy (photons) from the sun to generate electricity through the photovoltaic effect. The structural (load carrying) member of a module can either be the top layer or the back layer. The majority of modules use wafer-based crystalline silicon cells or thin-film cells based on cadmium telluride or silicon. The conducting wires that take the current off the panels may contain silver, copper or other non-magnetic conductive transition metals.

The cells must be connected electrically to one another and to the rest of the system. Cells must also be protected from mechanical damage and moisture. Most solar panels are rigid, but semi-flexible ones are available, based on thin-film cells.

Electrical connections are made in series to achieve a desired output voltage and/or in parallel to provide a desired current capability.

Separate diodes may be needed to avoid reverse currents, in case of partial or total shading, and at night. The p-n junctions of mono-crystalline silicon cells may have adequate reverse current characteristics that these are not necessary. Reverse currents waste power and can also lead to overheating of shaded cells. Solar cells become less efficient at higher temperatures and installers try to provide good ventilation behind solar panels.[1]

Some recent solar panel designs include concentrators in which light is focused by lenses or mirrors onto an array of smaller cells. This enables the use of cells with a high cost per unit area (such as gallium arsenide) in a cost-effective way.[citation needed]

Depending on construction, photovoltaic panels can produce electricity from a range of frequencies of light, but usually cannot cover the entire solar range (specifically, ultraviolet, infrared and low or diffused light). Hence much of the incident sunlight energy is wasted by solar panels, and they can give far higher efficiencies if illuminated with monochromatic light. Therefore, another design concept is to split the light into different wavelength ranges and direct the beams onto different cells tuned to those ranges.[2] This has been projected to be capable of raising efficiency by 50%.

Currently the best achieved sunlight conversion rate (solar panel efficiency) is around 21% in commercial products[3], typically lower than the efficiencies of their cells in isolation. The energy density of a solar panel is the efficiency described in terms of peak power output per unit of surface area, commonly expressed in units of watts per square foot (W/ft2). The most efficient mass-produced solar panels have energy density values of greater than 13 W/ft2 (140 W/m2).

Most solar modules are currently produced from silicon photovoltaic cells. These are typically categorized as monocrystalline or polycrystalline modules.

In rigid thin film modules, the cell and the module are manufactured in the same production line.

The main cell technologies in this category are CdTe, or a-Si, or a-Si+uc-Si tandem, or CIGS (or variant). Amorphous silicon has a sunlight conversion rate of 6-12%.

Flexible thin film cells and modules are created on the same production line by depositing the photoactive layer and other necessary layers on a flexible substrate.

If the substrate is an insulator (e.g. polyester or polyimide film) then monolithic integration can be used.

If it is a conductor then another technique for electrical connection must be used.

The cells are assembled into modules by laminating them to a transparent colourless fluoropolymer on the front side (typically ETFE or FEP) and a polymer suitable for bonding to the final substrate on the other side. The only commercially available (in MW quantities) flexible module uses amorphous silicon triple junction (from Unisolar).

The requirements for residential and commercial are different in that the residential needs are simple and can be packaged so that as solar cell technology progresses, the other base line equipment such as the battery, inverter and voltage sensing transfer switch still need to be compacted and unitized for residential use. Commercial use, depending on the size of the service will be limited in the photovoltaic cell arena, and more complex parabolic reflectors and solar concentrators are becoming the dominant technology.

The global flexible and thin-film photovoltaic (PV) market, despite caution in the overall PV industry, is expected to experience a CAGR of over 35% to 2019, surpassing 32 GW according to a major new study by IntertechPira.[4]

Several companies have begun embedding electronics into PV modules. This enables performing [[[maximum power point tracking]] (MPPT) for each module individually, and the measurement of performance data for monitoring and fault detection at module level. Some of these solutions make use of power optimizers, a DC-to-DC converter technology developed to maximize the power harvest from solar photovoltaic systems. As of about 2010, such electronics can also compensate for shading effects, wherein a shadow falling across a section of a panel causes the electrical output of one or more strings of cells in the panel to fall to zero, but not having the output of the entire panel fall to zero.

Module performance is generally rated under standard test conditions (STC): irradiance of 1,000 W/m², solar spectrum of AM 1.5 and module temperature at 25°C.

Nominal voltage refers to the voltage of the battery that the module is best suited to charge; this is a leftover term from the days when solar panels were used only to charge batteries. The actual voltage output of the panel changes as lighting, temperature and load conditions change, so there is never one specific voltage at which the panel operates. Nominal voltage allows users, at a glance, to make sure the panel is compatible with a given system.

Open circuit voltage or VOC is the maximum voltage that the panel can produce when not connected to an electrical circuit or system. VOC can be measured with a meter directly on an illuminated panel's terminals or on its disconnected cable.[5]

The peak power rating, kWp, is the maximum output according under standard test conditions (not the maximum possible output).

Solar panels must withstand heat, cold, rain and hail for many years. Many crystalline silicon module manufacturers offer a warranty that guarantees electrical production for 10 years at 90% of rated power output and 25 years at 80%.[6] 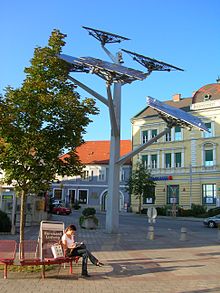 The "solar tree", a symbol of Gleisdorf, Austria

15.9 GW of solar PV system installations were completed in 2010, with solar PV pricing survey and market research company PVinsights reporting growth of 117.8% in solar PV installation on a year-on-year basis. With over 100% year-on-year growth in PV system installation, PV module makers dramatically increased their shipments of solar panels in 2010. They actively expanded their capacity and turned themselves into gigawatt GW players. According to PVinsights, five of the top ten PV module companies in 2010 are GW players. Suntech, First Solar, Sharp, Yingli and Trina Solar are GW producers now, and most of them doubled their shipments in 2010.[7]

Average pricing information divides in three pricing categories: those buying small quantities (modules of all sizes in the kilowatt range annually), mid-range buyers (typically up to 10 MWp annually), and large quantity buyers (self explanatory—and with access to the lowest prices). Over the long term—and only in the long-term—there is clearly a systematic reduction in the price of cells and modules. For example in 1998 it was estimated that the quantity cost per watt was about $4.50, which was 33 times lower than the cost in 1970 of $150.[8][9]

Following to RMI, Balance-of-System (BoS) elements, this is, non-module cost of non-microinverter solar panels (as wiring, converters, racking systems and various components) make up about half of the total costs of installations. Also, standardizing technologies could encourage greater adoption of solar panels and, in turn, economies of scale.[citation needed]

Solar trackers increase the amount of energy produced per panel at a cost of mechanical complexity and need for maintenance. They sense the direction of the Sun and tilt the panels as needed for maximum exposure to the light.

Fixed racks hold panels stationary as the sun moves across the sky. The fixed rack sets the angle at which the panel is held. Tilt angles equivalent to an installation's latitude are common. 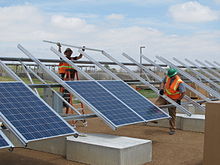 Ground mounted solar power systems consist of solar panels held in place by racks or frames that are attached to ground based mounting supports.

Ground based mounting supports include: 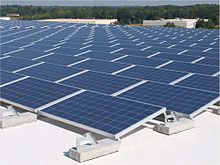 Roof based mounting supports include: