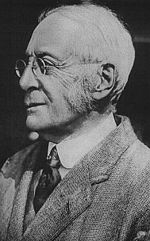 Eliot had stated in speeches that the elements of a liberal education could be obtained by spending 15 minutes a day reading from a collection of books that could fit on a five-foot shelf. (Originally he had said a three-foot shelf.) The publisher P. F. Collier and Son saw an opportunity and challenged Eliot to make good on this statement by selecting an appropriate collection of works, and the Harvard Classics was the result.

Eliot worked for one year with William A. Neilson, a professor of English; Eliot determined the works to be included and Neilson selected the specific editions and wrote introductory notes.[1] Each volume had 400-450 pages, and the included texts are "so far as possible, entire works or complete segments of the world's written legacies."[2] The collection was widely advertised by Collier and Son, in Collier's Magazine and elsewhere, with great success.

The Harvard Classics Shelf of Fiction

The Harvard Classics Shelf of Fiction was selected by Charles W. Eliot, LLD (1834-1926), with notes and introductions by William Allan Neilson. It also features an index to Criticisms and Interpretations.

As Adam Kirsch, writing for Harvard magazine in 2001, notes, "It is surprisingly easy, even today, to find a complete set of the Harvard Classics in good condition. At least one is usually for sale on eBay, the Internet auction site, for $300 or so, a bargain at $6 a book. The supply, from attics or private libraries around the country, seems endless — a tribute to the success of the publisher, P.F. Collier, who sold some 350,000 sets within 20 years of the series' initial publication."[1]

Currently, a hardcover set of the Harvard Classics (now in the public domain) is published by Easton Press and a paperback version by Kessinger Publishing.

The concept of education through systematic reading of seminal works themselves (rather than textbooks), was carried on by John Erskine at Columbia University, and, in the 1930s, Mortimer Adler and Robert Hutchins at the University of Chicago, carried this idea further with the concepts of education through study of the "great books" and "great ideas" of Western civilization. This led to the publication in 1952 of Great Books of the Western World, which is still in print and actively marketed. In 1937, under Stringfellow Barr, St. John's College introduced a curriculum based on the direct study of "great books". These sets are popular today with those interested in homeschooling.