This article is about the theories and mathematics of climate modeling. For computer-driven prediction of Earth's climate, see Global climate model. 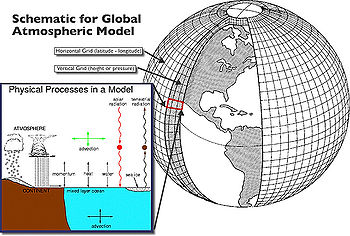 Climate models are systems of differential equations based on the basic laws of physics, fluid motion, and chemistry. To “run” a model, scientists divide the planet into a 3-dimensional grid, apply the basic equations, and evaluate the results. Atmospheric models calculate winds, heat transfer, radiation, relative humidity, and surface hydrology within each grid and evaluate interactions with neighboring points.

Climate models use quantitative methods to simulate the interactions of the atmosphere, oceans, land surface, and ice. They are used for a variety of purposes from study of the dynamics of the climate system to projections of future climate. The most talked-about use of climate models in recent years has been to project temperature changes resulting from increases in atmospheric concentrations of greenhouse gases.

Models can range from relatively simple to quite complex:

This is not a full list; for example "box models" can be written to treat flows across and within ocean basins. Furthermore, other types of modelling can be interlinked, such as land use, allowing researchers to predict the interaction between climate and ecosystems.

Box models are simplified versions of complex systems, reducing them to boxes (or reservoirs) linked by fluxes. The boxes are assumed to be mixed homogeneously. Within a given box, the concentration of any chemical species is therefore uniform. However, the abundance of a species within a given box may vary as a function of time due to the input to (or loss from) the box or due to the production, consumption or decay of this species within the box.

Simple box models, i.e. box model with a small number of boxes whose properties (e.g. their volume) do not change with time, are often useful to derive analytical formulas describing the dynamics and steady-state abundance of a species. More complex box models are usually solved using numerical techniques.

Box models are used extensively to model environmental systems or ecosystems and in studies of ocean circulation and the carbon cycle.[1]

The constant πr2 can be factored out, giving

Solving for the temperature,

This yields an average earth temperature of 288 K (15 °C; 59 °F).[4] This is because the above equation represents the effective radiative temperature of the Earth (including the clouds and atmosphere). The use of effective emissivity and albedo account for the greenhouse effect.

This very simple model is quite instructive, and the only model that could fit on a page. For example, it easily determines the effect on average earth temperature of changes in solar constant or change of albedo or effective earth emissivity. Using the simple formula, the percent change of the average amount of each parameter, considered independently, to cause a one degree Celsius change in steady-state average earth temperature is as follows:

This simple model readily determines the effect of changes in solar output or change of earth albedo or effective earth emissivity on average earth temperature. It says nothing, however about what might cause these things to change. Zero-dimensional models do not address the temperature distribution on the earth or the factors that move energy about the earth.

The zero-dimensional model above, using the solar constant and given average earth temperature, determines the effective earth emissivity of long wave radiation emitted to space. This can be refined in the vertical to a zero-dimensional radiative-convective model, which considers two processes of energy transport:

The radiative-convective models have advantages over the simple model: they can determine the effects of varying greenhouse gas concentrations on effective emissivity and therefore the surface temperature. But added parameters are needed to determine local emissivity and albedo and address the factors that move energy about the earth.

Effect of ice-albedo feedback on global sensitivity in a one-dimensional radiative-convective climate model.[9][10][11]

The zero-dimensional model may be expanded to consider the energy transported horizontally in the atmosphere. This kind of model may well be zonally averaged. This model has the advantage of allowing a rational dependence of local albedo and emissivity on temperature – the poles can be allowed to be icy and the equator warm – but the lack of true dynamics means that horizontal transports have to be specified.[12]

Depending on the nature of questions asked and the pertinent time scales, there are, on the one extreme, conceptual, more inductive models, and, on the other extreme, general circulation models operating at the highest spatial and temporal resolution currently feasible. Models of intermediate complexity bridge the gap. One example is the Climber-3 model. Its atmosphere is a 2.5-dimensional statistical-dynamical model with 7.5° × 22.5° resolution and time step of half a day; the ocean is MOM-3 (Modular Ocean Model) with a 3.75° × 3.75° grid and 24 vertical levels.[13]

Three (or more properly, four since time is also considered) dimensional GCM's discretise the equations for fluid motion and energy transfer and integrate these over time. They also contain parametrisations for processes—such as convection—that occur on scales too small to be resolved directly.

Atmospheric GCMs (AGCMs) model the atmosphere and impose sea surface temperatures as boundary conditions. Coupled atmosphere-ocean GCMs (AOGCMs, e.g. HadCM3, EdGCM, GFDL CM2.X, ARPEGE-Climat)[14] combine the two models. The first general circulation climate model that combined both oceanic and atmospheric processes was developed in the late 1960s at the NOAA Geophysical Fluid Dynamics Laboratory[15] AOGCMs represent the pinnacle of complexity in climate models and internalise as many processes as possible. However, they are still under development and uncertainties remain. They may be coupled to models of other processes, such as the carbon cycle, so as to better model feedback effects.

Most recent simulations show "plausible" agreement with the measured temperature anomalies over the past 150 years when forced by natural forcings alone, but better agreement is achieved when observed changes in greenhouse gases and aerosols are also included.[16][17]

There are three major types of institution where climate models are developed, implemented and used:

Climate models on the web