/koʊˈnaɪ.əm/ or /ˈkoʊniəm/) is a genus of two species of highly poisonous perennial herbaceous flowering plants in the family Apiaceae, native to Europe and the Mediterranean region as Conium maculatum, and to southern Africa as Conium chaerophylloides. 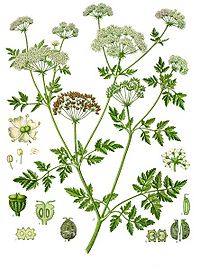 By far the most familiar species is Conium maculatum (Hemlock or Poison Hemlock). It is a herbaceous biennial plant which grows between 1.5–2.5 metres (5–8 ft) tall, with a smooth green stem, usually spotted or streaked with red or purple on the lower half of the stem. The leaves are finely divided and lacy, overall triangular in shape, up to 50 centimetres (20 in) long and 40 centimetres (16 in) broad. The flowers are small, white, clustered in umbels up to 10–15 centimetres (4–6 in) across. When crushed, the leaves and root emit a rank, unpleasant odour often compared to that of parsnips.

Conium maculatum is known by several common names. As well as the English "Poison hemlock" and the Irish "Devil's Porridge", there are also Beaver Poison, Herb Bennet (not to be confused with the geranium of that name), Musquash Root, Poison Parsley, Spotted Corobane and Spotted Hemlock. The seeds are sometimes called Kecksies or Kex. 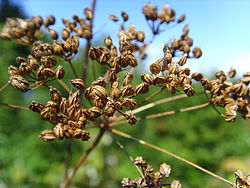 Conium maculatum is native in temperate regions of Europe, West Asia, as well as North Africa. It has been introduced and naturalised in many other areas, including Asia, North America, Australia, and New Zealand.[1] It is often found on poorly drained soils, particularly near streams, ditches, and other surface water. It also appears on roadsides, edges of cultivated fields, and waste areas.[1] It is considered an Invasive species in twelve U.S. states, including California.[2]

Conium maculatum grows in damp areas. It is used as a food plant by the larvae of some Lepidoptera species including Silver-ground Carpet. Poison hemlock flourishes in the spring, when most other forage is gone. All plant parts are poisonous but once the plant is dried, the poison is greatly reduced, although not gone completely.

C. maculatum is a weed known almost worldwide by its toxicity to many domestic animals and to human beings. It is an Apiaceae, characterized by long, hollow stems, reaching up to 2 m height at maturity, producing a large amount of lush foliage during its vegetative growth. Its flowers are white, grouped in umbels formed by numerous umbellules. It produces a large number of seeds that allow the plant to form thick stands in modified soils, sometimes encroaching on cultivated fields, to the extent of impeding the growth of any other vegetation inside the C. maculatum area of growth.

Eight piperidinic alkaloids have been identified in this species. Two of them, gamma-coniceine and coniine are generally the most abundant and they account for most of the plant's acute and chronic toxicity. These alkaloids are synthesized by the plant from eight acetate units from the metabolic pool, forming a polyketoacid which cyclises through an aminotransferase and forms gamma-coniceine as the parent alkaloid via reduction by a NADPH-dependent reductase.

The most important and toxic of these is coniine, which has a chemical structure similar to nicotine.[1][5] Coniine is a neurotoxin, which disrupts the workings of the central nervous system and is toxic to humans and all classes of livestock.[4] Ingestion in any quantity can result in respiratory collapse and death.[6] Coniine causes death by blocking the neuromuscular junction in a manner similar to curare; this results in an ascending muscular paralysis with eventual paralysis of the respiratory muscles which results in death due to lack of oxygen to the heart and brain. Death can be prevented by artificial ventilation until the effects have worn off 48–72 hours later.[1] For an adult the ingestion of more than 100 mg of coniine (approximately 6 to 8 fresh leaves, or a smaller dose of the seeds or root) may be fatal.[7]

Isolation of the alkaloids

Of the total alkaloids of hemlock isolated by the method of Chemnitius[8] and fractionally distilled, the portion boiling up to 190 °C contains most of the coniine, γ-coniceine and N-methylconiine, while conhydrine and ψ-conhydrine remain in the higher boiling residues. For the separation of coniine from coniceine, Wolffenstein[9] recommends conversion into hydrochlorides. These are dried and extracted with acetone, which dissolves coniceine hydrochloride, leaving the coniine salt, from which the base may then be regenerated. For final purification the coniine is converted into the D-hydrogen tartrate. It is sometimes necessary to start crystallisation by adding a crystal of the desired salt. von Braun[10] distills the crude mixed alkaloids until the temperature rises to 190 °C, benzoylates the distillate, extracts the tertiary bases by shaking an ethereal solution with dilute acid, pours the concentrated ethereal solution into light petroleum to precipitate most of the benzoyl-δ-aminobutyl propyl ketone formed by the action of benzoyl chloride on coniceine, distills the solvent from the filtrate and collects from the residue the fraction boiling at 200-210 °C/16 mmHg, which is nearly pure benzoylconiine (bp. 203-4 °C/16 mmHg). From this a mixture of D- and L-coniines is obtained by hydrolysis, the former predominating.

In ancient Greece, hemlock was used to poison condemned prisoners. The most famous victim of hemlock poisoning is the philosopher Socrates. After being condemned to death for impiety in 399 BC, Socrates was given a potent infusion of the hemlock plant. Plato described Socrates' death in the Phaedo[11]:

The man...laid his hands on him and after a while examined his feet and legs, then pinched his foot hard and asked if he felt it. He said "No"; then after that, his thighs; and passing upwards in this way he showed us that he was growing cold and rigid. And then again he touched him and said that when it reached his heart, he would be gone. The chill had now reached the region about the groin, and uncovering his face, which had been covered, he said – and these were his last words – "Crito, we owe a cock to Asclepius. Pay it and do not neglect it." "That," said Crito, "shall be done; but see if you have anything else to say." To this question he made no reply, but after a little while he moved; the attendant uncovered him; his eyes were fixed. And Crito when he saw it, closed his mouth and eyes.[12]

Although many have questioned whether this is a factual account, careful attention to Plato's words, modern and ancient medicine, and other ancient Greek sources point to the above account being consistent with Conium poisoning.[13]

C. maculatum is poisonous to animals. In a short time the alkaloids produce a potentially fatal neuromuscular blockage when the respiratory muscles are affected. Acute toxicity, if not lethal, may resolve in the spontaneous recovery of the affected animals provided further exposure is avoided. It has been observed that poisoned animals tend to return to feed on this plant. Chronic toxicity affects only pregnant animals. When they are poisoned by C. maculatum during the fetus's organ formation period, the offspring is born with malformations, mainly palatoschisis and multiple congenital contractures (MCC; frequently described as arthrogryposis). Chronic toxicity is irreversible and although MCC can be surgically corrected in some cases, most of the malformed animals are lost. Since no specific antidote is available, prevention is the only way to deal with the production losses caused by the plant. Control with herbicides and grazing with less susceptible animals (such as sheep) have been suggested. C. maculatum alkaloids can enter the human food chain via milk and fowl. Such losses may be underestimated, at least in some regions, because of the difficulty in associating malformations with the much earlier maternal poisoning.[14]

Poison hemlock has been used as a sedative and for its antispasmodic properties.[citation needed] It was also used by Greek and Persian physicians for a variety of problems, such as arthritis.[citation needed] It wasn't always effective, however, as the difference between a therapeutic and a toxic amount (the therapeutic index) is very slight. Overdoses can produce paralysis and loss of speech, followed by depression of the respiratory function, and then death.