This is the title screen of the game.

Napoleon Senki (ナポレオン戦記?, "Battles of Napoleon")[3] is a 1988 Family Computer strategy video game from Irem that allows the player to re-enact the Napoleonic Wars using a bird's-eye view.[2] The game includes all the major nations involved in the Napoleonic Wars including Czarist Russia and Great Britain.[4] The original release price of the game was 5,500 yen (roughly $45 USD).

The game commences with the earliest battles against the Holy Roman Empire to grab territory for the fledging French Republic during the French Revolutionary Wars in the year 1796 (the French Revolutionary Wars would end in 1802).[4] This land would now be considered Italian territory and the battle was equally important in Italian history as it was in French history. There are also battles in what would now considered to be the Arab Republic of Egypt against the Ottoman Empire along with various other conquests in Europe. 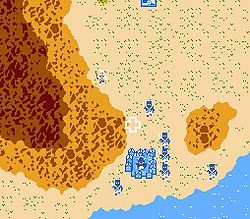 This is a screenshot of a player re-enacting one of Napoleon Bonaparte's earliest campaigns.

Before each a battle, a summary screen is revealed (stating the situation and the military strength of each of the forces).[4] There is also a simple map of Europe with dots on it so the player always knows the exact location of all the possible battles.[4] However, the map information is given out in Japanese.[2] An interesting feature of the time was that the altitude of mountains were accurately depicted in the actual battlefields. The deeper the color was, the higher the altitude of the mountain was. For example, light brown represents small hills while dark brown either represents gigantic mountains or the large peaks of a mountain.

The object is to win each battle using late 18th and early 19th century warfare tactics so that Napoleon Bonaparte has a chance of conquering all of Europe. Infantry, artillery (cannonballs give them the ability to blow up walls), and cavalry must be properly used for victory and a successful re-enactment of France's unique and colorful past. Soldiers are divided into three categories: friendly soldiers, potential defects, and enemy soldiers. Friendly soldiers must be given commands of north, south, east, west or halt.[5] When a player confront a group of potential defects, there is no battle and the soldiers in the unit of defects joins the platoon that discovered them. Enemy troops can be fought either automatically or manually (with commands of advance, retreat, sideways, or halt can be given to each individual soldier).[5]